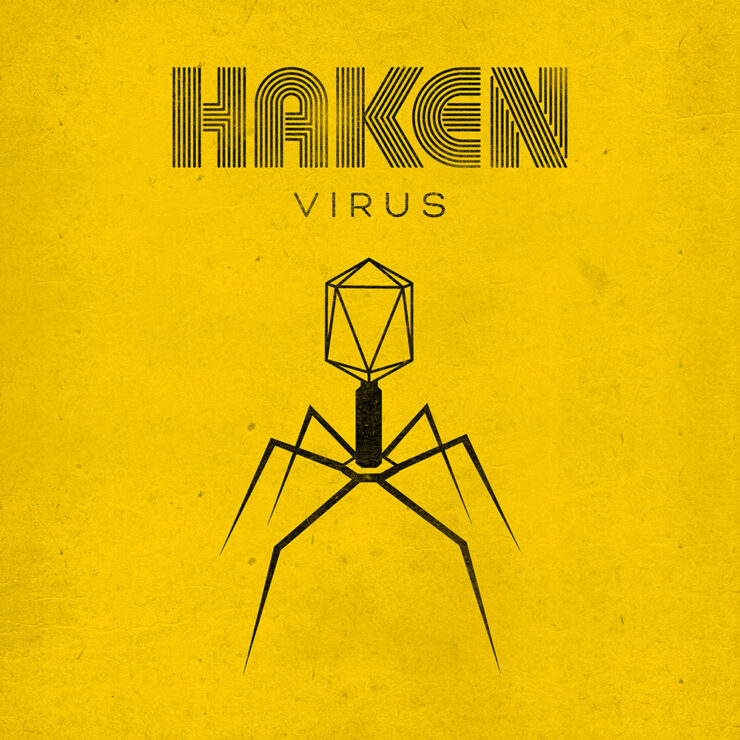 While the globe spins in chaos, the music world has struggled in how to move forward, as well. Some bands have delayed releases, while some have used the time to prepare new material. Then there is the case with Haken’s sixth studio album, Virus. The album, and perhaps unfortunately timed title, was actually conceived nearly two years ago, during the Vector writing sessions where the group had devised the concept for a second album to be a continuation of its predecessor. In case there is any doubt, referring back to 2018’s Vector album credits reveals the band offering, “A huge thanks for all our fans for your support. Keep spreading the virus.” Fortunately, for all prog metal fans, the group decided to forge ahead with the release and are set to release what is perhaps their best work. Haken has done an admirable task in observing all the details which will please the established fan base, while expanding their musical palette to invite a larger fan base.

In a recent interview with The Prog Report, guitarists Charlie Griffiths and Rich Henshall explain the collective enthusiasm the band shared during their recent tour with Devin Townsend, as they would gather after every show on their tour bus which they made into a makeshift writing studio. This is the environment which they would continue to forge their collaborative compositional efforts into what is their most expansive musical delivery to date.

The new album does not begin with the band’s customary mood-setting instrumental short track but rather with a heavy assault on the senses. The first released track and video, “Prosthetic,” is a full on fast and powerful 7-string guitar assault with machine gun-like entrance by Hearn’s continued maturity and mastery of the drums. The track has a strong chorus delivered by Jennings’s signature vocals. Second track “Invasion” delivers on a groove which starts out in a quiet manner but by songs end, continues building a heavier vibe as Haken cleverly prevents monotony from setting in and the tension it builds is palpable.

The next three tracks are what fans of The Mountain will find as refreshing and pleasing. These represent offerings where the melodic aspect is at the forefront while still incorporating the heavy and technical aspect the prog-metal diehards long for. “Carousel” is a sublime 10-minute ‘mini-epic’ which covers a very broad spectrum of styles with great vocal melodies and choruses. Meanwhile, “The Strain” and “Canary Yellow” are shorter songs which further illustrate the band’s growth in putting together very strong songs irrelevant of style or song length. In order to maintain unity with Vector, Haken once again bring in the masterful skills of esteemed engineer Adam “Nolly” Getgood (Periphery, Devin Townsend) to combine the delicate and the powerful into a pristine setting, which is exemplified in these three tracks.

What comes next is the result of what Ray Hearne has explained as the bands deeper exploration to the musical and lyrical themes of the “Cockroach King.” What is, up to date, their most popular song, is back at the epicenter of their 17-minute epic “Messiah Complex”. Divided into 5 tracks, this delivers in satisfying all things Haken. There are all sorts of references to past musical themes which will keep die-hards locked in to identifying the hidden “eggs” as well as continuing the story of how it all ties together. Warning – in as much as Haken has put together a story, they have clearly stated they really leave enough space in order for it to be open for interpretation. This will have all the blogs, chat groups, and zoom meetings buzzing with discussion. Musically, “Messiah Complex” kicks off with the incredibly memorable and melodic “Ivory Tower” and weaves through complete mayhem before reaching a perfect climax with the last two sections “The Sect” and “Ectobius Rex”. No doubt, several detailed listening sessions are needed to properly digest one of what will certainly be hailed as their next masterpiece.

Closing the album is the subdued “Only Stars” which reprises the repeating haunting melody which is first introduced in Vector’s opening track closing the circle in a quiet and haunting style. This leaves the listener with the cathartic sense of closure. While originally conceived as a continuation of Vector, Virus also performs very well as a stand-alone album in its own right.

Timing is everything. During these unprecedented times of heavily restricted activity which has tragically affected the lives of many and their loved ones around our planet due to a literal virus, perhaps this figurative Virus birthed over two years ago will bring relief to the music-hungry prog fan. Haken deliver a powerful statement with Virus, one that will have this album on many end of the year “Best-Of” lists. It does what great music is meant to do, takes you on a journey. And with ‘Virus’, Haken continue their journey atop the prog mountain.

Released on July 24th, 2020 on InsideOutMusic