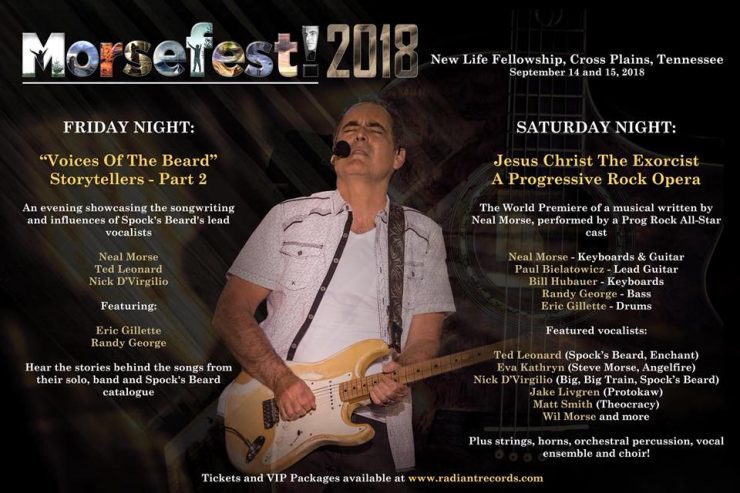 Morsefest was just announced for this September with a few surprises. The annual event held in Neal Morse’s hometown of Nashville, TN, has been typically based on full album performances. Now for this 5th installment, Morse has decided to premiere the musical he has been working on called “Jesus Christ – The Exorcist.” There are plenty of guests which you can see below. Tickets are on sale now.
FRIDAY NIGHT (9/14):
“VOICES OF THE BEARD – STORYTELLERS PART 2”
An evening showcasing the songwriting and influences of Spock’s Beard’s lead vocalists Neal Morse, Ted Leonard, and Nick D’Virgilio. Featuring Eric Gillette and Randy George. Hear the stories behind the songs from their solo, band, and Spock’s Beard catalogue!

You can hear a sample of the opera here: https://s3.amazonaws.com/radiant_records/Audio/Sample+of+Jesus+Christ+The+Exorcist.mp3

Take advantage of this once-in-a-lifetime experience and reserve your spot now! For a complete itinerary of the weekend and more info on tickets and VIP packages, head to: www.radiantrecords.com.