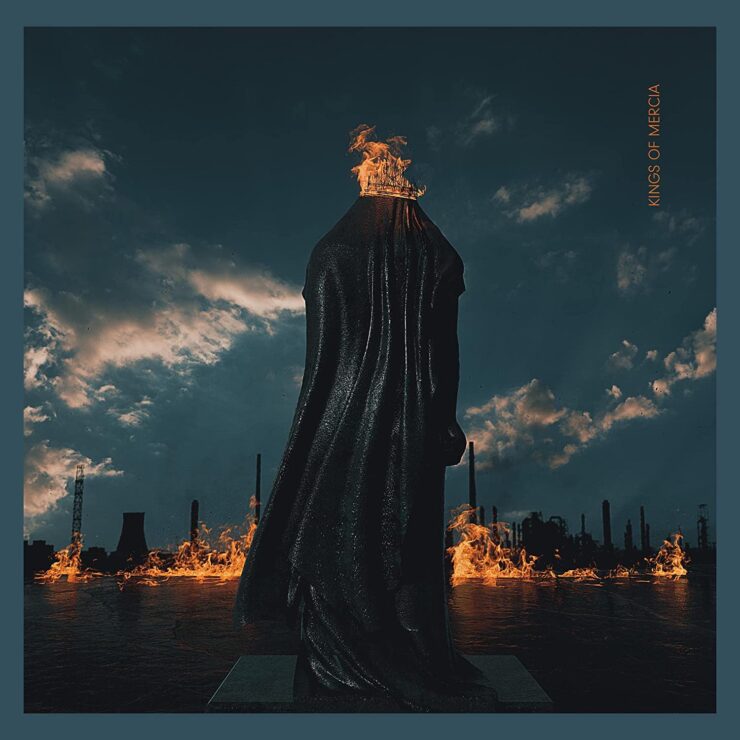 What do you do when you’ve been the creative force behind a progressive metal band for 4 decades? You shift gears & make an amazing melodic hard rock album! That’s precisely what Jim Matheos, guitarist & mastermind behind foundational Prog band Fates Warning, decided was his next move. A quick call to famed FM singer Steve Overland to inquire about a collaboration, and Kings of Mercia was born.

With Fates seemingly done (at least as far as new recordings go), Matheos took stock of his options. His first move was to create some relatively straightforward, at least for him, hard rock songs in demo form. Once Overland laid his bluesy/AOR vocal melodies on top they added bassist Joey Vera (Fates Warning/Armored Saint) and legendary drummer Simon Phillips (Toto, etc) to the mix.

On the lead-off track “Wrecking Ball”, those familiar with FW will recognize Matheos’ signature guitar style right out of the gate. Overland’s vocal comes in smooth as honey with just the right amount of grit to make it interesting. His vocal harmonies throughout & his high tenor voice have the makings of pure AOR magic. On track 2, “Humankind”, he sounds like a heyday Paul Rogers yet with crisp, tight & modern production.

Jim Matheos is well known in progressive rock circles for his heavy, yet complex riffs. It would be an oversimplification to just call Kings of Mercia “hard rock”…AC/DC this is not. Certainly you can tap your toe to it (without losing the beat!) but it also has a drive to it that gets better with each listen of the album. Unsurprisingly, his guitar solos blaze & really stand out and contrast well with the more blues-rock vocals.

Admittedly, and to my shame, I am not familiar with the band FM. I’ve certainly heard the name for decades but never really broached their catalog. If Steve Overland’s contributions here are any indication, that will be changing very soon. His voice is amazing! Powerful, bluesy & melodic with a deep rich tone that reminds me of the best of Rainbow, Deep Purple, Bad Company and even latter-day Europe.

It should be noted that the rhythm section really holds down the grooves throughout the album. Joey Vera has a bit of that angry bass sound that he’s so good at coaxing from his instrument. Simon Phillips, who has played w/ Steve Hackett, Asia, Jeff Beck, Joe Satriani, Derek Sherinian, The Who & about 900 other bands, perfectly plays what each song needs. In the pocket, sublime but not overly complicated fills and always propelling the song forward.

Songs like “Liberate Me” and “Set The World On Fire” are perfect examples of what this band is capable of creating. Driving bass/drum/guitar rhythms, super catchy choruses and, on the latter, even a touch of electronics that Matheos is known to dabble in. “Too Far Gone” starts & ends as a ballad but morphs into a mid tempo rocker that wouldn’t be out of place on a Journey or Foreigner record. “Everyday Angels” is as beautiful a ballad as I’ve heard in years & “Your Life” arrives to close the album with an almost Zeppelin-esque bombast. It’s an inspiring call to the listener to take charge – “this is YOUR life!”.

Kings of Mercia has signed a 3 album deal with Metal Blade records. By all accounts this is a full blown band and not just another one-off super group or project. This band truly is a hybrid: it’s heavy, but not metal. It’s got tones of melodic AOR hard rock, but with an edge. If I had to levy a complaint it would be the running time of 46 minutes leaves the listener wanting more, which I suspect was very much intentional. Definitely a very promising debut album & we can only hope there will be many more in the years to come!

The album is available on CD, LP, and digital formats.
Pre-order here: https://www.metalblade.com/kingsofmercia/