Kindo – Happy However After (Album Review) 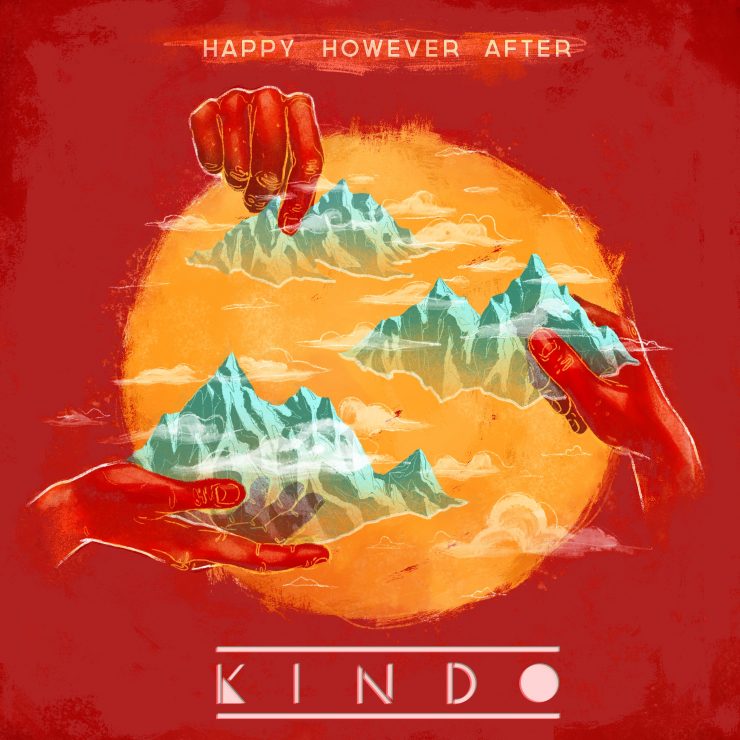 Review of the new album by Kindo – Happy However After.

A couple of years ago, I went to a Pain of Salvation concert and there was this one band called The Reign of Kindo listed as the opening act. They played just one short set, but it was convincing enough to make me buy every record they had available at the merch table. The Reign of Kindo originated in Buffalo, NY and released their first EP in 2006. Every one of their tracks since then have been produced in-house by the band, engineered & mixed by frontman Joey Secchiaroli. Just recently they have become an independent band, and even with no record label involved, they could still count on their fans to fund the newest record through Patreon. Now rebranded as just Kindo, they have become a highly established band with a diverse and ever expanding catalogue that have just released their 4th studio album Happy However After.

It can be difficult to explain what Kindo sounds like without listening to them yourself. Their own description is “Piano-Driven Alt-Jazz with rock riffs, pop vocals with Latin and R&B music influence” – what a mouthful! But don’t feel overwhelmed. Every record they’ve put out is filled with diverse, inspired tracks covering multiple genres, and their most recent release is no exception.

Happy However After opens with the track “Human Convention”, which starts with some calm keyboard pads followed by singer Joey Secchiaroli’s first verse. Then, the song kicks off with all the funky beats you’d hear in a Kindo classic and it keeps delivering, from the elaborate harmonies to the changing tempos and time signature to parts dedicated to percussion, brass section and even synthesizers – which weren’t as present in prior albums compared to this one. This first taste is enough to make you think “this album will be a journey”.

Moving on to “Catch the Gleam”, a beautiful ballad highlighting great harmony between strings and vocals. The second part of this song stands out in particular by turning the chorus melody into the backbone of the bridge – with outstanding lyrics on top of it. It has a breathtaking arrangement that elevates to glorious heights by the end of the song. It’s already easy to notice how Secchiaroli has done an amazing job over the years at expanding his range and hitting higher notes. He has never sounded this good.

“Let Me Be” is where the Latin music influence starts to show up in full force, especially in the intro’s percussion section. The main guitar theme leads into a great drum rhythm throughout the verses and chorus. There’s a great blend of keyboard sounds, from the main-stay piano to the return of the synths. Lots of space here for bass player Jeffrey Jarvis to show off some creative lines and it makes the song even more delightful to listen to. And the chorus won’t be out of your head anytime soon.

Track #4 “One in a Million” is Kelly Sciandra and Danny Pizarro’s time to shine. They explore an incredible variety of keyboard sounds all the way through this song while the band carries the same energy with mastery. We go into a strong guitar solo by John Baab until the song finishes with the chorus scaling up in a majestic way.
Smell of a Rose starts off in what seems to be a standard pop-rock tune. But don’t be fooled, Kindo is committed to always surprising you. When the song reaches its middle point, they will throw so many different elements in there, I promise you’ll feel like clapping along. It’s so much fun that it feels like a party – it’s probably the horns.

Halfway through the album, we have their newest single “Return to Me.” It starts off quite similar to how Human Convention does in the beginning of the record – a smooth piano paired with Joey’s vocals – but then it goes to a completely different and not as fast-paced direction. Every instrument line is in perfect unison in what starts off as a seemingly simple ballad that then evolves in a much broader number. This is a great example of the artist playing with the listener’s expectations, there are so many twists and turns behind an extremely well written song.

Frontman Joey Secchiarolli delivers yet another stellar performance in “About Love,” my personal favorite in this album. As soon as the brilliant vocal section ends, the instrumental section kicks in and starts to add layers on top of layers in an extremely elegant way. The bonus is the engaging lyrics that keep you invested in the incredible atmosphere that this song achieves. About Love is proof that artists can always reinvent themselves with great success, and on top of that it is the absolute climax of Happy However After.

“Colder Than December” is the simplest song in the record – and that’s not a bad thing. Another track closer to the pop side, it follows the usual verse-chorus formula, but with Kindo magic. In an album like this, it can get overshadowed by some of the other tracks, but it’s still a great song. Remember, less is more.

Second-to-last track “Obsolete” emphasizes this album’s top notch sound production. On this song the band took a very different approach from the rest of the record. The ambience is a bit gloomier, focusing on the technology theme. Drums and bass lead the way, while keyboards accentuate the main chords & melody. The vocal line is outstanding, mixing high and low notes without stumbling. One trippy guitar solo later, a spacey robot version of Joey sings the chorus one last time before ending in a very psychedelic manner.

We finally reach “City of Gods.” This one feels like the best of both old and new Kindo had a baby – combining the piano-driven groovy feels from classics like Til We Make Our Ascent and The Thrill of the Fall with the bit heavier guitars and excellent addition of synthesizers. Instrumental breakdowns, crazy solos, classic GC percussion and a wonderful performance by drummer Steven Padin. There’s a slice of everything here and it sounds wonderful. The final chorus concludes and we’re segued into an exceptional outro instrumental section. It fades out in a very tasteful way closing Happy However After masterfully.

Kindo is a unique band. After a handful of albums out, it really feels like they crafted their own style – although they won’t call themselves a “prog” band per se, we’ll gladly welcome them into our world. Joey Secchiaroli and co. keep delivering amazing record after amazing record, I’m afraid their fans might just be too spoiled with good music by now. I always referred to them as “a band you can recommend to anyone”, and this new album still falls in line with that. “Happy However After” is, indeed, a journey. And it is also one of the more enjoyable albums you will hear this year.

Tracklist:
1 Human Convention
2 Catch The Gleam
3 Let Me Be
4 One In A Million
5 Smell Of A Rose
6 Return To Me
7 About Love
8 Colder Than December
9 Obsolete
10 City Of Gods

happy however after kindo prog rock reign of kindo