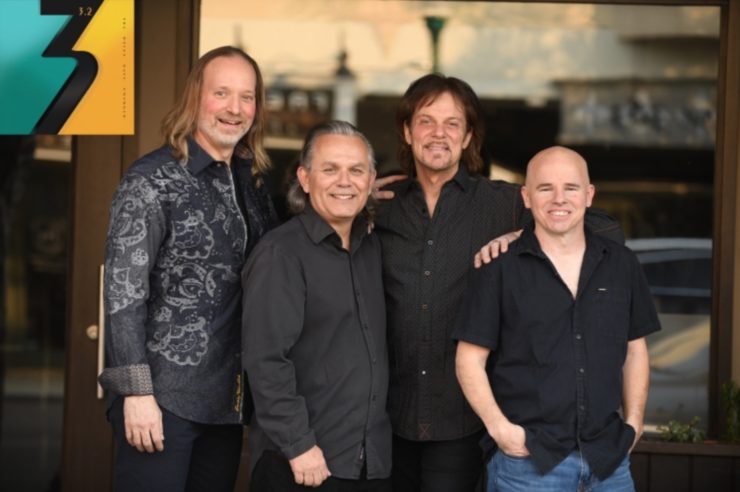 Keyboard veteran Andrew Colyer has secured possibly one of the most difficult gigs today – covering keyboard parts made legendary by Keith Emerson, Rick Wakeman, Jordan Rudess and Tony Banks! Andrew will be performing with 3.2 featuring Robert Berry this coming spring! If anyone is qualified for the position, it’s Andrew who has performed and collaborated with the likes of Tony Levin (Peter Gabriel, King Crimson), Jon Anderson (YES), The Tubes, Sound of Contact featuring Simon Collins, Ryche Chlanda (Fireballet, Renaissance), Max Flyer (CBS Records), Clark Terry, Louis Bellson among others….not to mention his own band, Prog-award-nominated Circuline!

Keith Emerson left a legacy of music. From his beginnings with The Nice in the 1960’s, to worldwide fame with Emerson Lake & Palmer in the 1970’s, to his reinvention in the 1980’s with the #9 Billboard hit “Talkin’ Bout” in the band “3” with Robert Berry and Carl Palmer, Emerson’s name is one almost everyone has heard of.

In 2015, Emerson reunited with Berry, to resume work on the second “3” album, titled “3.2”, to be released on the Frontiers label. In 2016, Emerson tragically took his own life, leaving behind a half-finished record, Robert Berry with the loss of his long-time personal and musical friend, an unfulfilled contract, and a world grieving.

By the spring of 2018, Berry had worked out the details with the Emerson estate and Frontiers to complete and release the record. The first single, “Somebody’s Watching” (released May 22nd), sent the album debut to #3 on the Amazon hard rock charts, and generated 7,000 YouTube views in the first 36 hours, and over 12,000 views in the first week. A musical phoenix had indeed risen.

The album, “3.2 – The Rules Have Changed”, was released on August 10th, 2018, and hit #1 on Amazon, selling out on the first day, and placed on two Billboard charts. The two YouTube videos from the album currently have over 64,000 cumulative views. The new album has met with unanimous positive international acclaim from over 100 magazine articles, blog and website reviews, and FM and internet radio stations.

Now it’s time for a tour. The band – “3.2 featuring Robert Berry” will not only cover Berry’s work with Keith Emerson, but also Berry’s years on the Magna Carta label, producing tribute albums to ELP, YES, Genesis, Jethro Tull, Pink Floyd, and Rush. Who will Robert Berry get to cover not only Keith Emerson, but also all the keyboard players from these legendary bands? The world is watching and wondering. Keyboardist/vocalist Andrew Colyer (Circuline, Cell15, Awaken, Prog Rock Orchestra) got the call.

Berry tells the story of how Colyer got the gig: “When I met Andrew in December 2011, he was trying to reignite a career in music, after being out of the game for over 20 years. After one of our December People ‘Classic Rock Christmas Party’ shows, I introduced him to Dave Medd, and that’s how he got the job as the backup for The Tubes in 2012. By 2013 he was playing ELP’s “Tarkus” in progressive rock tribute band Downing Grey. In 2014 he performed on the Moody Blues cruise and the YES Cruise to the Edge with the Prog Rock Orchestra. He also formed his own band, Circuline, which has released two studio albums, a live CD/DVD/Blu-ray, and has toured and performed at international festivals. Plus he’s my wife’s brother’s best friend!”

Berry says, ”All family joking aside, Andrew is a great player and the right guy for the job. He’s a super nice guy, a hard worker, and with his immersion in the music business for these past 7 years, he’s also been a big help in the business and marketing department.”

Colyer has some big boots to fill, and speaks to the naysayers. “I know there will be critics and fans who will say, ‘that’s not how Keith would have done it’, or, ‘he’s just not the same as Wakeman, Banks, or Rudess’, and I’m here to say, that’s exactly right and true. There was only one Keith Emerson, and he was one of the greatest rock keyboard players of all time. Keith was groundbreaking in his approach to playing and performing; he was the first person in the world to ever use a synthesizer on stage; it is physically, mentally, emotionally, spiritually impossible for anyone to ever replace him, or any of these other amazing keyboard players that I’m covering for the upcoming tour.”

“I am honored to have been asked to ‘fill in’ for Keith, Rick, Jordan, and Tony in their absence, and I will do my very best to faithfully serve the music that all of these great keyboard players throughout history have left for us to enjoy. All of my classical training, as well as my jazz and progressive rock experience, will be crucial in bringing this music to a live audience.”

Colyer continues, “I am also really excited to be performing with Robert Berry, who, besides being a ridiculously talented musician/composer, touring with Ambrosia, Alliance, Greg Kihn, and the holiday band December People, has also been a ‘behind the scenes’ producer for years, producing many progressive rock tribute albums for the Magna Carta label, and releasing his own solo albums. Some people have referred to Robert as a ‘crafty American version of Trevor Rabin’.”

Berry concludes, “This new 3.2 band is excited to not only have Andrew Colyer from Circuline, but also the amazing drummer/vocalist Jimmy Keegan from Spock’s Beard. I’ll be fronting the band on bass and lead vocals, and we also have monster guitarist/vocalist Paul Keller, who toured with Keith, myself, and Carl Palmer on the original ‘3’ tour in 1988. For the upcoming tour, we’ll be performing not only music from the new 3.2 album, but also music from the first 3 album, and a few hits from my back Magna Carta catalog – some songs from YES, ELP, Genesis, Jethro Tull, etc.

“In addition to all the great music, you’ll also experience first storytelling, performances, and insights from my work with Steve Howe, GTR, Ambrosia, Keith and Carl, and more. It’s a presentation of my legacy of progressive rock from the past 30 years. We hope to see you in the audience and meet you in person after the show!”