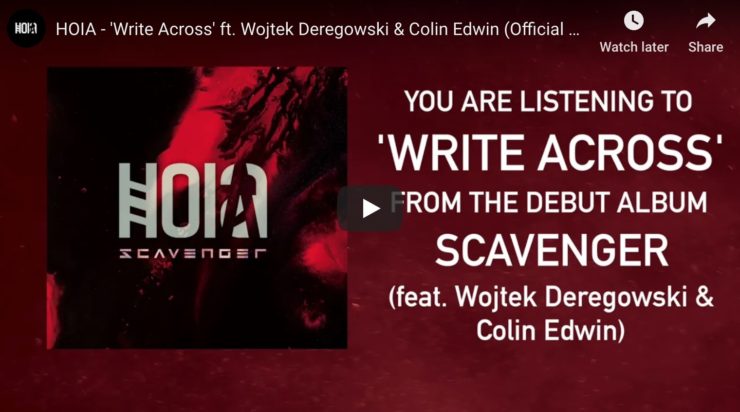 Experimental beyond expectations, HOIA is an infusion of musical interests by Prateek Rajagopal. Popularly known for being a virtuoso guitarist, budding film composer and writer/producer for death metal legions “GUTSLIT” & Indian/American prog metal supergroup “The Minerva Conduct,” his interest in genres and art forms beyond metal gave rise to HOIA, inspired by Avant-garde, progressive rock, experimental and industrial music.

After releasing two EPs with HOIA, Prateek is all set to release his debut album titled ‘Scavenger’ on April 19th, 2019. The record has a more sophisticated songwriting approach compared to his previous releases, albeit still very ‘prog,’ and also features Prateek as a vocalist for the first time. The instruments used on the album are unlike his other projects, using samples of rotating fans and vehicle sounds, analog synthesizers and digital manipulation along with organic instruments like guitars (acoustic, electric), piano and strings.

The band are pleased to premiere the track “Write Across” ft. Wojtek Deregowski & Colin Edwin (Porcupine Tree), which you can check out here:

Says Prateek, “The album deals with human-sentimentality concepts like nostalgia, demise, anxiety and the need to ‘scavenge’ to survive, bubbled in fictitious concepts as individual stories. It isn’t a concept album, but there’s a loose relation across the individual stories.”

Although he is the primary songwriter, Prateek approached Colin Edwin of “Porcupine Tree” & Wojtek Deregowski (a reputed session musician from Poland) to perform bass and drums respectively.

“In a world full of guitarists, I am lucky enough to somehow work with a steady flow of really interesting and unique players, so I am very happy to be involved with Prateek Rajagopal’s new HOIA album, a solid collection of inspiring tracks across an ever-evolving deep sonic landscape. Lots of unexpected elements which fuse together really well, with a some great twists for the adventurous listener, top stuff.” – Colin Edwin

“Even though I know all the tunes from the new HOIA album really well, I like to come back and listen to them again. It’s just a very good music in which you may always find something new that surprises and catches your attention. Fresh sounds, a lot of space and emotions at the same time. I’m really happy that I could contribute to the music by recording drum parts. Prateek gave me a lot of freedom in expressing my own style of playing so I improvised much hoping to give the music even more feelings and interesting ideas.” – Wojtek Deregowski

HOIA’s “Scavenger” has been in the works for over 2 years and clocks in at 33 minutes. The track-list is as follows:

In support of the release Prateek has plans to tour and the members are also willing to perform, but his multiple commitments in Mumbai and other projects are holding it back. A music/visualization video (by illustrator/director Aniruddh “Thebigfatminimalist” Mehta) for “Write Across,” a drum play-through of “Electric Wizard,” and an album stream video are all ready.

In closing Prateek has this to say, “The album deals with simple human emotions. However, writing them as stories felt natural and subtle, and thinking about characters/plots made the process very enjoyable. I hope that people understand the metaphors and Easter eggs too, since everyone goes through similar human emotions. So if people relate with the stories, they might feel better and less lonely, and in turn feel hopeful about life and this world.”