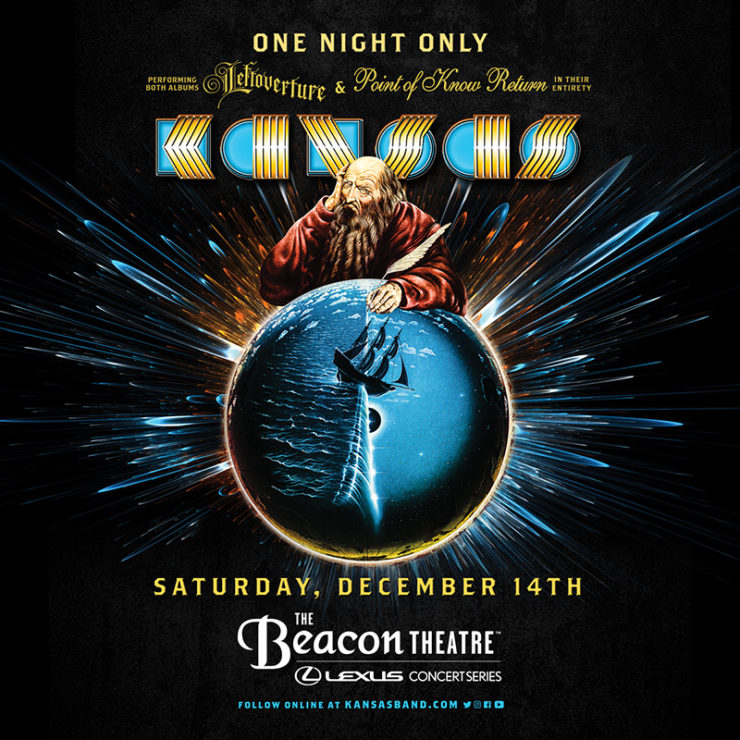 The band will perform both album in their entirety.

For one night only at The Beacon Theatre in New York City, America’s preeminent progressive rock band, KANSAS, will be performing two of rock’s most iconic albums, Leftoverture and Point of Know Return, in their entireties. On Saturday, December 14, 2019, KANSAS will be showcasing the two multi-platinum albums as well as other fan favorites.

Tickets and KANSAS VIP Packages go on sale to the general public on Friday, May 17, 2019. Ticket information can be found at www.kansasband.com.

KANSAS premiered the Leftoverture 40th Anniversary Tour in 2016 to celebrate the band’s breakthrough album. What started as a concept of 10 concerts grew to more than 80 performances in select cities throughout 2016-2017. Based on that popularity, KANSAS followed that tour up with the even more successful Point of Know Return Anniversary Tour in 2018. Those performances will extend into 2020 and have already performed to large and enthusiastic audiences in cities including Atlanta, GA; Nashville, TN; Pittsburgh, PA; Chicago, IL; St. Louis, MO; Kansas City, MO; San Antonio, TX; Dallas, TX; Indianapolis, IN; Worcester, MA; Clearwater, FL; Ft. Lauderdale, FL; Baltimore, MD; Denver, CO; San Diego, CA; Portland, OR; Seattle, WA; and Los Angeles, CA.

In 1976, KANSAS released the album Leftoverture. Containing the smash hit and million-selling single “Carry On Wayward Son,” along with fan favorites such as “The Wall,” “Miracles Out Of Nowhere,” and “What’s On My Mind,” Leftoverture became the band’s breakthrough album. The album peaked at #5 on Billboard’s Album charts and reached sextuple-platinum status with more than six million copies sold.

In 1977, KANSAS followed up the success of Leftoverture by releasing the album Point of Know Return. Containing the iconic million-selling single “Dust in the Wind,” along with fan favorites such as “Portrait (He Knew),” “Closet Chronicles,” and “Paradox,” Point of Know Return became the band’s greatest selling studio album. The album peaked at #4 on Billboard’s Album charts, reached sextuple-platinum status with more than six million copies sold, and had three Billboard Hot 100 singles.

Performances on the Point of Know Return Anniversary Tour begin with an acoustic set of some KANSAS favorites before the band breaks into an extended set featuring the traditional KANSAS “wall of sound.”

“You do not find many theaters more famous than The Beacon Theatre in New York City,” adds KANSAS guitarist Zak Rizvi. “Add in being in New York City during the holidays, as someone who grew up an avid KANSAS fan, this is a concert I would travel to attend. Between touring and recording a new album, 2019 was already set up to be incredible for the band. This concert will really cap it off.”

KANSAS is currently comprised of original drummer Phil Ehart, bassist/vocalist Billy Greer, vocalist/keyboardist Ronnie Platt, violinist/guitarist David Ragsdale, keyboardist Tom Brislin, guitarist Zak Rizvi, and original guitarist Richard Williams. Originally formed in 1973 in Topeka, KS, the band’s documentary film KANSAS: Miracles Out of Nowhere is currently being broadcast on AXSTV. KANSAS has released 15 studio albums, including its most recent release The Prelude Implicit (2016), and plans to release of another new studio album in 2020. With no signs of slowing down, KANSAS continues to ‘carry on;’ performing in front of large and enthusiastic audiences around the world.