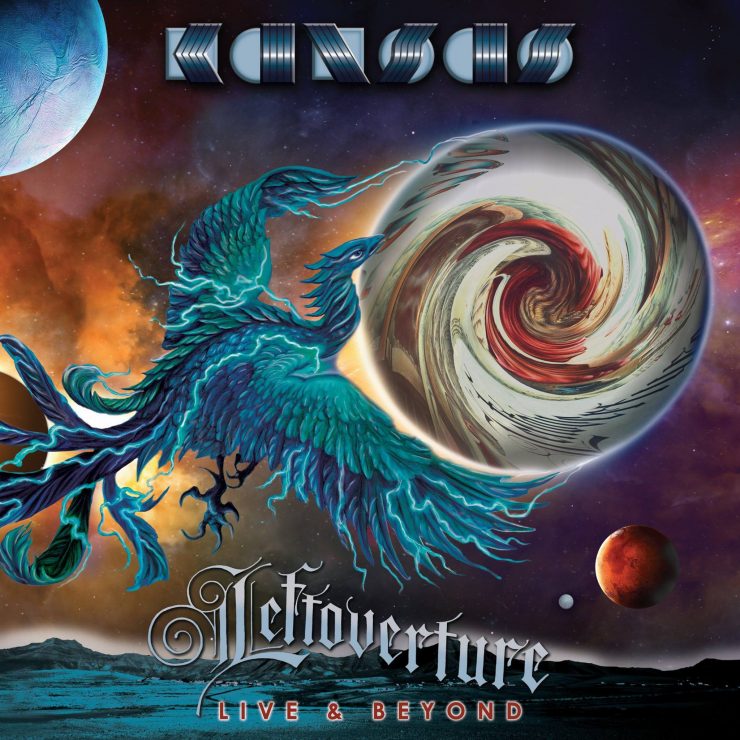 Review of the new Kansas live album – Leftoverture Live & Beyond.

Generally speaking, the live album occupies one of two roles in an artist’s larger body of work: it either documents an artist at the very top of their game, or it shamelessly fleeces fans with repackaged hits when the well of new ideas has run dry. Leftoverture Live & Beyond clearly plays the former role, and stands as Kansas’ best live album since Two for the Show. Like that classic album, Leftoverture Live & Beyond focuses on the band’s two most popular studio albums, Point of Know Return and Leftoverture, with a nice selection of other fan favorites and deep cuts to round out the setlist. This is 19 tracks and nearly 2 hours of a band in their prime, playing scorching takes of complex rock music with a seemingly tireless energy.

The dramatic tale of the “Icarus II” opens the album as the lone representative of Kansas’ studio work between 1978-2016. Paired with the heavy rocker “Icarus (Borne on Wings of Steel)”, it’s an opening salvo that quickly establishes an energy level for the rest of the set, one from which the band seldom departs except for more reflective songs like “Dust in the Wind” and “Section 60”. Violinist David Ragsdale frequently takes the spotlight, deftly weaving his sounds between and around the other instruments, and carving out melodic accents as easily as he does fiery, screeching solos. Keyboardist David Manion also turns in a star performance; when people think of Kansas, they likely think first of soaring violin and crunchy guitar riffs, but vintage synthesizers and Hammonds are just as essential to the sound, and Manion makes this clear from the synth intro to “Icarus (Borne on Wings of Steel)” to the extended solos on “Cheyenne Anthem”.

The first half of the album includes highlights such as the compact epics “Journey from Mariabronn” and “Lamplight Symphony” before a three-song run from Kansas’ latest album, The Prelude Implicit. The first of these, “Rhythm in the Spirit,” foregrounds a sound issue that is this live album’s one serious drawback. The drums are mixed a tad (maybe two) too loud, to the point of occasionally obscuring the vocals. Phil Ehart’s playing is on point and the booming sound mostly fits the situation, but the balance in the mix detracts from rather than supports the song’s heavy groove. Indeed, throughout the album there are some sonically rough patches; while some live albums are guilty of “correcting” performances to the point that it’s hardly a live document anymore, Leftoverture Live & Beyond sounds almost underproduced, more of an official bootleg direct from a (very good) soundboard mix, even to the point of including audience chatter after the last song on the album. It’s still a fantastic sounding album on the whole, but it might have achieved perfection with a more delicate hand in the mixing stage of production.

“The Voyage of Eight Eighteen”, also from The Prelude Implicit, suffers from none of these problems, and stands as one of the best tracks on the album. The energy and virtuosity on display in this epic are especially arresting, and far outreach what was heard on the (still excellent) studio version. Even before the opening chorus of “Carry On Wayward Son”, this is a strong set that offers much more than the ‘Beyond’ of the album title hints. On the Leftoverture half of the album, “Miracles Out of Nowhere” is particularly delightful and pulls off the searing solo-trading between violin and guitar. It’s also nice to hear the lesser-played “Opus Insert” and “Questions of My Childhood.” But “Magnum Opus” is the real gem, and may be even stronger here than on Two for the Show. Billy Greer’s bass is massive yet lithe in the intro, while guitarists Rich Williams and Zak Rizvi each receive ample room to flex their muscular tones. This is one of those rare band showcases that rips solos left and right while maintaining the integrity of its complex and melodic structure.

Leftoverture Live & Beyond is absolutely essential for Kansas fans, and serves notice to not-yet-fans that they are definitely missing out. This is a Kansas who are fresh and at the top of their game; the album sounds less a celebration of 40 years past and more a promise of good things to come. Founding members Ehart and Williams are playing with more energy than ever, and the setlist shows that they are having fun with both the band’s past and its future. Here’s hoping this excellent live album proves a ramp-up to new studio recordings and some album spotlight tours that delve even deeper into Kansas’ rich catalogue.

Released on November 3, 2017 on InsideOut Music