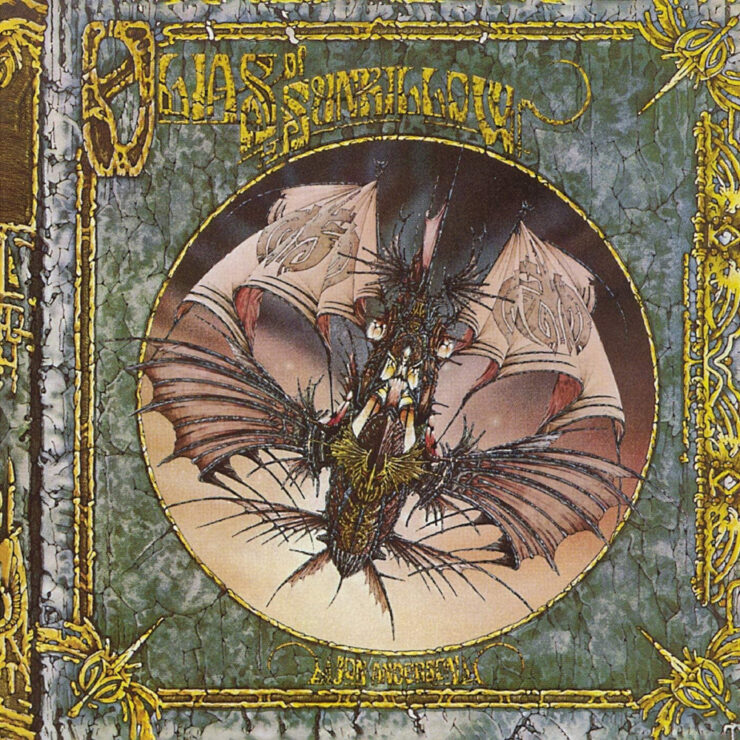 A look into the classic debut solo album by YES vocalist JON ANDERSON, Olias of Sunhillow, released in July 1976.

Looking back, it was the kind of career move that seems unthinkable today. At the height of Yes’s popularity, the five members of the pioneering prog collective decided to go their separate ways to record solo albums in 1975, after 4 successful years of touring and recording. None of the debuts made much of a mark or hit the lofty peaks of The Yes Album, Fragile, Close to the Edge, Tales From Topographic Oceans or Relayer. Yet each record showcased the musical diversity of Yes, revealing the talents and stylistic differences each member brought to the band.

Now, nearly 50 years on, Yes fans are getting a richly remastered reissue of what is arguably the best and most Yes-like of those solo efforts — Jon Anderson’s groundbreaking Olias of Sunhillow. Although a strong case can be made for Chris Squire’s Fish Out of Water as the pick of the litter, Anderson’s 1976 debut can be fairly described as perhaps the best Yes album Yes never made.

With the new CD/DVD-Audio rerelease of Olias — including a sparkling 5.1 surround-sound remix — the album is getting a (justified) new look and listen, and bringing inevitable comparisons to the other Yes solo and band efforts of the day.
Before delving into why Olias merits this renewed attention and reconsideration, it’s worth noting that Anderson’s solo work has been spotty, on the whole. Untethered from the Yes mothership, the elfin vocalist’s solo efforts range from not-half-bad to make-the-bad-man-stop, in the words of one critic.

He seems to shine best when collaborating with other musicians, who keep him grounded. His works with Vangelis in the 1970s and 1980 are prime examples. So are his more recent collaborations with Jean-Luc Ponty (2014’s Better Late Than Never) and Roine Stolt (2016’s Invention of Knowledge). But Olias is the lone exception. It is his most accomplished and complete work. It is consistently excellent from start to finish. And it stands as a stunning prog masterpiece that holds up well alongside the best of Yes and his bandmate’s solo efforts — for a several remarkable reasons:

• First of all, Olias is a true solo effort. Anderson composed every track, sings every note and plays every one of the 30 instruments you hear, many of which he learned to play from scratch. Listen closely and you can discern various keyboards, mellotron, harp, guitars, sitar, mandolin, percussion, flutes, bells and exotic instruments like the Turkish saz. The singer-songwriter even recorded the album largely by himself in his Buckinghamshire home studio.

• Secondly, the album breaks a ton of new ground musically, even by Yes standards. It blends world-beat music with experimental electronics, acoustic rock and oriental motifs. In places, it is symphonic in scope, melding spacey new-age atmospherics, psychedelia and even Buddhist-like chants (voiced in a word-less language Anderson invented for the project).

• Last (but hardly least), Olias features some of the most stirring and gorgeous melodies Anderson has ever produced, on his own or with other players.

Inspirations and Forerunners
Lyrically, the album is a song cycle inspired by Roger Dean’s iconic fantasy artwork from the classic 1971 Yes album Fragile. Dean’s post-apocalyptic imagery depicts a ship fleeing an Earth-like planet as it appears to break apart below. (The original elaborate gatefold sleeve designed by David Fairbrother-Roe for Olias is reproduced for the rerelease, which also includes a new essay and interview with Anderson.)

The song lyrics are dense and cryptic, but the story tells the tale of that Noah’s Ark-like ship and its inhabitants — the leaders of four tribes who flee their home planet (Sunhillow) after a volcanic eruption dooms it. The main characters are Olias, a magician who builds the ship, its pilot Ranyart and a mystic/politician Qoquaq who unites the four tribes to leave Sunhillow for parts unknown.

With me so far?

That’s really all you need to know about the story, which would make for a great CGI movie. (Paging James Cameron, whom Dean famously sued, unsuccessfully, after claiming the director appropriated the artist’s dream-like imagery for his 2009 film Avatar…but that’s another for another time). It’s fair to say, Anderson’s typically space-shot lyrics are more cosmic than ever on Olias. But, somehow, it suits the album’s overall concept.

Musically, Olias is an absolute tour-de-force that demands a close listen throughout. It is a pure delight, from the get-go, without an ounce of filler. It plays like a single piece of music, presented all-of-a-piece with few breaks between tracks. And the remaster — an upmix from the master tapes — reveals new color, texture and details that make it far superior to the muddy original vinyl release and two inferior-sounding CD reissues.

Olias draws from two prior Anderson recordings that offered a hint of things to come. “We Have Heaven,” his solo contribution to Fragile, sounds like a trial run for the stacked-vocal approach he would take on Olias. And his 1975 collaboration with Vangelis — the celestial “So Long Ago, So Clear”’ from Heaven and Hell — could have been an Olias outtake. In places, the album also echoes the free-form soundscapes Yes employed here and there on Close to the Edge, Tales and Relayer.

So, imagine an album that extrapolates from all of these individual parts and forerunners and you’ll have a sense of what Olias has to offer.

Track by Track: A Feast for the Ears
A Chinese gong introduces the album opener, “Ocean Song,” a spare harp-synth instrumental that sets the tone for everything that follows. After this 3-minute preamble, “Meeting (Garden of Geda)” kicks in, with Anderson’s multi-layered vocals creating a shimmering chorus of heavenly melodies.

The track builds in intensity — propelled by tribal drums, guitar, soaring synth lines and crashing cymbals — until giving way to “Sound Out the Galleon.” This lush tone poem in three-quarter time is one of the strongest tracks on the album. It’s an amazing showcase for Anderson’s faux-castrato soprano and his facility for melodic invention. It also features a scat-like break, voiced in words only Anderson understands, that echoes the ending coda of the Yes classic, “Siberian Khatru.”

An Eastern-influenced meditation follows — the Brian Eno-like “Dance of Ranyart.” It’s a largely unmetered instrumental with swirling harp flourishes and sing-song synth lines that sets up to the most rousing track on the album, “Olias (To Build the Moorglade).” The song opens with a snippet of Mini Moog bursts that sound like an electronic language R2-D2 might recognize. The intro leads to a drum-driven tribal romp, capped by richly layered harmonies. It is gorgeous, complex and stirring.

Next, is the epic three-part suite, “Qoquaq En Transic/Naon/Transic To” (your guess is as good as any, as to the title’s meaning). It opens and closes with a tempo-free interlude built around a wordless vocal melody Anderson layers over parallel synth lines. (Note for audiophiles: In earlier releases, it wasn’t entirely clear whether these lead lines were human or mechanical; this diamond-cut remaster reveals it is both).

Between the intro and outro of this musical triptych, a noisy drum break throws everything into the mix — thrashing rhythms, clashing bells and urgent contrapuntal vocal melodies — raising the volume and energy of the album to new heights.

As the piece recedes like a retreating storm, “Flight of the Moorglade” kicks in with lush acoustic guitar flourishes and shimmering synths that frame Anderson’s most upbeat vocal performance here. In just over three minutes, the track covers a dizzying range of styles, key changes and tempos. The closing section brings together three vocal lines that overlap like an M.C. Escher trompe l’oeil of sound. It is the one piece on Olias that would have fit neatly on any early Yes album.

Next up: “Solid Space,” a heady symphonic-rock powerhouse that perfectly sets up the second three-part suite on the album, “Moon Ra/Chords/Song of Search.” Taken together, these four pieces are the sprawling centerpiece of Olias, comprising nearly half of the 45-minute album and showcasing Anderson’s most ambitious songcraft, performance and vocal talents.

• “Moon Ra” gives Anderson a chance to show off his newly acquired keyboard skills, with ascendant Moog lines skittering over a vocal-and-guitar-driven rhythm section.
• “Chords” combines a churchy organ backing with a choirboy chorus, creating a moving mini-symphony that rivals the majestic “Soon” section of “The Gates of Delirium” from Relayer.
• “Song of Search” features a classical-guitar passage that pays homage to Bach’s Prelude No. 1 in C Major and a spacey outro that would been right at home on the soundtrack of Carl Sagan’s 1980 “Cosmos” TV series.

The album closer, “To The Runner,” is an Eastern-inspired epilogue that sparkles with grace and power as Anderson’s invites listeners to “look farther and farther beyond” and “cradle this sweet pleasure.” It’s a fitting track to end this extraordinary musical journey, with an upbeat message and a catchy melody that seems designed to play in the listener’s head and heart long after the track has ended.

Looking back, it’s a shame that Olias never received the attention it so richly deserved (although it briefly hit No. 8 in the U.K. and No. 47 in the U.S.). Perhaps that’s because Yes regrouped shortly after its release, with Rick Wakeman replacing short-timer Patrick Moraz to reform the classic Yes lineup with Anderson, Squire, Steve Howe and Alan White.
But this stunning remaster should bring Olias a fresh new look and listen, in the same way the other solo prog masterpiece of its day — Mike Oldfield’s Tubular Bells — is getting renewed attention.

One final note: In the liner notes of the album, Anderson reiterates his long-teased plans for a sequel to his first (and best) solo album — to be called The Songs of Zamran: Son of Olias. Whether, and when, we might see Zamran is unclear. But, for now, this extraordinary remastered CD/DVD-Audio edition of Olias is a must-have for Yes fans and prog devotees of all stripes.

Track Listing:
1. Ocean Song
2. Meeting (Garden of Geda)/Sound Out the Galleon
3. Dance of Ranyart/Olias (To Build the Moorglade)
4. Qoquag En Transic/Naon/Transic To
5. Flight of the Moorglade
6. Solid Space
7. Moon Ra/Chords/Song of Search
8. To the Runner