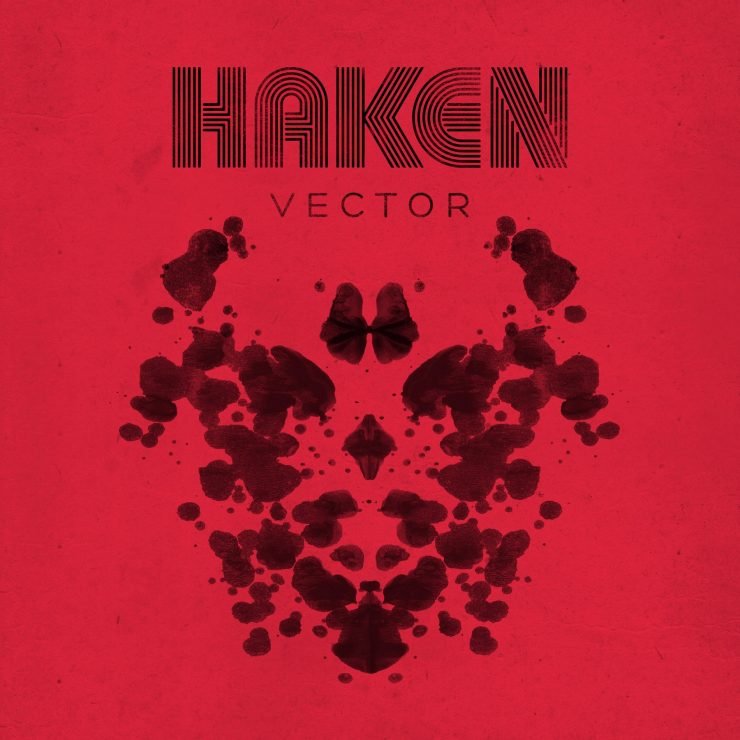 Review of the new Haken album ‘Vector’, out October 26th, 2018 on InsideOutMusic.

The Haken virus has infected thousands in Prog world, and it is easy to see why. Staggering live performances, mathematically precise instrumentation, impenetrably complex and challenging arrangements, a (more recent) willingness to embrace variation and, quite simply, unique raw prog metal power. The result has been a viral spreading of Haken’s popularity throughout the world.

I have at times been accused of being ‘on the fence’ about Haken. Always blown way by their performances and amazed by their technical prowess, I felt that a little less furious technicality and a little more feeling or emotion might bring them closer to perfection. Nevertheless, the extreme proficiency with which this band creates music has indeed made me a fan (especially from The Mountain onwards.) Where I have been somewhat mistaken is in presuming that traditional prog melody and Haken’s very specific brand of ‘technical crunch’ are mutually exclusive. The presumption has been that a melodic passage needs to stand alone or replace a ‘math-metal’ passage in any song in order to create balance. This album proves that theory wrong.

In the world of mathematics, the word ‘vector’ means ‘a quantity of direction, determining the position of one point in space relative to another’. In the world of medicine, it means ‘an organism, typically a biting insect or tick, that transmits a disease or parasite.’ In the world of psychology, ‘vector’ is a Gestalt theory that examines patterns of interaction between a mental patient and his environment. Which meaning did Haken intend to reference when using the name as a title for their new album? Let us psychoanalyze Vector.

“Clear” is a two-minute church organ intro that sounds like the soundtrack to a vampiric movie scene (taking place in the main hall of a mansion of horrors.) One is certainly left in anticipation.

Then “The Good Doctor” launches with a dervish keyboard riff that develops into a twisting, mental tornado such as a victim might experience when suffering an epileptic seizure. Keyboardist Diego Tejeida controls this whirlwind of musical psychosis with determined precision. This song is the first hint at the conceptual context – it seems that a catatonic patient is the victim of a psychotic doctor who is in the mood to play games with his mental state, resulting in flashbacks for the patient. This horrifying theme is the perfect context for Haken to do what they do best – and then some. The band is in a frenetic mood, and vocalist Ross Jennings is in melodic voice despite the heavy and contiguous rhythm that hammers under his vocal line. Clearly, the medical and psychological contexts of the word ‘vector’ are being employed, at least for now.

“Puzzle Box” is the first sign that we are to expect something different (yet at the same time mystifyingly familiar) from Haken. As the Good Doctor was intent on playing games with his patient, Haken, in a far more benign way, appear to be experimenting with their audience’s capacity to hear all that can be Haken, taken to the next level. It is eight minutes of seizure-like rhythms that defy any analysis, in which Ray Hearne reinforces his reputation as one of the monster technical drummers of our time. This is not to say that the insanity of the song does not profer melodic gratification. It does, through a combination of Jennings’ tonality, overlaid on to a shifting earthquake of instrumental madness, that will dessicate your perceptions of how complex Prog can become. Guitarists Rich Henshall and Charlie Griffiths provide the foundation of this puzzle, and the result will bamboozle you like a mental patient who has lost his medication, faced by an army of pounding alien drones.

Thought it could not get more emphatic than that? Well, hold on to your tranquilizers. “Veil,” at nearly thirteen minutes, is one of the most intriguing Prog songs I have heard in recent times. Immensely heavy and complex, I have never quite heard instrumental sounds as cranium-shattering as this. Expect a musical lobotomy. The band may or may not agree with the following comment, but I mean it as a high compliment: Dream Theater fans will be infected by this vector, which builds on DT’s most aggressive legacy. And there is nothing wrong with that. The song is filled with musical variation, from guitar riffs that will make you feel like you’ve just had brain surgery, to morphine-like passages of sinister false security, to grand vocal climaxes and lead solos (strangely absent on the rest of the album) that will cut you like a scalpel. “Save me, take away the pain inside and teach me…” pleads Jennings, while the guitars perform surgery on him. This song is unlike anything you have heard before, because Haken are in an angry mode of experimentation, and you are the patient. Imagine a million parasites attacking your innards, only with military precision, as if conducted by a mad epileptic alien genius with a laser scalpel for a baton. Terrifying.

By now mentally exhausted, the listener might be left wondering what, if anything, the band could now do to give you a respite from your lobotomy. Forget it. Things get even heavier and more complex, because the fifth song, “Nil By Mouth,” is a Haken instrumental. Call the nurse, because its complexity and aggression are almost unbearable. By now it is pretty obvious that there is a clear concept behind this album, and it is one of psychological and physiological invasion. “Nil By Mouth” exposes Haken’s astounding rhythmic virtuosity from all angles. Ray Hearne releases himself from his restraints and commands the band, who sound like a group of frothing aliens ready to decimate Planet Music with virtually impossible time signatures and changes. Conner Green, whose bass foundation in Haken is swiftly becoming legendary, requires special mention for his intricacy on this track. How the band keeps it all together is the stuff of scientific algorithms. I am really looking forward to seeing this monstrous arrangement delivered live.

“Host” starts with a jazzy trumpet intro that sounds almost Burlesque, before it becomes sinister, with Jennings’ smooth but foreboding vocal line. Gentle but menacing, this is the only respite from the thunderous convulsions of the rest of the album. It is a plea from the patient about his pending expiry: “Sail away, goodbye, I’ve been left out here to die, never mind, what’s near, there’s nothing left to fear.” He has been left to his demise, and his acceptance turns to feelings of abandonment. Can Haken employ emotion as well as anyone else in Prog? You bet they can.

The biological ‘vector’ theme is fully defined in seventh and final track, “A Cell Divides.” Jennings’ voice is brought especially to the fore in this one, which again features Haken’s new-found ability to extract both melodic and power-metal gratification simultaneously, without segmenting passages to explicitly suit either mood. ‘It’s the beauty in the cell, the grace of imperfection…’ Well, there is no imperfection in this closer, which is a fitting reflection of the mutation of the vector – a natural correction for the patient. It is filled with polyrhythms, pleading melodies, jaw-shattering guitars and bass and an excellent keyboard interlude that leads to the climax of the piece. The song ends the album on a mystifying off-beat that leaves the listener wondering as to the patient’s fate. Bewildering, impressive and satisfying, all at the same time.

There does not have to be a dichotomy between heaviness and melodic gratification. They can co-exist in the same verse, chorus or middle section, and on this album, possibly Haken’s heaviest, they do. The production of Vector is better than the epithets ‘punchy’ or ‘full’ can describe. You have to hear the fullness of the bottom end, the effects on the guitar and vocal lines, and the overall weight, to understand it. It is just massive. If Haken’s intention was to create a different sounding album to previous works, but without losing the Haken ‘flavor’ that fans have come to love, this album’s production reflects just that.

Filled with rhythmic paroxysms and pugnacious as ever, there is, this time, a little sugar coated onto the glove. This is Haken’s heaviest album. There, I said it. It is also their most melodic, but not in segments. Are there quiet melodic breaks? Some, but not many, and I am almost perplexed that I am able to state that. Somehow, Haken have struck an intangible and mysterious formula that makes their frantic math-rock expose its soul, its feel and its humanity. When some hard and heavy bands decide to embrace melody, it can be a fairly obvious shift (a case in point being Opeth.) While not quite as dramatic, this album presents a shift just as effective as that, yet it is done with a far less obvious formula. Haken are as heavy as they have ever been, as technical as they have ever been, as mathematical as they have ever been, and the tones of Ross Jennings’ voice and the other members’ instruments have changed very little. Yet somehow, a strange and infectious vector has now infected their music to create a melodic tonality, mixed with their technicality, that has not quite existed in their music before. (Perhaps this is a result of co-composing in person, rather than remotely – honestly I am not certain, but succeed, it does.)

In general, despite the heaviness of the instrumentation, Vector has a weirdly elusive melodic quality, and this is only partly because of Jennings’ vocals. Somehow Haken have given vent to their math-metal proclivities but nonetheless produced something that will actually have you humming along, at least in parts. It is not a straightforward case of melodic passages added to the songs. It is a new recipe – something different and complex. This, dear reader, is some weird, infectious chemistry that cannot be categorized in simple terms. Gird your loins, go and listen, and expect to hear both the expected and the unexpected. You are Haken’s host and their newly-created vector organism, which defies diagnosis, will bite you hard. You will be infected, and you might just need psychoanalysis after your first listen.