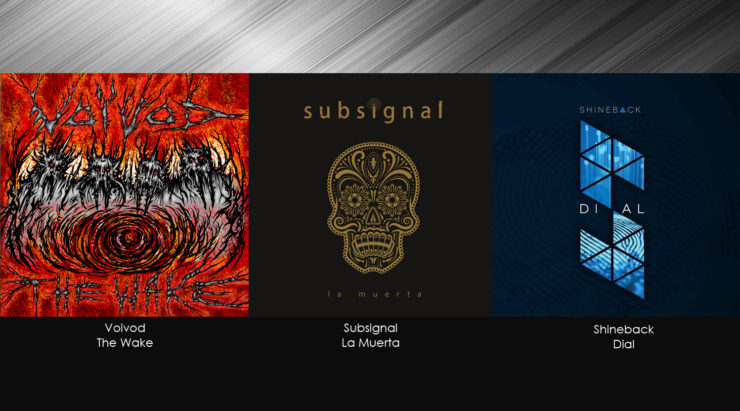 A look at recent releases from Voivod, Subsignal, and Shineback.

The thrash/prog metal pioneers make a triumphant return with their best collection of new music in years.  The Wake finds the band at their most progressive, with tons of guitar solos, creative time signatures, mad transitions, and unique instrumentation.  The first single “Obsolete Beings” opens the album with total abandon while the epic “Sonic Mycelium” summarizes the album is true prog form.  Fans of the band will love this return to glory and for fans that have never heard the group, this is a perfect introduction.

Somehow we missed reviewing this album released back in May. So we feel it important to mention Subsignal’s 6th album La Muerta, a brilliantly melodic mix of 80s AOR-style rock and modern prog.  The pristine production sets the backdrop for a compelling collection of songs with vocal harmonies, arena-sized choruses and chunky guitars.  There is just the right mix of double bass metal,  dynamic synths, and acoustic guitars to make this one of the standout albums of the year.  Tracks like “Every Able Hand” and “The Passage” recall early era Styx, while “As Birds on Pinions Free” could easily be mistaken for 80s-era Rush.

Simon Godfrey’s band Shineback returns with Dial,  again finding the band incorporating elements of rock, pop and EDM in a heady fusion of styles. Unlike previous albums, there is no central story that links the songs, but there is a theme of communication, as the press release for the band describes. Lead single “Consider Her Ways” is not unlike the music you might here on a Frost* record (the band spearheaded by his brother Jem). There is also the epic “My New Reward” a 26 minute mind-melting prog journey.