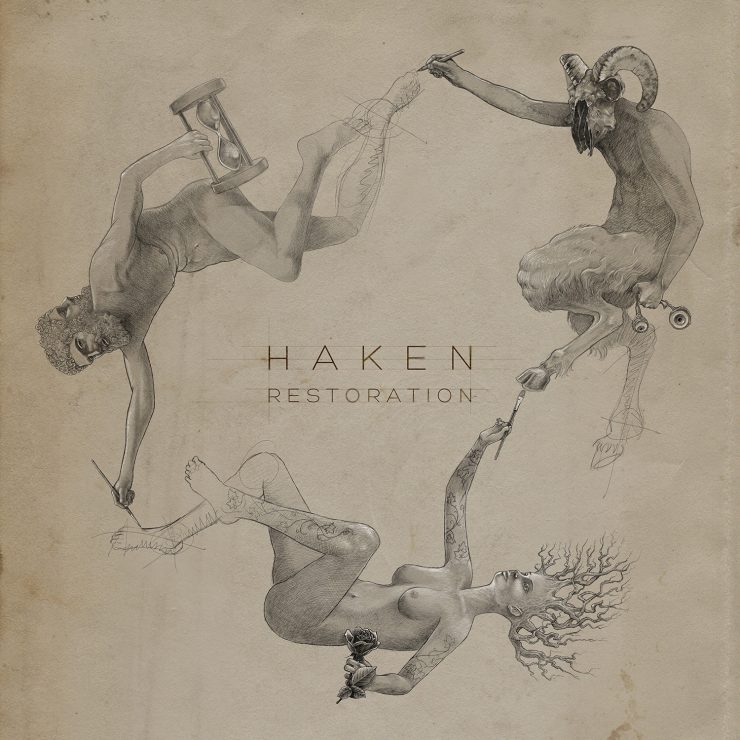 Review of the new Haken EP “Restoration” out Oct 27th, 2014 on Inside Out Music

Haken made a huge leap with their last album, 2013’s The Mountain.  It was an album that caught everyone by surprise and helped elevate the band from an up and coming band to one of the leaders in the genre moving forward.  So in a smart move to capitalize on the momentum built over the last year, the band have released the EP,” Restoration”, a collection of early demos the band have reworked into brand new songs and the first set of recordings with new bassist Connor Green.  The result is an amazingly impressive CD containing 3 of the best songs the band has done to date.  The is a band that is showing their confidence in their sound and making a statement that they are next generation of Prog.  There is definitely a Dream Theater influence in this music, but they find away to pay homage to their heroes and create their own style at the same time.  In fact the release of this EP is similar to when Dream Theater released “A Change of Seasons.”  That showed a band that understood what their fan base wanted and here Haken have seemingly made the same connection.

The opening track “Darkest Light” immediately grabs you with a grinding Pantera style guitar riff before diving right into vocalist Ross Jennings soaring vocal line.  This is an aggressive song throughout.  Some sections are as heavy as Dream Theater have ever been and the chorus is undeniably Haken.  The band has developed their own style for verse and chorus melodies that lie right in the middle between dark and uplifting.  Guitarists Richard Henshall and Charlie Griffiths just shred throughout the song while drummer Raymond Hearne is on target with every double bass beat.  Keyboardist Diego Tejeida drives a lot of this song from the first note.  The middle of this song is all over the place with notes and beats all doing their own thing in an amazing display of intentional chaos.  Yet there is a memorable chorus here that the band return to.

The middle track “Earthlings” is a more mellow track following in the style of “Somebody” from their last album.  This song has a beautiful melody in the chorus and really features Jennings who has helped define the sound of this band where some singers might find it hard to find their place in all of this music.  The second half of the song gets darker as the vocal harmonies of repetitive words begin to build to a crescendo.  It’s a wonderful song that is every bit as glorious as the two heavier standout tracks on this EP.

Where the first two tracks are immediate catalog highlights, the final track, “Crystallized” might be the best song the band has ever written.  It is right up there with “Visions.”  Clocking in at around 19 minutes, the song is everything that Haken is at its best, manic, melodic, creative, instrumentally insane.  The song begins in epic fashion and immediately goes into a fast, jazzy verse as if there is no time to waste.  The chorus appears early and in grand fashion and you know it will be back to wrap things up.  The anticipation of what we will experience along the way to that point make this a fun ride.  There are too many twists and turns to mention, everything from vocal and musical fireworks to multiple time signatures, orchestral sections and more.  The middle instrumental section is truly something to behold.  You want to applaud when it is done and then immediately clear your schedule for another 20 minutes.

Many of the great albums from the 70’s are only 3 songs and somehow this is considered an EP.  We should all be so lucky to get more 3 song EPs this good.  This can only make you wonder what this band has lined up for album number 4.  They have set the bar extremely high.

Released on October 27th on Inside Out Music