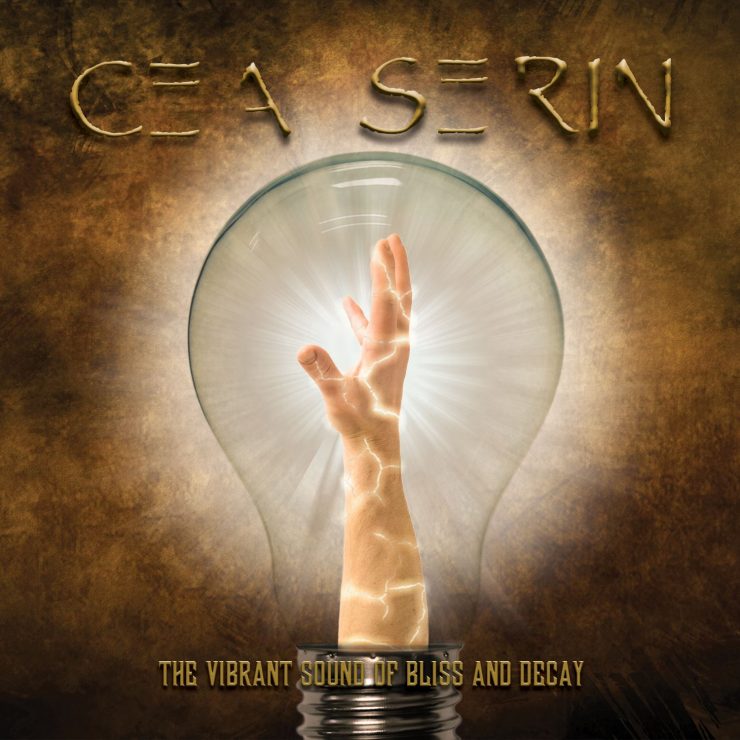 Cea Serin are a progressive metal band which was formed in 1997 by multi-intrumentalist Jay Lamm. Lamm (bass, vocals, and keyboards), along with Keith Warman on guitars and Rory Faciane on drums.  Their latest album, “The Vibrant Sound of Bliss and Decay,”  is the band’s first release since their 2005 album “Where Memories Combine”.

The band is self-described as having a “focus on song writing, lyrics, presentation, and a trademark mind-set.”  With a set of influences that includes artists such as Carcass, Megadeth, Dream Theater, At The Gates, and Yanni, Cea Serin offer a sound that has come to be known as ‘mercurial metal’.  After listening to their album, one can definitely hear these influences as Cea Searin show off both their compositions and their chops.

The album starts out with “Holy Mother”–a fast and tight opening riff between drums, guitar, and bass. The growling vocals are backed by a powerful double kick pounding while Lamm’s vocals soar during the chorus. Then you are taken into the instrumental/soloing section with changing rhythm and riffs which keep you listening.   Next up, “Illumination Mask”–a spacial cinematic intro is quickly interrupted by a thrash rhythm riffing assault. Lamm is able to again blend screeching vocals with melodic singing. The song leads into a demanding instrumental section with tasteful shredding soloing and pounding speed metal riffs.

With their next song, Cea Serin perform a cover of Sarah McLachlan’s “Ice”–the piano intro is followed by an acoustic groove in which vocals remind the listener of smooth masterpieces performed by Ray Alder or Geoff Tate. This well done cover allows the listener to relax the ears before “The Victim Cult” opens with a riff which can be described as a morphing of Queensryche and the aforementioned At The Gates. The middle of this song contains a heavy prog rhythm with a cool piano part–all leading to another great solo segment.

The song winds down to the epic composition of the album–the 20 minute song “What Falls Away”–this has a haunting piano intro which is then joined by strings. The drums and bass establish a groove in which Lamm shows of his fretless bass playing. Then the listener is taken on a journey between this groove and the heavy riffs you have now become accustomed to hearing. Once again, great guitar and keyboard soloing along with technical rhythm quickly remind you of the great influences in which this band have been inspired. Then it all winds down and fades into the familiar haunting piano which started the journey.

The overall mix and production of the album is very clean and powerful. There is a healthy balance between death metal style vocals and powerful upper register singing with great harmonies. Cea Searin’s musicianship is well displayed not only in their skill of playing, but in their ability to compose tasteful melodies, chord progressions, and solos.  If you are a fan of the same groups that influenced Cea Serin, you will not be disappointed.  This is Progressive Metal performed at the highest level bringing great songs along with aggressiveness that takes hold of the listener and doesn’t let go until the final second.