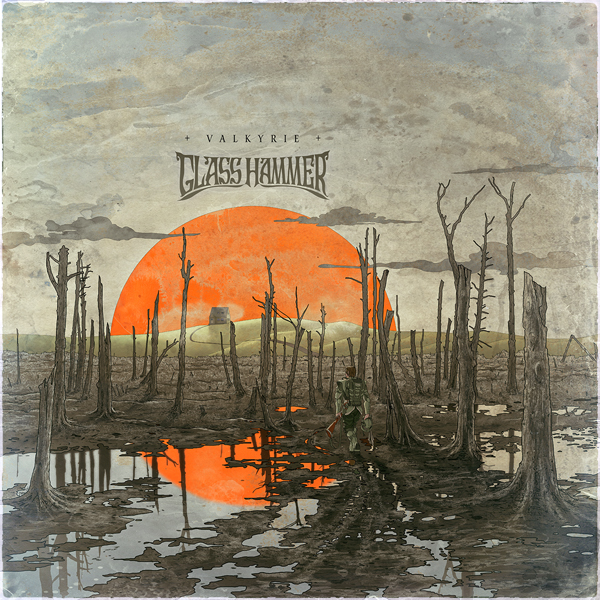 Few bands are able to claim they are releasing their 16th studio album.  Glass Hammer, one of the longest running American Prog bands are one such band.  Having weathered a few lineup changes and the essential departure of lead singer Jon Davison (now with Yes) a few albums ago, the group have overcome the odds and now released one of their best albums, if not the best, with Valkyrie.  Glass Hammer albums are largely symphonic-Prog, conceptual efforts, and this latest album is no different, telling the story of “a soldier’s struggle to return home from the horrors of war, to the girl who loves him and must ultimately find her way to him.”

With Davison on lead vocals, due to his similar voice and singing style to Jon Anderson, Glass Hammer always sounded mostly like Yes.  Not a bad criticism at all, as they did so well and with their own unique take.  However, with Davison gone and Susie Bogdanowicz and Steve Babb now handling the lead vocal duties, the band’s style has evolved, even more so since last year’s ‘The Breaking of the World.’  The band sound now more like a mix of all classic symphonic Prog groups of the 70s with a modern production sound. There are hints of Jethro Tull, Genesis, ELP, Renaissance and others thrown in and put through a Glass Hammer prism, making for a truly enjoyable listen.  The band are not trying to go Prog metal, or ride any new trends. They know what they are and they do it as good as anybody.

The album kicks off with the wonderful throwback “The Fields We Know” which finds Steve Babb singing most of the track, his Chris Squire-esque bass style right up front as well.  The middle break presents exquisite keyboard synth melodies not unlike Tony Bank during The Lamb period.  Meanwhile, the guitar/keyboard exchange, a la vintage Asia, is fist-pumping excellence. The second track, picks up where the first song ends, almost seamlessly, on this time with Susie taking control.

The third track “No Man’s Land” is also the longest track after over 14 minutes weaving through various motifs, introducing new instrumentation into the proceedings and offering all the necessary Prog moments.  Fred Schendel’s organs are featured throughout, especially in the epic ending where the song builds to the ultimate climax.

The title track, is an epic ballad that is masterfully written, while the heavy rocker “Fog of War” is about as intense a track the band have produced.  The band really pull off an immaculate Genesis sounds here, even down to Alan Shikoh’s guitars which harken back to Steve Hackett’s classic sound.  All throughout it Steve Babb’s bass which really acts as a lead instrument here driving the track.

There is a lot to like on this album.  Fans of old-school Prog looking for something new, look no further.  This might be the album you have been waiting for this year.

Key Tracks: The Fields We Know, No Man’s Land, Valkyrie