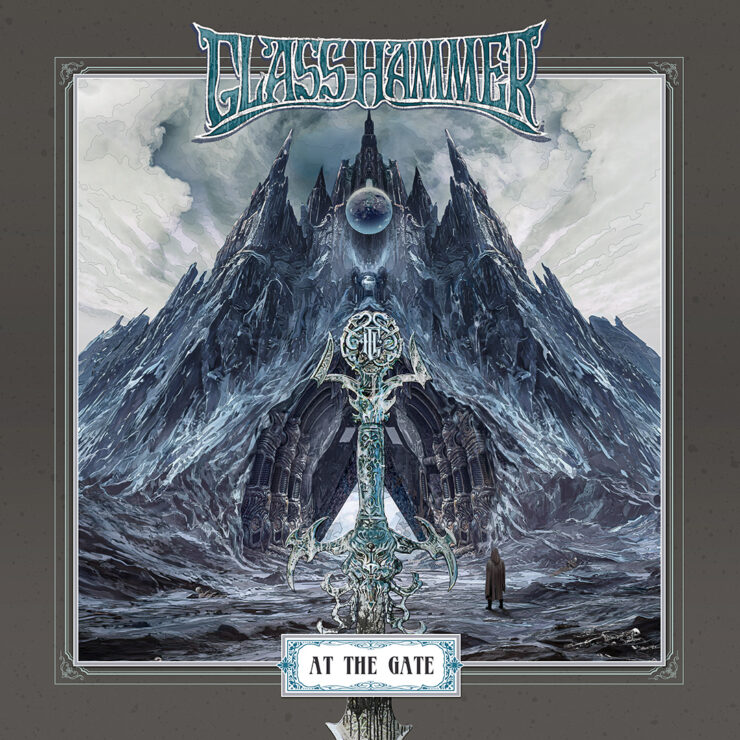 Review of the new Glass Hammer album ‘At The Gate’

There is a fine legacy of female vocalists in Progressive Rock. From Annie Haslam to Christina Booth, from Floor Jansen to Lee Douglas, these women have all proudly flown the Prog flag in the magical, mystical upper voice registers. Glass Hammer’s vocalist Hannah Pryor is destined to be counted amongst them.

Re-tooled in 2021 around Pryor’s vocal talents, this iteration of Glass Hammer has returned with its 21st studio album ‘At the Gate.’ The album is the third in the band’s ‘Skallagrim’ trilogy (a Progressive Rock fantasy based on bandleader Steve Babb’s novel ‘Skallagrim – In the Vales of Pagarna’.) You might at this point be wondering whether these fantastical notions do not come across as a little pretentious, but in fact they do not. This is Prog, after all, and a little pomposity and fantasy are downright requirements in the genre we love, just as long as they are presented with good taste and musicality. This album offers those qualities in droves. It is also an allegorical work, and its messages are quite apposite in the modern age.

It would be redundant to give a track-by-track account of ‘At the Gate’, which is a 56-minute opus that presents the final chapter of Babb’s Tolkein-esque story. It is an intricate tale about a thousand-year old man who has been searching for his lost love in the cursed land of Andorath for centuries. I will let the album do the storytelling itself, suffice it to state that the songs complete the fable and bring it to a detailed conclusion from the protagonist’s perspective, all the while providing great musical gratification.

The album is at times (perhaps surprisingly to some) quite metallic and heavy, and at other points innocently melodic, but at all times it delivers to an extremely high standard, both compositionally and sonically. It feels as if the music was largely written on guitar. Lyrically, the characters, magicians, screaming broadswords, mountains and myths are ever-present, but they are delivered in a fashion that is uniquely modern and contemporary.

Pryor is a real powerhouse. Her superb vocals are accompanied by Babb’s top-drawer bass-playing, the intricate multi-instrumentals of keyboardist Fred Schendel, and the ever-reliable patterns of highly respected drummer Aaron Raulston. Guest appearances are made by singers Jon Davison and John Beagley, as well as guitarist Reese Boyd. (Davison was, of course, Glass Hammer’s previous lead vocalist.)

Babb’s bass guitar sound is poignantly reminiscent of Chris Squire’s, and his and Schendel’s general production skills certainly impress beyond the norm. The sonic positioning of the album is consistent with Glass Hammer’s recent forays into an edgier, more modern (perhaps Rush-oriented) direction. But this is not to say that the band’s classic 1970’s Prog influences are ignored. Far from it – there are church organs and keyboard soundscapes aplenty, a generally cinematic approach to the songs and lofty, sweeping vocals that would not be out of place in the decades well before Pryor was born. With song titles like ‘Savage’, ‘North of North’, ‘Snowblind Girl’ and ‘Standing at the Gate (of Zagzagel)’, the scene is well set.

As the album unfolds, there are obvious moments of tribute that are intentionally reminiscent of various classic bands such as Queen, Led Zeppelin, Emerson Lake and Palmer, Yes, Kings X, Rush, Renaissance and others, but the production remains consistently modern, and there is a contemporary layer of sinister ‘edge’ that permeates, especially in the heavier tracks. The melodic songs are largely driven by Schendel’s highly tasteful keyboard orchestration and Pryor’s more melancholic tones. ‘In the Shadows’ is a perfect example of this, and Pryor and Schendel shine on this track. The album closes with the welcome upliftment of ‘It’s Love’, an optimistic and triumphant symphony of sound. And so the fable ends in the best possible fashion. It is all quite majestic.

The digi-pak edition of the album comes complete with excerpts from Babb’s fantasy novel and some excellent artwork. All in all this is a highly impressive release from fiercely independent artists.

Cinematic, melodic and symphonic on the one hand, and hard, heavy and even discordant on the other, ‘At The Gate’ is a beautifully balanced product. On each spin it increasingly reveals itself to be a worthy album that entrenches the Prog credentials of its members. Riff-driven but expansive, modern but classic, independent but highly professional, this release is most impressive. Particular praise must be given to Pryor, who does not come from a Progressive Rock background, but you would never have known it. Well-supported by her veteran band-mates, she has quickly become a vocalist to be reckoned with on the Progressive Rock landscape. I, for one, am greatly looking forward to seeing this line-up perform these songs live.

Glass Hammer’s ‘At the Gate is excellent symphonic Prog that straddles all the extremities of the genre, streamlined with 21st century sophistication. It succeeds admirably – magical stuff.