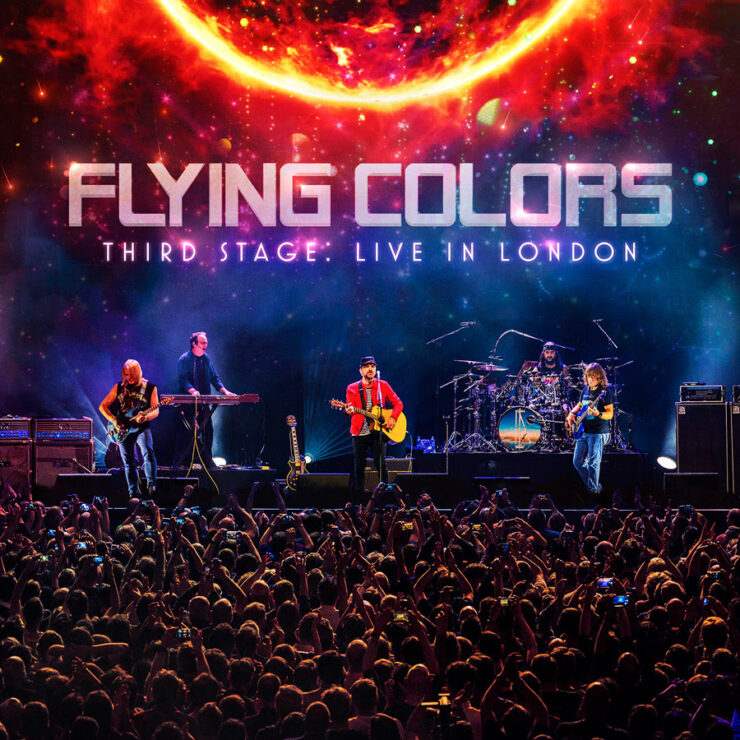 With a dearth of live shows on account of pandemic lockdown, (which did in fact curtail the final planned show of the Flying Colors Third Degree tour ) it is great to finally hear this live set! (I say finally, because I had a ticket for this actual show but some family circumstances arose which meant I could not attend… so personally I’m delighted that this has been released!)

I’m assuming if you’re reading this review on this website you don’t need a rundown of the history and the band members of this supergroup. The third studio album, Third Degree, continued the upward trajectory of this band and the expectation (met and exceeded, may I add) was for a high quality live release, particularly given this is a band for whom long world tours aren’t really possible.

With three studio albums to their name, the set kicks off with a one-two from those: “Blue Ocean”’s build makes it the perfect show opener for this collective and “Place In Your World” sets out the vocal and instrumental signature styles, within the context of a great pop tune with proggy embellishment. We then hit a run of Third Degree tracks (“The Loss Inside”,”More”, “Geronimo”, “You Are Not Alone” and “Love Letter”) punctuated by some “old favorites” (singalong “Kayla” and the funky “Forever In A Daze”). For a band who have played relatively few live shows together, and on a tour which had longer gaps and “interruptions” due to other commitments, the standard of playing and interaction is phenomenal. The “Front Row” centers around Casey McPherson – for many the “unknown quantity” in the band initially, he commands and collaborates up-front, while not diverting the spotlight from the others. From the intensity of More to the fragility of “Peaceful Harbor”, Casey covers all of the bases in a quite unassuming way, and he’s a key element in the unique vocal blend this band has with Morse/Portnoy. As you might expect, Steve Morse shines as one of the premier guitar players in prog, from the shimmering harmonics of “You Are Not Alone”, to the driving crunch of “The Loss Inside”. Rounded off by bassist Dave LaRue, whose focus and precision propel the funk in Geronimo and Forever In A Daze, these exciting players hold the audience in their palms!

And what can be said about Mike Portnoy and Neal Morse that hasn’t been said before. FC is one of their four joint bands, and the interplay from the risers is brilliantly captured in the video elements. The nods, glances and smiles, added to the sheer excellence on display is very endearing… and that doesn’t even touch on how their intricate musicality is tasteful and complementary to the whole band, rather than a solo show! The power pop and vocal arrangement of “Love Letter” brought a smile to my face, as it’s clear it did to theirs. I’m assuming most readers will know these songs from the respective albums but I should single out the live version of “Crawl” from this release. On the Third Degree album this track was a bit of a slow burner… a darker song with some true prog twists and turns, it didn’t immediately click with me. As my familiarity with it grew, it made more sense! Seeing this played out live, both in London, and also in the Blu-ray/earbook bonus performance from Morsefest 2019, it’s an absolute FC tour de force and one of the moments where you see all of the diverse elements of this band at their finest. The off-set of McPherson and Neal Morse’s vocal styles, the razor sharp Steve Morse interludes, Portnoy’s oscillating dynamics and LaRue’s essential underpinning coalesce to give this epic something really special… and the same can be said of many of the tracks presented here!

Closing out with a killer sequence of tracks from the first two albums (seriously what band has a repertoire can match the closing run of “Infinite Fire”, “Cosmic Symphony”, “The Storm” and “Mask Machine”???) it’s a well structured set. I have to admit when I saw set lists circulating I was a bit disappointed that “Cadence” and (my favorite from Third Degree) “Last Train Home” were absent – but listening to/ watching this I cannot fault what is on offer.

A word about the video content. Filmed at the beautiful Shepherd’s Bush Empire, the ornate setting and relatively small capacity makes this a really immersive experience. My first watch had many “I feel like I’m there” moments, even when I could see the very seat I’d hoped to be viewing the show from had I been able to attend – it’s an excellently filmed / edited watch. Blending the backdrop visuals with live footage seems to be a divisive area when it comes to live prog videos for many bands. In some other releases I have found this distracting at times, but here I think they are complementary.

The format to go for here appears to be either the Blu-ray or the earbook because of the inclusion of: bonus live tracks filmed at the first show in the tour at Morsefest 2019, focusing on those tracks which were enhanced by strings and backing vocalists at that show (almost an hour of pro shot footage which leaves one feeling it would be great to see this show in its entirety) and; four music videos including the day-glo antics of More and, arguably one of the best prog promos ever, the animated Fab Flying Colored Submarine-esque “Love Letter”.

Music Videos:
More
You Are Not Alone
Love Letter
The Loss Inside