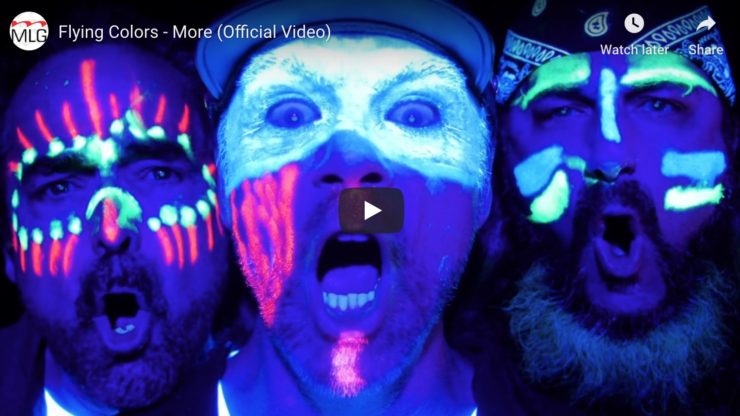 The brand new first single and video for “More” from Flying Colors (Steve Morse, Mike Portnoy, Neal Morse, Dave LaRue and Casey McPherson) has been released today and you can see it here! Third Degree, their third studio album is set for release on October 4, 2019 via Music Theories Recordings / Mascot Label Group.

From the skittery psychedelic/classical turnaround of the lead single “More” to the Beach Boys-meet-Asia vibe of “Love Letter” to the deep emotionality of the album-ending, prog-leaning epic “Crawl,” the nine tracks that comprise  Third Degree signify just how much Flying Colors are willing to explore new frontiers. 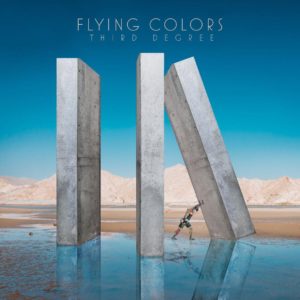 Third Degree continues to build upon the deep-rooted musical connection the members of Flying Colors established on their first two boundary-stretching albums. “There’s a real special chemistry between the five of us,” Portnoy confirms. “We keep getting better and better as we get more comfortable and more familiar with each other, and the music itself keeps getting more and more mature.” Adds Steve Morse, “This one, dare I say it, explores new ground for the band. One of my favorites, ‘Geronimo,’ has an upbeat, jazzy, heavy, melodic feel all at once. We just do what makes us smile and sounds good, instead of wondering how critics or program directors will like it. It makes for the best music!”

Casey McPherson concurs with his fellow bandmates by noting, “What Third Degree really proves to me is that we have our own sound. There are no egos in this band, and we all want the best parts to come out, which is such a joy for me to participate in. I think that really allows people’s uniqueness to show through.” In other words, when five individual musical elements become one, good things inevitably happen. Clarifies Portnoy, “When prog guys like Neal and me join instrumental guys like Steve and Dave, with Casey being the glue in the middle, we’re able to write music that is not only incredibly musical, but also incredibly accessible and melodic.”

That said, Third Degree did not come effortlessly, nor too quickly. “It took time — but that’s the thing with Flying Colors,” Portnoy admits. “It’s very hard to get the five of us in the same room at the same time. But once we do, it flows so easily.” The first sessions for Third Degree took place at Steve Morse’s studio in Florida in December 2016, wherein seven songs were written. From there, the bandmembers had to scatter back to their other personal and professional obligations, eventually reconvening two full years later in December 2018, when three more tracks were added to the overall Third Degree mix. (The tenth track, “Waiting for the Sun,” will be made available in forthcoming special editions.)

At this point, Portnoy deployed to Neal Morse’s Nashville studio to cut his drum tracks, while Neal and Casey often got together on Skype, as they’ve done in the past, to hone the lyrics. “Casey and Neal bring incredible levels of humanity and emotion to the lyrics,” admires Portnoy. For his part, McPherson marvels at Neal’s harmonic talents: “That’s really Neal’s brilliance — his ability to stylistically approach harmonies in so many different ways. It just blows my mind every time. It’s like Christmas for me whenever I get Neal’s harmony tracks!” Not only that, but the three-part harmonies between Casey, Neal, and Mike — a hallmark of many a Flying Colors track — again shine through on Third Degree. “It’s an important element of what we do,” agrees Portnoy. “Casey is usually the lead vocalist with Neal and me behind him, though we sometimes switch it up. Either way, the three-part vocals are definitely a key part of the Flying Colors sound.”

As a songwriter, McPherson is never afraid to confront his feelings head-on, whether it’s the nostalgic bent of “Last Train Home” or the raw, relatable universality of “You Are Not Alone.” In short, Third Degree is a very human record to its core. “For me, music is a platform to sort through the things I’m going through, and it gives the listener the opportunity to do that too,” McPherson believes. “I try to be acutely honest, metaphorically, so that other people can find their own story in our songs — like I hope they will with ‘Crawl.’ Sometimes, we have to be reminded that life is about the overall ebb and flow.” Portnoy agrees that “Crawl” is his personal favorite track on the album. “The minute we finished writing it, I knew it was the album closer, hands down. I knew it right there and then,” he emphatically reports. “It’s the one new song of ours I most look forward to playing live.”

To that end, Flying Colors have booked nine live dates on their calendar, mostly split evenly between the U.S. and Europe — in essence, to perform as many shows for their fans as they can possibly fit in between their many other band and touring commitments. “There’s an evolution happening within our sound on this record, and I’m excited to explore that onstage,” McPherson notes. “We’ve seen that evolution start with this record, and we’re going to see it happen even more so on the fourth record, in terms of capturing all our beautiful differences.”

Another progression has been the band’s use of technology to provide industry-leading sound. Third Degree was engineered with the award-winning Harmonic Phrase Analysis and Restoration (HPAR) technology. Developed by the band’s resident mad scientist, Bill Evans (also rumored to have approached the fantastic five about forming the band), he created HPAR based on the group’s performance styles — resulting in unprecedented fidelity. Flying Colors regular producer Rich Mouser (The Neal Morse Band, Transatlantic) then crafted a sumptuous mix in his inimitable style.

Portnoy agrees the future of Flying Colors looks quite bright indeed. “Our mission statement when we came together is still the same now,” he affirms. “It’s the same five guys with extremely different musical personalities and backgrounds coming together into a giant melting pot where it all comes out on the other end with music that’s accessible, melodic, deep, and colorful. That’s always been the goal of this band, and so far, I think we’re three for three.”
With Third Degree, Flying Colors continue to fire on all cylinders — and, in the process, they also handily prove the third time’s an unquestionable sonic charm.