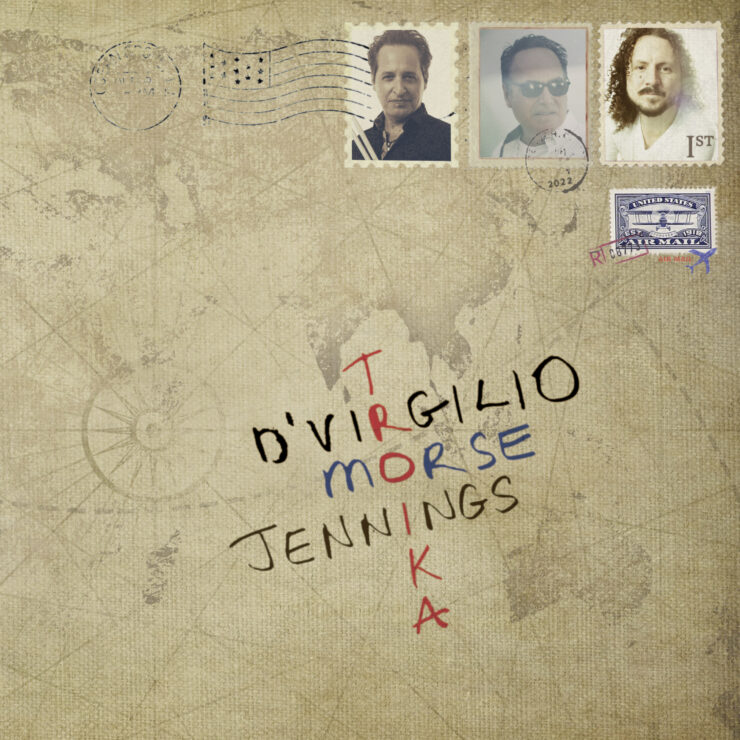 The new supergroup trio D’Virgilio, Morse & Jennings may sound more like a law firm than a rock outfit, but these guys are well known to the prog faithful as three of the most distinctive voices in the game. Comprised of Haken vocalist Ross Jennings and ex-Spock’s Beard bandmates Nick D’Virgilio and Neal Morse, the trio brings a healthy dose of melodic-prog cred to their debut album Troika, which was recorded remotely during the pandemic lockdown. But what’s so fresh and surprising about this effort is the way these guys purposefully – and credibly — channel the singer-songwriter ethos of the early 1970s.

All but two of the 11 tracks on Troika are acoustic-guitar-driven pieces in the 3- to 6-minute range, featuring stacked three-part harmonies as strong and sweet as honey-finished bourbon. Had Crosby, Stills and Nash come of age 40 years later — and replaced their hippie wisdoms with a dollop of prog sensibility – they might sound something like this. Which is to say: Fans of CSN, James Taylor, Bread and the lush harmonies of the Beatles, Yes and Todd Rundgren will find much to like here.

Progheads be warned: You won’t find any lengthy instrumental sections or solos here. No over-the-top symphonic arrangements. Not even a single complex time signature. But the depth and richness of the vocal melodies make this a sunny antidote for these dark and difficult times, with COVID still wreaking havoc on the music industry.

The album opens with “Everything I Am,” a sprightly love song that introduces and showcases the perfectly matched mix of Jennings’ pure falsetto, D’Virgilio’s boyish mid-range tenor and Morse’s edgy lower-register vocals. The seven tracks that follow stick to a similar template – lush harmonies layered over acoustic guitars backed by utilitarian bass, drums, keys and electric-guitar lines. But the arrangements and vocal effects are inventive and fresh enough, song to song, that the album never falls into a predictable rut. For instance, “Julia,” originally a Jennings tune about a troubled father-daughter relationship, is a multi-part suite that clocks in at just over 6 minutes and has all the makings of a prog epic distilled to its melodic essence. You can hear the original 8-minute version on the special edition, which shows how the song was before Neal Morse added the brilliant chorus.

“You Set My Soul on Fire,” “If I Could” and “A Change is Gonna Come” feature surprising twists and turns that go beyond the simple verse-chorus-bridge progressions and three-chord formulas that drive most conventional folk songs. “One Time Less” is the closest thing to a country song on the album – a kicky romp that would fit right in on a Nashville radio’s playlist. “If I Could” tears a page from Paul Simon’s Graceland, pulling in African and world-beat flourishes. And “Another Trip Around the Sun” includes a five-part choral fugue that is spine-tinglingly good. Fans of Gentle Giant, take note.

Even the two heavier prog-rockers here – the Rundgren-like “King for a Day” and “Second Hand Sons” – are built around the three-part harmonies and 12- and 6-string fretwork that set Troika apart. Morse says the album was inspired by a desire to produce a simpler album built around strong vocal melodies and reached out to D’Virgilio and Jennings to complete the trio. All three contributed songs to Troika and they take turns on lead vocals, which gives the album an added depth and dimension.

Troika might seem like a surprising departure for these guys. But none is really a stranger to acoustic music. In addition to his drum work with Big Big Train, D’Virgilio has had a long-running side project – UniKuE – featuring an all-ukulele band that reworks prog classics like Yes’s “Roundabout” and King Crimson’s “Frame by Frame.” Morse released a mostly country-folk record, Life and Times, in 2018. And Jennings, while best known as the powerful vocalist for Haken, issued a solo recording late last year, A Shadow of My Future Self, featuring several largely acoustic tracks.

Also worth noting: Spock’s Beard frequently included quieter acoustic guitar-and-vocal tracks in between the prog-rock epics that are the band’s calling card, such as “June,” from 1998’s The Kindness of Strangers. In a recent interview, Morse explains that the unplugged sides of Spock’s Beard’s music were conceived as a musical palate cleanser between the band’s heavier, more complex pieces. “I thought it would be nice to have something to give people’s ears a rest between the epics,” he says.

D’Virgilio adds that Troika harkens back to those earlier days, when Spock’s Beard was just finding its footing. “Back in the old days of Spock’s Beard we used to get done with concerts, get back on the tour bus, and sing CSN songs (there were some Beatles tunes thrown in there, too) until the sun came up!” he says. “I always had a great time harmonizing with Neal, so I was totally into the idea of the project. Bringing Ross on board was the perfect match: I like how Ross sings very much and he is a super talented guy. Once I heard the demos he sent in for the project, I knew right away we would have something special.”

Troika is that rare and special side project that has the makings of something more than simply a one-off between tours and recordings for these three prog powerhouses. Let’s hope these guys regroup for a follow-up album and perhaps a live recording of these tracks. Is it too much to hope that a future prog festival – featuring the Neal Morse Band tour, Big Big Train and Haken – might allow for the trio to sit down for an acoustic set, featuring these songs?
We’ll have to see…

Released on Feb 25th, 2022 on InsideOutMusic