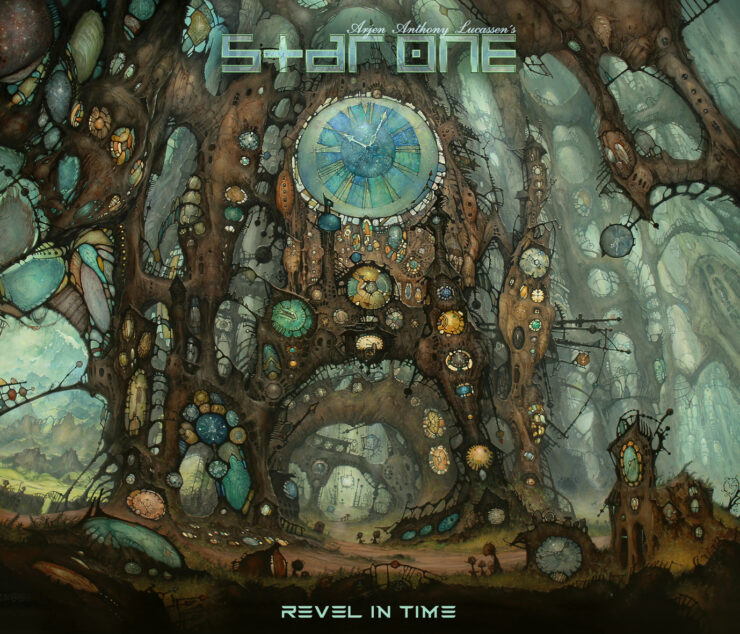 Review of the new Star One album – Revel In Time, out on Feb 18th, 2022 on InsideOutMusic.

Next to the likes of Neal Morse and Mike Portnoy, Arjen Anthony Lucassen might just be the most productive musician in prog music scene. Besides the 10 studio albums he’s released under the Ayreon banner, he’s also been involved in numerous side projects including Guilt Machine, The Gentle Storm, Stream of Passion, and of course, the metal-oriented Star One. Given how busy Lucassen has been, you’d think the man would take a break from recording new music, but rest does not seem to be an option for him. So it is that we’re receiving Revel in Time from his Star One project on February 18, 2022, a whole 12 years after the release of their previous barn stomper.

Despite the amount of time that has passed since 2010’s Victims of the Modern Age, Lucassen and company jump right into the new record as though no time has passed at all. The songs are still dominated by Lucassen’s dynamic riffs, the vocals are just as powerful as ever, and like previous Star One albums, Revel in Time follows a loose concept inspired by science fiction (this time around, it’s movies that deal with the manipulation of time). Unlike the previous two albums, however, Lucassen has done away with the combination of Russell Allen, Damian Wilson, Dan Swanö, and Floor Jansen singing on every track. Instead, we get a whole slew of guest vocalists to take lead on each song. It’s a drastic measure, but one that allows Lucassen to play around with the nuances of the compositions given the unique qualities each guest singer brings to their respective track. This, along with the choice to bring in the likes of Steve Vai and Ron Bumblefoot Thal (among many) to perform guitar solos, not only advances the theme of chronal manipulation, but also results in the most dynamic and engaging listen in the Star One discography.

The album opens with “Fate of Man,” a song which marries the spaced out, cinematic synth work of previous album openers with the galloping rhythms of Iron Maiden. It’s a brilliant blend that is complimented by Brittney Slayes’ spirited lead vocal and Michael Romeo’s nimble fretwork. Following the rollicking album opener is “28 Days (Till the End of Time).” At 7 minutes and 21 seconds, the song is more of a theatrical slow burn, thus allowing Russell Allen to showcase the depths of his range, while Lucassen experiments with the dynamics and tempo of the piece. The album’s third track, “Prescient,” follows a similar pattern, but has more of an acoustic flare during the verses, and an otherworldly bridge full of contrapuntal vocal lines (courtesy of Michael Mills and Ross Jennings).

Moving away from the quirkier eccentricities of the previous two songs is “Back from the Past” one of the few tracks on the album where I was able to figure out the inspiration on first listen (Back to the Future for those wondering). Though a simple rocker in comparison to many of the songs on this album, “Back from the Past” nevertheless proves to be one of the more infectious tracks given the Deep Purple vibes that the song evokes as well as Jeff Scott Soto’s gruff and unmistakable vocals. This is followed by the album’s title track, which despite being about Bill & Ted’s Excellent Adventure, comes across as strait laced without the adventurous music video. Not to say that the track is bogus. Whatever disappointment I might have with the vocal delivery is mitigated by the face-melting riffs and Adrian Vandenberg’s impeccable guitar solos (though it would’ve been fun to hear Nuno Bettencourt play on this track given his connection to the Bill & Ted franchise).

“The Year of ‘41” proves to be of the more distinct songs on the album considering it’s one of only two three tunes to employ a guest keyboardist and features a very Van-Halen-esque guitar solo from Joel Hoekstra. Meanwhile, “Bridge of Life” might feature my favorite vocal performance on the album, courtesy of longtime Lucassen collaborator Damian Wilson. He has such a clean tone that works for this almost fantastical song about reaching across the arc of time. Then there’s “Today is Yesterday” which has both the heaviest riffs on the entire album, and the funniest line delivery I have ever come across on any of Lucassen’s albums. Whether this comedic effect is intentional or not, it results in an unforgettable track, a good sign for an album dedicated entirely to one general style of music (in this case, heavy rockers).

With the final three songs, Lucassen shows that the album’s heaviness isn’t just for show. It adds to weight to the lyrical themes at play throughout the album, something which becomes notable as we listen to the first verse of “A Hand on the Clock.” Sung with crystal clarity by Floor Jansen, the singer delivers a dramatic lead vocal that perfectly captures the dread of time running out, something which feels appropriate considering the numerous societal issues that bombard us on a daily issue (such as the pro-longed nature of the pandemic.) This takes us into “Beyond the Edge of it All,” the penultimate track on the album. Featuring John Jaycee Cuijpers’s attempt to conjure the spirit of Ronnie James Dio during the song’s opening, the lyrics lean heavily on the fantastical elements of science fiction while at the same time, somehow reading as a metaphor for artistic obscurity. It’s perhaps fitting that Lucassen takes the guitar solo on this track, showing that despite all the talent he’s brought on for this album, he’s just as accomplished as his (more) famous guests.

The album concludes with, “Lost Children of the Universe.” An expansive nine-and-a-half-minute epic, this track tells the tale of galaxy’s end and humanity’s search for a new home, and in order to give it the proper weight it deserves, Lucassen has not only brought in lead vocalist Roy Khan and guitarist Steve Vai (you read that right) but also the Hellscore Choir. All this helps to create a truly cinematic atmosphere that closes the album on a high note.

But as if we weren’t spoiled enough, there’s also a second disc which contains the same songs but with different vocalists. Though many of these fall just short of the power and intensity of those vocals on disc one, the second disc should nevertheless be given a spin (in fact, I might encourage listeners to play the second disc first so they might discover the album in a different way than I).

For such an ambitious project as this, one might think it impossible for Arjen Lucassen to create a coherent work of art, yet here we are with yet another masterpiece under the Dutch musician’s belt. Whether you’re a hardcore metalhead or a traditional progger, you’ll undoubtedly find something to enjoy on Revel in Time.

Released on Feb. 18, 2022 on InsideOutMusic
Key Tracks: Fate of Man, Prescient, Back from the Past, Lost Children of the Universe

10. Beyond the Edge of it All
Lead vocals: John Jaycee Cuijpers
Guitar solo: Arjen Lucassen

4. Back from the Past
Lead vocals: John Jaycee Cuijpers

9. A Hand on the Clock
Lead and backing vocals: Marcela Bovio and Irene Jansen (verses)

10. Beyond the Edge of it All
Lead vocals: Mike Andersson