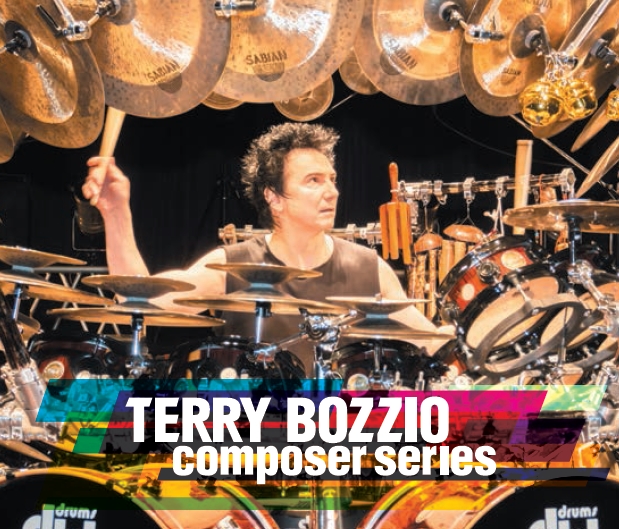 In September 2015, legendary & award winning melodic drummer Terry Bozzio released worldwide what he calls a “Life’s Work” project of Art & Music on the Japanese label Ward Records. The set is now available in the US, Canada and Europe! Bozzio embarked on a world tour to promote it starting in Japan and Europe in the fall of 2015 & continuing throughout the US & other territories in 2016.

Bozzio said, “I’ve been composing, (not just song writing, like for Missing Persons & Jeff Beck) since the ’70s. I compose in all styles (as one might classify them), from classical to ambient, electronic, film-like to fusion/rock or jazz. I have my own character or personality, it’s unique. I work with many different processes from writing notes on paper, to recording live, to several different computer software applications that are suited to the particular result I am trying to achieve. Both Zappa & famed musicologist Nicolas Slonimsky encouraged me to compose & I have had my Chamberworks performed at the Vienna Jazz Festival & in Holland w/Metropol Orkest.”

He continued, “I first got interested in Art & Sketching at the encouragement of renowned artist Don Van Vliet (aka: Captain Beefheart) who I played with on my first Zappa/Mothers of Invention tour in 1975. Don was always carrying markers & paper & it looked like fun, so I bought some myself & started. He was very encouraging. Last year, I released my first project called Rhythm & Sketch in collaboration with the art group Scene Four. It’s been successful & inspired me to do more.” (available at www.terrybozzioart.com)

Bozzio fulfilled major two and a half month US solo tours in 2014 and 2016 in which he displayed his artwork as the stage set while performing melodic, tuned melodies on his strikingly large drum set, to sold out crowds.

“I thought it would be great to share this music which I’ve been working on & keeping to myself for so long. I hope to show a different side of my expression from what people are used to seeing from my solo drumming. And, I wanted to have an abstract painting to represent & be paired with each title to create this hybrid project of music & art,” Bozzio explained.

It is over 70 individual pieces or movements of compositions with a painting in a booklet for each title, along with detailed liner notes for each piece, explaining his concepts, feelings, processes and approach for each. It will be available in a large vinyl-sized box set which includes the book of Artworks, 3 audio CDs & a solo drum performance DVD shot in Japan in 2015. (w/bonus footage, interviews, audio tracks and more). The material will also be made available in a smaller CD size package for record stores, as well as in many or individual downloadable formats online.