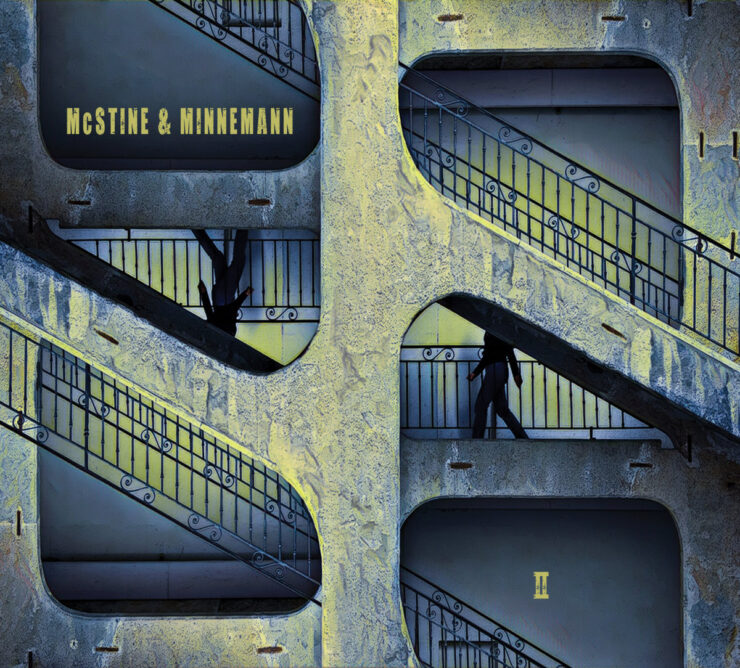 McStine & Minnemann – the duo comprised of Randy McStine and Marco Minnemann – have announced their sophomore album, II. Just three months after the independent release of their self-titled debut, pre-orders for II are now available exclusively on Bandcamp.

While 2020 continues to unfold with dramatic uncertainty, Randy McStine and Marco Minnemann have found inspiration in moving forward, together, as McStine & Minnemann. The two multi-instrumentalists established the band in March, then released their debut album in July. As the record continues to gather praise for its creative blend of musical virtuosity and melodic accessibility, McStine & Minnemann is finding a home within the hearts (and record collections) of fans who enjoy disparate genres such as Hard Rock, Power Pop, Progressive Rock, and Punk.

McStine & Minnemann – II, will arrive on December 4th, 2020 and can be pre-ordered now on CD and Digital on Bandcamp at www.mcstineminnemann.bandcamp.com. The duo’s description of the album and its pre-order details can be viewed below.

2. It’s about ten minutes longer than our first album.

4. The two of us have written, produced, and performed everything on the record, with the exception of a song called “Big Wave,” which was co-produced by Tim Palmer (Robert Plant, U2). Tim added additional sprinkles of guitar, keyboards, and percussion to the song, making him the only additional musician on the album.

6. We started writing and recording “II” while our first album was being mixed, so none of the songs are leftovers from those sessions.

8. McStine & Minnemann II pre-orders are available for CD and download. CD copies will be signed by both of us. All supporters of the CD will also receive weekly updates, where we’ll be discussing the origins of each song on the record.

9. “II” will be released for download and streaming (only on Bandcamp) on Friday, December 4th. CD copies will ship at that time.

10. One of the reasons we’ve been able to offer “II” in such a timely manner is due to your overwhelmingly positive support towards our first one. It’s incredibly gratifying to see that our music is connecting with so many people during these challenging times, and we thank you for encouraging us to continue.