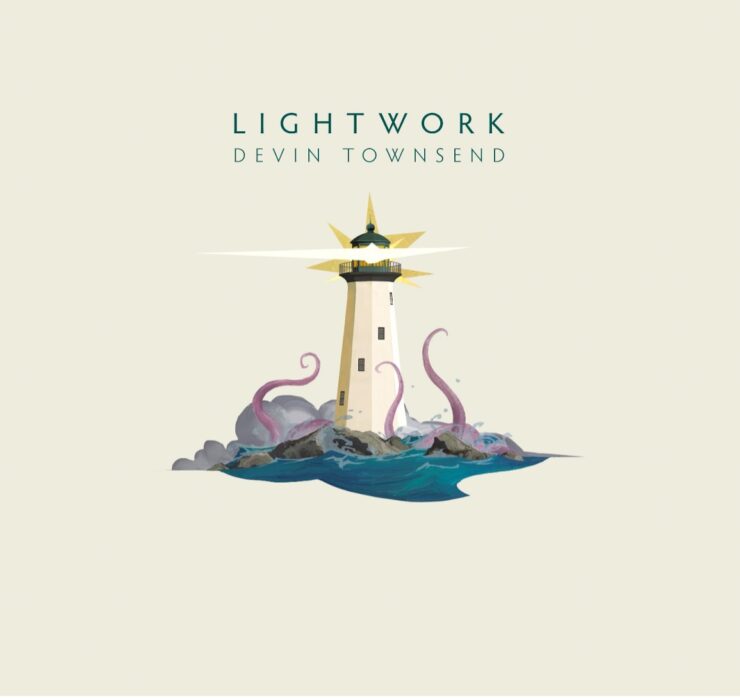 Despite how much the world was upended by COVID-19 in 2020, few pieces of popular media have attempted to address the pandemic. Perhaps the only film of notoriety to broach the topic was Borat Subsequent Moviefilm, only a handful of television programs have incorporated the disease into their stories (Sprung and South Park being a prime examples), and the music industry – while heavily affected by the pandemic – has been rather tepid about reacting to COVID. It seems as though society at large has decided to move past the terrible tragedy that threw the world in chaos, yet many individuals refuse to forget what happened. Devin Townsend is one of those people, and famously expressed his frustrations through ambient music on The Puzzle and Snuggles. In a similar move, his latest record, ‘Lightwork,’ sees the artist emotionally navigate through a post-COVID world.

Though ‘Lightwork’ is focused on exploring what it means to be an artist and creative in today’s cultural climate, it does so through personal experiences rather than (overtly) political statements. The messages are universal enough that they can still resonate with a wide audience, but at the root of the album are intimate questions about how a middle-aged man fits in an ever-changing society. This headspace is crucial in understanding the meaning of the songs. The lyrics can be rather impressionistic and difficult to comprehend in a literal sense, but when paired with the direct, pop-oriented music, the meaning of each piece can be inferred through emotion. To some, this might suggest a rather simple album, but the subtle intricacies layered throughout arguably make this one of Townsend’s more radical works.

“Moonpeople” opens the record on an almost industrial note before Townsend’s sweet vocals kick in, and the track succeeds in subverting expectations at every turn. The chorus isn’t big so much as it is intimate, the song dips into dissonant passages and minor keys several times (most notably during the bridge), and Townsend somehow makes the grittier side of his voice sound as gorgeous as his falsetto. It all makes for a track which perfectly encapsulates the spirit of ‘Lightwork,’ and informs the listener of the main idea: that beauty and chaos are two concepts which coexist in all things.

“Lightworker” follows in the steps of “Moonpeople.” It starts out as a dreamlike ballad before erupting with metallic fury and melodrama during the chorus, and letting Townsend show the range of his vocal prowess during the song’s bridge. “Equinox” pulls a similar trick with its pop-oriented verses that tastefully weave in harsh vocals to bring out the passion in the lyrics. Then there’s “Call of the Void,” which is by far the breeziest track on the album thanks to its anthemic chorus and seeming simplicity.

Though the first half of ‘Lightwork’ leans heavily on Townsend’s skill to craft dreamy melodies with layered yet delicate arrangements, the album takes a heavier turn in its back half. “Dimensions” starts this trend with its dark synth tones and liberal use of death growls. It ranks as the most experimental piece on the record thanks to the atypical structure which sends the listener down a rabbit hole of confusion, especially during the final section which builds and builds before coming to an abrupt halt. Comparatively, “Celestial Signals” offers a more recognizable symphonic metal style that Townsend still manages to make mellow during the verses.

“Vacation” offers a reprieve from the heavier sounds on the second half of the album, letting Townsend deliver some of his most intimate lyrics atop a gorgeous acoustic pop melody that feels inspired by MIKA’s “Staring at the Sun.” (How’s that for a deep pick?) The penultimate placement on the album is rather peculiar, but ultimately works to distinguish itself from the songs on the album. “Vacation” also offers the perfect palette cleanser for the 10-minute epic “All God’s Children,” a track which stacks layer upon layer of vocals, guitar, and other assorted instruments to create an imposing wall of sound. For many prog fans, this would be the highlight of the record, but I can’t help but think the track overstays its welcome just a bit given how little Townsend deviates from the main musical idea (check out the alternate version on the companion CD Nightwork).

Regardless of how one feels about the length of the closing track, there’s no denying that ‘Lightwork’ is another smashing success for Devin Townsend. Like so many of his records, it deftly blends heavy and soft material with ease, but unlike his previous works, it does so to a degree that is shocking. There’s never been such an extreme dichotomy between light and dark on any of Townsend’s albums, and the choice to push himself and do new things such as work with a co-producer (shout out to GGGarth Richardson) shows that Townsend isn’t content to phone things in, even after 25 years. One can’t help but admire such tenacity.

‘Lightwork’ released on November 4, 2022 on InsideOutMusic.