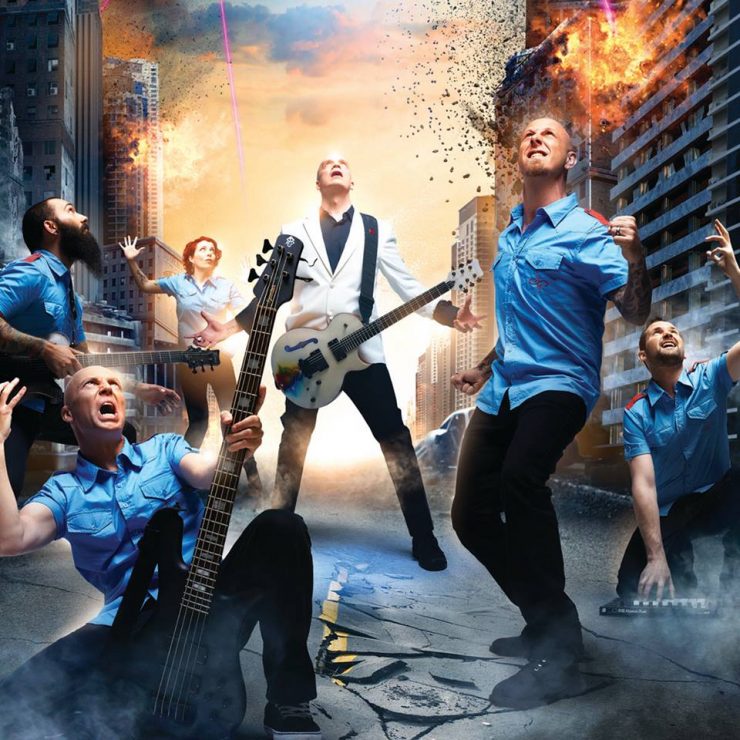 Devin Townsend talks about his latest album Z2, how he approaches a new project, surviving the new music industry and the performance on Prog Nation at Sea.

Devin Townsend has been extremely busy this year.  Not only did he release an album under the moniker Casualties of Cool earlier this year, but now he has put out a double album called Z2 which contains two separate albums, Sky Blue and Dark Matters.  Dark Matters is the sequel in the Ziltoid saga while Sky Blue is more in the line of Epicloud as a collection of new songs.

We spoke with Devin about the new album, how he approaches a new project, surviving the new music industry and his interesting performance with PSMS at the Prog Nation at Sea Cruise.

You have said you prefer things that are softer and quieter but your shows are extremely loud and intense?  How is that?

Maybe that’s the sole reason.  If you spend your life doing something that’s a wall of sound and impressive visually and aurally, good lord man.  When I get home from tour or when I get home from tour from making the music, the ideas that compel me to write are based on a vision, a lot of time those visions are based on things that end up epic, so when I get home people are like “Do you watch Dexter” and I’m like, F No, I don’t want to watch that S*** when I get home.  I watch antique road show, I watch Househunters International because it doesn’t imply anything to me.  I don’t want the end of the day to have more drama, more intensity, more volume.

What brought you to doing the 2 albums this time around?

After doing records such as Epicloud, Addicted and touring the hell out of them the last 5 years we’ve established some momentum for once in the live arena and everyone’s on salary and that sort of thing and you’re part of a team, management, the label, the band.  They’re like ‘what are you gonna write next’, well, we’re gonna follow up these moderate successes we’ve with an incredibly expensive orchestral records about farting aliens. And they’re like ‘oh, well, do you have anything else you could maybe do while you’re at it?’  And so I just wanted to do Ziltoid, that’s what my compulsion was driving me towards right now.  So they were like it was gonna cost a fortune.  If you want to do that it’s cool, but can you give us something else as well.  So that’s how it started.  Once I started it, I realized it wasn’t going to be as simple shitting out another version of what I’ve done prior.  It became a real challenge. I had to dig deeper than I expected to get to a record that meant something to me.  And the benefit of that is now that it’s finished, “Sky Blue” is something that I’m very proud of and its something that I wouldn’t have reached for had I not been pushed.

Are you in charge of all the Ziltoid website and videos and everything that goes into that?

Yeah, for the most part. I’ve got so much that I do on a daily basis that prevents me from doing the technical aspects on a lot of it that I’m getting to the point in my career where I can delegate, which is awesome.  Because I’ve got this consistent stream of creative ideas that given my druthers that I’d love to see actualized, websites and videos and puppets and orchestras and all sorts of stuff. So having done the pledge drive that we did that allowed me to have some capital, extra from what the label has put in and from what we’ve generated as a live band, put me in a position where I could finally do it and no one was gonna give me a hard time about it, because essentially I’m spending my money to do it.  You can either take the money that we got from the pledge drive and just sock it away on a personal level or you could do, this is my thought, something that I’ve been wanting to do for a long time that I haven’t found the backers for, I haven’t found a label that was necessarily willing to put in the capital that I think the concept warrants.  So I just went for it.  So I said earlier, I;m on a team and that team includes a lot of people that can do a lot of things that I can’t.  So I tend to delegate certain people, management, visual guys, puppet makers, all that sort of stuff and we managed to pull it off.   Whether or not its something that long term will have any legs, like eventually you will see a Ziltoid movie or something it doesn’t really matter, it was more of a fact that the record in this particular period in my career represents a type of artistic freedom that 25 years into a career, that’s pretty cool.