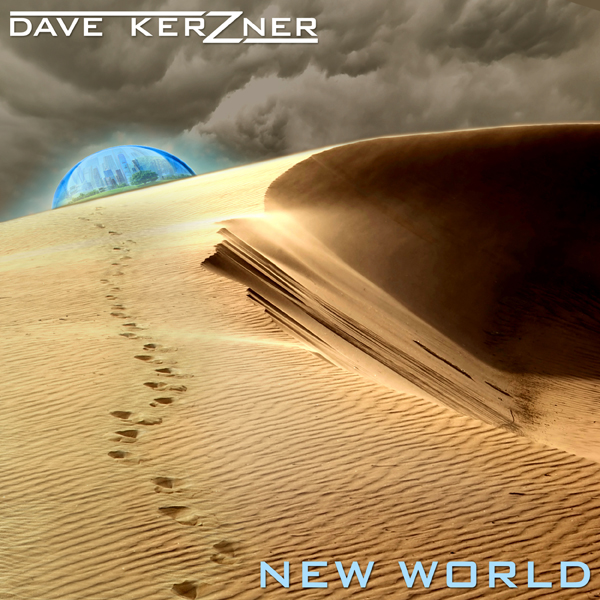 What started from a Kickstarter campaign for Dave Kerzner’s debut solo album slowly turned into a who’s who of Prog royalty and the album continually expanded into a deluxe edition with bonus tracks and over 2 hours of music.  Kerzner, formerly of Sound of Contact, put his list of musical friends to good use on his concept album about a main character being left behind and surviving his demons on his way back home.  The album’s backing band features Nick D’Virgillio (Spock’s Beard, Big Big Train) on drums and Fernando Perdomo on Guitars and Bass who both turn in brilliant performances.  Guests include Steve Hackett (Genesis),  Francis Dunnery (It Bites),  Colin Edwin (Porcupine Tree), Billy Sherwood (Yes), Keith Emerson (ELP), Simon Phillips (Toto), Durga McBroom (Pink Floyd), Jason Scheff (Chicago) among countless others.  While the performances are excellent by all involved, it is the songs that standout the most.  Each song has a purpose and is memorable.  Kerzner builds a true album where listening from beginning to end is worth it and the payoff is there with the brilliant closing track.

One of the advantages Kerzner brings to this album is his expertise in sound stemming from his background as CEO of sound effects company Sonic Reality.  The landscape of sounds, effects and instruments employed here lift the listening experience.  Throw in the guest performances and you can see why it is an impressive recording.

The Pink Floyd influence is clear and at times obvious such as on the album’s first single “Stranded.”  And by no fault of his own, Kerzner is a dead ringer for Gilmour as a vocalist at times, such as on “Into the Sun.” You can also hear bits of other influences scattered throughout such as Genesis on “Crossing Of Fates” and Steven Wilson on “Redemption.” But Kerzner does a brilliant job of meshing all of these influences together and adding his own style resulting in a cohesive collection of interesting and memorable material.

The opening of “Stranded” is haunting and commands attention.  The slow grind of the drums as they kick in is very powerful and immediately the quality of the production is evident.  Steve Hackett is noticeable immediately on the solo in the track and really hits it out of the park on this one.  The fast paced vocal barrage at the end is a surprise on the track and is one of the parts where Kerzner is able to separate himself from simply a reincarnation of his influences.

Songs like “Into the Sun”, “The Lie”, and “Under Control” continue with the tone set from the opening track.  “Into the Sun” has a great long drawn out ending while “Under Control” has more of an edge. “The Lie” seems like it could be about his split with his former Sound of Contact bandmate Simon Collins and features a beautifully executed middle section that takes the song on a detour before returning to the intense chorus.   The instrumental “Crossing of Fates” has parts that would make even Tony Banks himself proud while  “My Old Friend” is dedicated to his former colleague and musician Kevin Gilbert with whom Kerzner worked with before Gilbert’s untimely passing.

This album is much more progressive than his work on Sound of Contact, which had more of a pop lean in many of the songs.  And while the sound of his former band is present throughout, as Kerzer was a key writer on that album, it is the stellar “Ocean of Stars” that is the most stylistically matched with the material on “Dimensionaut.”

The album seems to really peak with the last 3 tracks on the album, beginning with the rocking “Nothing.”  A mix of ELO and Abacab-era Genesis, this sounds like a single and has a great middle section as well as a great hook.  It is easily the albums most upbeat and uptempo track. “New World” is a beautiful Beatle-esque piano ballad that seems to find the character at a crossroads and ready to accept his new world. It is a stellar track featuring David Longdon from Big Big Train on backing vocals.  This all leads up to the album’s best track, the 17 minute “Redemption.” The song rolls through numerous changes from the opening vocal harmonized verses to the cinematic middle sections and the grandiose ending that could match any great Prog track.

This is a great album, one that includes everything that is exciting about Prog and combines the influences of the past with an updated twist.  While it took him a long time to get to this point, let’s hope it’s just the beginning.

Get the album here:  https://sonicelements.bandcamp.com/album/new-world