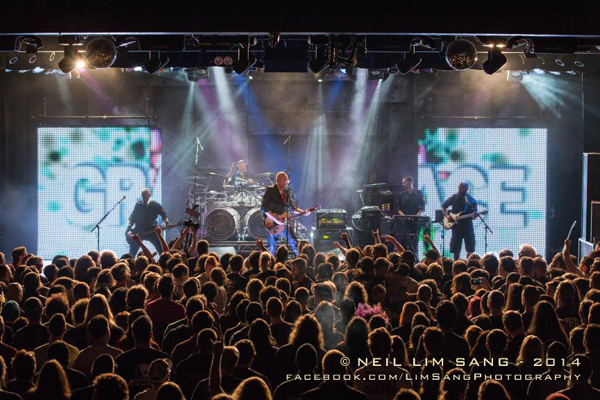 When I saw the lineup for this tour I just knew I had to go. Up and comers Monuments, the dual guitar attack of Animals as Leaders, and the mighty Devin Townsend Project all on the same bill?  Are you kidding me? You’d have to be crazy not to find some way to go to this show.  So on a rainy Wednesday afternoon I left work early knowing traffic was going to be ridiculous (why people in Austin can’t seem to figure out how to drive in little rain without running into each other is beyond me).  After making our  customary taco sacrifice ritual to the metal gods we arrived at the venue, “The Backstage Live” in San Antonio.  The metal gods must have pleased with our earlier sacrifice as we arrived mere minutes before Monuments hit the stage, couldn’t have timed it better if we tried. If you haven’t heard these guys before, do yourself a favor and check them out. Their recently released 2nd album (first album with singer Chris Barretto) “The Amanuensis” has all the elements of epic Progressive Metal.  Tight Grooves, odd meters, poly-rhythms, excellent musicianship, cachy melodies…all the good stuff I love.  If Tesseract and Periphery had a baby, it would sound something like Monuments.

You could feel the anticipation in the crowd as they began screaming as soon as the lights went down and the intro music started.  The Monuments boys were in top form, crushing through their set like a machine.  John Browne’s guitar playing was super tight and Chris Barretto’s vocals were surprisingly good.  His growls were crushing and clean vocals right on key. The song “Garden of Sankara” was especially cool, as Chris Barretto pulled out a Saxophone (or as he called it his new Sax-fx, haha! Ok so only nerdy guitar players will get that one) and played a very cool intro and solo for the song.  I love it when bands change things up live, and this made their set even more memorable.   They ended their set with the track “I, the Creator” in which Chris commanded the crowd to perform an “exercise in unity” as he called it, by having everyone get down on one knee and then explode when the song really kicks in.  I have to say it was kind of cool to watch.  I was pleasantly surprised by the band!  They kept the crowd going with lots of energy, great grooves, and even some crowd surfing by the singer.   I’ll definitely be keeping a look out for these guys next time they come around, I would have loved to hear them play for another 30 minutes!

Next, it was time to make room for another beer before the next band…wait what’s this…a bathroom attendant at a metal show? Ok, I have to say I’ve never seen that before.  However, it was the nicest smelling restroom I’ve been to at a club, so kudos to that guy!  Ok back to the show…

One of the drawbacks of such a killer bill, was that Animals as Leaders and Devin Townsend were “co-headlining”.  Meaning we only got about an hour or so of each band.  With Devin’s catalog (some 22 albums), it would have been great to see him play longer.  Hopefully we’ll get to see a full Devin Headlining tour in 2015.

I was curious as to how Devin Townsend’s music would sound in a live setting having never seen him live. His albums are like a wall of sound, so many layers and textures it’s hard to even process everything that’s going on.  At the same time that’s what makes them so awesome!  One new thing on this tour, is that in addition to his normal Devin Townsend Project Band Mates, he’s added a keyboard player.  I thought this was pretty cool considering most bands nowadays just use backing tracks for almost everything.

Devin was up next and kicked things off with a song from one of my favorite albums Biomech, “Regulator”.   The band and Devin both sounded great.  I always thought he was under appreciated as a vocalist.  The man has some pipes!  Devin seemed in good spirits and filled the spaces between songs with his trademark silly banter.  Even commenting after the first song that it sounded like they were playing in a car park (I’m guessing that’s Canadian for parking garage?).  Sadly, I have to agree, the venue was not doing any of the bands any favors in the sound department.  All the bands were plagued by muddy bass and ear piercing treble nastiness.   Anyway, next up were two tracks from his new double album, “Rejoice” and the slower ballad “Midnight Sun”.  I have mixed feelings about ballads during metal shows.  If not done right they can just suck the energy right out of the crowd, however in this case, the song was interesting enough to keep the crowd engaged and didn’t take away from the flow of the set.   Devin’s zaniness was in full effect and kept the crowd laughing between songs.  Seriously, a Devin variety show would be hilarious.  The band kept right on rocking through songs old and new, making good use of the limited 1 hour time slot.  Highlights included news songs from Z2, “March of the Poozers” and “Ziltoid Goes Home”, and the amazing closing combo of “Grace” and “Kingdom”.  Devin even donned an awesome flying V guitar that included glowing blue lights and a built in fog machine!  How metal is that!  All that was missing was a giant Ziltoid head flying across the stage!   Overall, a great set by the band despite a few technical issues, can’t wait to see the Devin Townsend Project do a proper headlining tour!

Sadly we weren’t able to stay for Animals as Leader’s set, due to my friend getting slightly ill, but that’s another story. (You can read a recent review about Animals as Leaders live show here)  Oh well, the main reason was to see Devin and I’d already seen AAL three times already.  Still it would have been nice to see them again since they kick so much ass live.   Overall it was a great showing by all the bands, despite some sound and technical difficulties.   I definitely recommend checking out this tour, particularly if you’re a fan of progressive and technical metal.    After finally getting to see DTP live I can’t wait to see them again in a proper headlining tour and get to hear a larger mix of tunes.  Also lookout for Monuments, they’re definitely a band to keep your eyes and ears on!