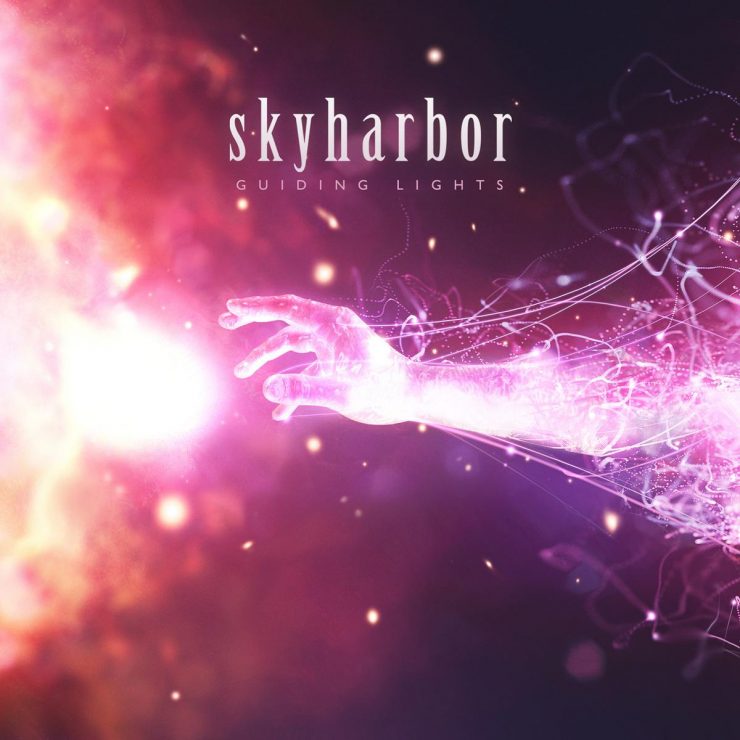 For those not familiar with the band, Skyharbor is the brainchild of Keshav Dhar.  After completing his degree in Biomedical Engineering in India, Keshav found he was actually better at music production and writing than he was at Engineering.  He soon decided to begin work on a solo project after compiling a multitude of recordings while studying for his degree.   Hearing some instrumental clips on the internet, Daniel Tompkins, who had recently left Tesseract, contacted Keshav and asked if he could sing over his music.  Having Dan provide vocals on the album gave the record instant credibility and a slew of new potential fans.  The band was signed on to Basick Records and their debut “Blinding White Noise: Illusion and Chaos” was released as a double disc album in 2011.  The first disc featured Dan Tompkins while the vocals on the 2nd disc (Chaos) were handled by Sunneith Revankar from the Indian band “Bhayanak Maut”.   Guest artists also included Marty Friedman, who guest soloed on the tracks “Catharsis” and “Celestial”.   The album garnered high praise, therefore the next logical step was to form a live band.  They were joined by Anup Sastry (drummer for the band Intervals) who had already created some youtube videos of himself drumming over some of Keshav’s tracks.  He joined the group as they supported Lamb of God’s tour of India.  In November of 2014 the band released their latest album, “Guiding Lights”.

The band released the single “Evolution” in the late fall of 2014, and it is one of my favorite tracks on the record.  It has a bit of everything and gives the listener a taste of what to expect from the record.  Downtuned distorted stabbing guitar riffs, clean atmospheric sections, odd time signatures, and of course Dan Tompkins’ outstanding vocals.  The verse has a really catchy melody and I found myself humming it to myself throughout the day after just a few listens and the ending from 5 minutes on is stellar.    “Idle Minds”, is one of the longer tracks at 7:48.  The section starting at 2:50 where the song slows down a bit and then ramps up again is very cool with some interesting drum beats by Anup Sastry.

“Halogen”, another favorite on the record is a bit slower than the previous tracks tempo wise.  There’s some nice interplay here between the bass and the drums during the verses, before the distorted guitars return for the bridge.  This is another longer track at 7:02 and really starts to shine at around the 2:00 mark.  The chorus at 2:30 is captivating.  Goosebumps!  Too bad it’s so short.  It could have been one of the best moments on the record if they would have developed it further and came back to it at the end of the song.  Still a good track that ends kind of strangely with some electronic beat with atmospheric guitars and some female talking, totally unnecessary in my opinion but it does add to the overall atmospheric feel to the album.  The first 6 tracks are similar in that they are the “heavier” side of the record, with more distorted guitar and upbeat tempos.

Three of the final 4 tracks are slower tracks, and some of them highlight some of Dan’s best vocals to date.  The odd track out of the bunch is “Kaikoma” which while still a good track, seems to be placed in between the other tracks just to give the listener a break from the other slower more atmospheric tracks, “Patience”, “Guiding Lights”, and the closer “The Constant”.

“Patience” was the 2nd single and video for the record, is one of the best tracks on the record.  Dan’s vocals are so tender and spot on for this track.  The instruments are expertly mixed and layered, there are strings, acoustic guitars, electric guitars, and excellent harmonies going on.  Dan mixes falsetto and normal singing to great emotional effect.  Just go listen to it!  Really an excellent song all around.  The video for this song is also very cool and was animated by Jess Cope and the team at Owl House Studios (which has also done videos for Steven Wilson and Devin Townsend among others).

Clocking in at 9:22“Guiding Lights” has got all the proggy stuff we love; Groovy verses with interesting time signatures.  Dan’s vocals again are amazing on this song.  The intertwining of the guitar parts in the verses really let the vocals breathe while accentuating the melodic content.   What I love about this track is its minimalism in the instrumentation while still remaining complex and melodic.  The vocals around 3:08 are just awesome, with Dan effortlessly switching between falsetto and normal singing in the same vocal line.   It reminds me of some of the stuff Michael Jackson would do.  The distorted guitars during the next section really have some weight to them, building up to the crescendo of the song.  For once, the proggyness doesn’t get in the way of the good sections of the song, unlike in “Halogen”, the song ends repeating one of the prettier sections of the song with Dan embellishing over the vocal melody.  Another must listen to track off the record, in my opinion.

We get an emotional break with the track “Kaikoma”, which leads us to the close “The Constant”.  A 9:33 second track “The Constant” is like “Guiding Light’s” brother.  Love the bass and drums again during the first verse.  Some fast riffing by the bass over some side-stick beats by Anup.  This song really brings it all together with soaring vocals, groovy verses, heavy guitars in the choruses, and excellent melodies throughout.  A fitting ending track to an overall excellent record.

This record is one that did not disappoint and will be on repeat for a while.  There is so much to take in and it really takes multiple listens to appreciate what a great record this is.  More of a cohesive progressive offering than their previous release, I think the band has matured and has found its sound.  The downtuned distorted guitars seem to clutter the lower end of the mix at times, and if listened on a cheap set of headphones almost seem to clip or cause the headphones drivers to distort, so definitely make sure you listen to these on a good set of speakers or headphones to get the most enjoyment out of it.  The music is excellent, but never flashy, and gives plenty of room for Dan’s vocals to shine.  The songs are clearly the key here.  Meaning the instrumentation, odd time signatures, and poly-rhythms don’t distract from the songs.  It’s about the whole, the sum of all the parts working together to create an emotional ride for the listener.  After all that’s why we listen to music, because of what it makes us feel.  So if you haven’t listened to this album yet, what are you waiting for!  You’re missing out!