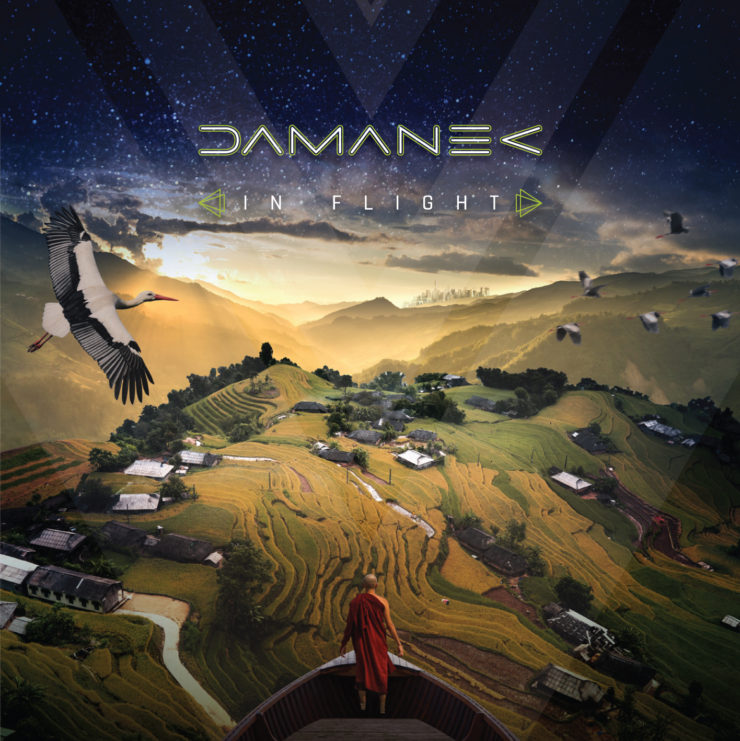 Review of the new Damanek album ‘In Flight’

One of the surprise albums of 2017 was the debut album from Damanek, ‘On Track.’ The band, the brainchild of Guy Manning, former member of The Tangent and the United Progressive Fraternity, offered a mix of world music and prog that brought an alternative to some of the metal-influenced prog of recent years. Now, with a quick turnaround, Manning brings Damanek back with the follow-up, aptly titled ‘In Flight.’ The album shows a group that has definitely found its wings and taken off. The songs are more mature, creative, melodic and dare I say, progressive.

Much of the same world music influence hovers over the tracks, but now there is a bit more edge and progginess to it. Returning to the proceedings and joining Manning here is Sean Timms, who is reveling in the success of his band Southern Empire, who also had a huge breakthrough this year with their album Civilisation. Dan Mash, Antonio Vittozzi, and Marek Arnold also return from the previous album, adding to the cohesiveness of the group. But overall, it is Manning and his unique style and voice that seems to drive this record.

From the onset with the track “Ragusa” the album takes a more progressive, Alan Parsons Project-style. The song has a brilliant backbeat and is flooded with interesting sounds and a wonderful groove. Much like the oddly named opening track from ‘On Track’, “Nanabohzo And The Rainbow,” “Ragusa” sets the tone. However, things take a slight interesting turn on the very next song “Skyboat” which begins with a latin groove. The songs weaves its way through the verses incorporating sax solos, percussion and a choir for an uplifting climax. One thing that becomes apparent when listening to this album is that the way the songs starts has very little to do with where the song ends up and what you will hear along the way. Nowhere is this more evident than on the track “The Crawler,” one of the album’s strongest tunes. Here Manning channels Ian Anderson on the subdued opening verses before the song erupts into an AOR-style chorus with a brilliant clarinet refrain that recalls something Sting might do on one of his solo albums. The song then shifts to a pure smooth jazz breakdown in the middle before once again diving into hard rock bombast and then settling effortlessly into the chorus reprise.

One thing this album has that its predecessor did not is a 3-part epic. The track titled “Big Eastern” is a near 30-minute triumph divided into 3 sections. Manning described the 3 parts in an interview with The Prog Report: “I had an idea about how hard it must have been in rural poorest China for a young family living a subsistence life literally having to get on their hands and knees to pull crops from the under nourished soil. Once I had them in my minds’ eye I wanted to contrast how a group of teenagers (same age) had it living in New York and compare East with West. (That is Part One – Cruel Skies). The Chinese farmers there also deal with natural disasters, earthquakes, floods etc. and so a migration started to move them from their homelands to the West Coast of America (San Francisco, Chinatown). Part Two (The Shaking Earth) describes the natural upheavals from nature’s POV!
Part Three (A Life in Chinatown) sees the new generations of the migrants now living in the West and finding it hard to reconcile their traditional ways of life with a creeping and insistent modernization found in their new life and settings.”

Part 1 is the most memorable of the 3, with a main keyboard motif that is repeated throughout and is the central theme of the piece.  The familiar world music vibe is carried on here, but it is the vocal melodies that are superb and transform the music into something more. Part 2 is slightly more uptempo, while Part 3 incorporates diverse instrumentation.  These are meticulously written pieces that should be appreciated among anyone listening to prog music in 2018.

In Flight is a sign of a band that has found its sound and knows where it wants to go.  The songwriting is on point and the performances equally entertaining.  Let’s hope there is more to come in the future.