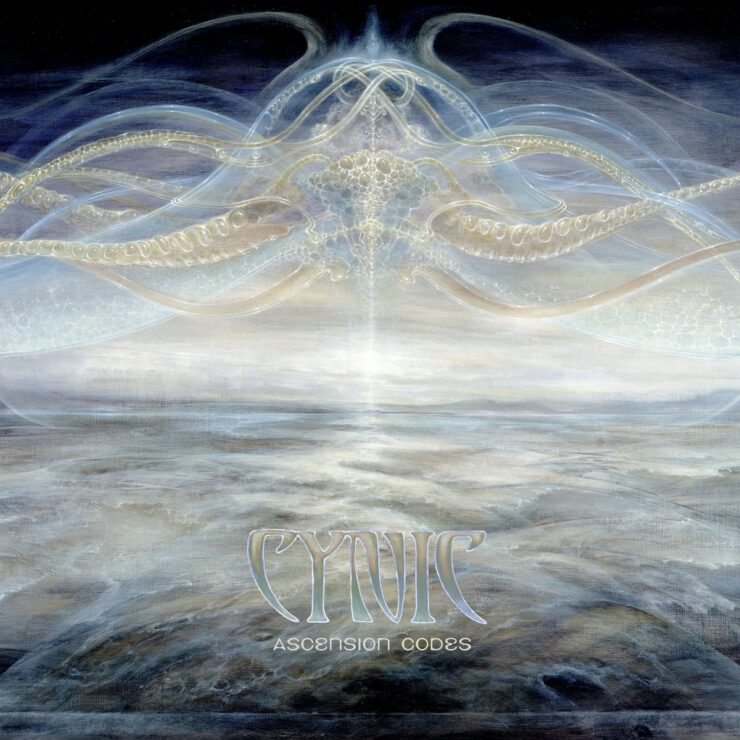 Just when 2021 seemed to have reached the point of becoming saturated with genre-giants new releases, comes what many would agree is an unexpected release from progressive/death metal pioneers Cynic. The originally South Florida based group have never been ones to have ‘regularly scheduled’ releases as their output has been more spaced apart than anyone in prog, with their most recent release being a single (Humanoid) from 2018. However, what makes this surprise bittersweet, is the recent passings of both Seans (Reinert and Malone) in 2020. Cynic’s creative force in Paul Masvidal has used this tragedy as motivation and perhaps therapy to deliver Ascension Codes. This album is a fitting tribute to his fallen bandmates as Cynic continue to be masters of the unexpected.

At first glance, the album checks in with 18 tracks for 49 minutes. Approximately half of the tracks are short introductions or transitions which are generally characterized as spatial and ethereal. These are what make the album flow from beginning to end as part of the presentation of a continual musical encounter. As the listener is weaving through the compositions, it feels like an immersive artwork experience taking you on a journey beyond our atmosphere into the space frontier. For those who lack the patience or the attention span, a modified playlist can narrow the list to 9 songs (which is still 45 minutes) of excellent Cynic music and moments ranging from spacial mysticism to heavy riffs and vocoder effects to jazzy motifs and ambient synths. The core lineup of Masvidal’s guitar and vocals, Matt Lynch’s drum work (Trioscapes, Nova Collective), and Dave Mackay’s synth bass and keyboards, deliver a very familiar sound and style which is a significant feat considering the replacement of a legendary rhythm section. Like all of the preceding albums in the Cynic discography, Ascension Codes has its own sound and personality while still maintaining the context of the Cynic sound. The most noticeable difference is the use of Mackay’s bass synth; Masvidal did not want to put the expectation of a bassist trying to sound like or be like Sean Malone. The bass synth is tastefully done and adds a different dimension which results in a very unique blend with Masvidal’s guitar work.

“The Winged Ones” is an instrumental opener which showcases a blend of the jazzy and progressive facet of the band. “Elements and Their Inhabitants” is a more guitar riff-centered composition with vocals layered with effects and a terrific musical build up to the end. “Mythical Serpents” is the longest stand-alone track at almost 6.5 minutes. Being one of the album’s highlights, this song is also one of the heavier arrangements and features some of Lynch’s busiest drumming. “Architects of Consciousness” also showcases the heavier and technical interaction between Masvidal and Lynch, along with melodic vocals and constantly moving bass lines.

“Aurora” showcases the vocal melodic side of the album; perhaps making this the most ear-friendly song which new listeners can become acclimated. “In a Multiverse Where Atoms Sing” is another album highlight with Lynch’s most intense performance. This song is covered with the perfect combination of musical technicality, melodic delivery, and layers of guitars. Album mixer, Warren Riker delivers a great presentation which is clean, powerful, and atmospheric. Last is “Diamond Light Body” which brings the album to a climax with a big sound over the last couple of minutes with an epic soaring chorus.

For the long term and true Cynic fan, to hear the complete experience from start to finish will be very natural and familiar. In a format best suited for headphone listening, the flow and emotion of the album are evident throughout the listening experience. Cynic, under the perseverance of Paul Masvidal, have added another great album to 2021 and to their arsenal. Is this their swan song? Will Cynic continue? These are the kind of questions Cynic fans have been asking for decades; therefore, there is no reason to expect any answers anytime soon. Either way, this is what we have come to expect from Cynic…the unexpected.

Released on November 26, 2021 on Season of Mist Records
Highlights: Mythical Serpents, Aurora, In a Multiverse Where Atoms Sing