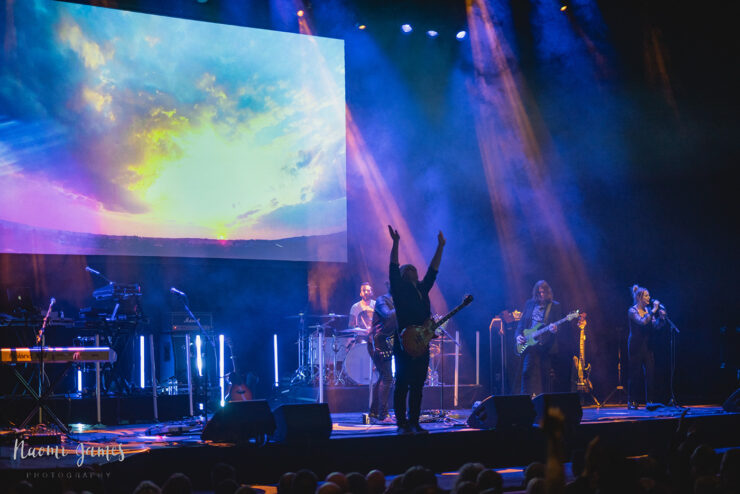 Review of the Anathema show in London on March 7th, 2020

The first thing you notice when you enter the legendary London Palladium is how deep and clean the carpets are: usually London rock venues are dark, dirty and have unnervingly sticky floors. Opened 109 years ago, the Palladium is famous for hosting a hundred years of theatre and West End musicals and – of course – as the venue for the annual Royal Variety Show: the Royal Box on the right hand side of the stage is where the Queen sits for this, and has her coat of arms proudly emblazoned at the front. With white stucco plaster mouldings and gold leaf highlights throughout – even in the bar – it feels not unlike being inside a wedding cake. In short, the Palladium is classy to the point of aristocratic, and knows it. And, of course, class – as the whole world knows – is a British obsession. 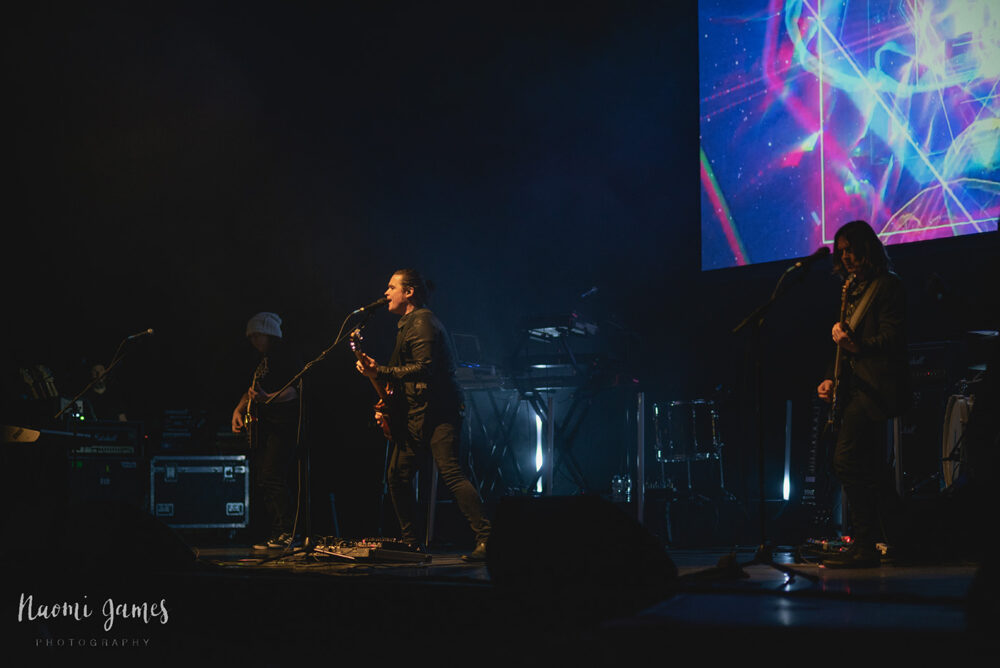 Who, then, could not feel a little intimidated by this venue for thoroughbreds? It’s regarded as great honor to play here: pop royalty Madonna had just completed a series of dates here and maestro Van Morrison had already sold out six nights later in the month. How would a rock band from Liverpool cope? Of course, Anathema knew that it had been done before by another band from their city – a little-known foursome called The Beatles – but their awareness of the success of these illustrious antecedents could hardly have helped their nerves.

The band’s intro music was certainly appropriate for the occasion: a classical strings piece that – like much of Anathema’s own music – started quietly, then rose to a roaring crescendo as more modern instruments were blended in. Lead singer Vincent Cavanagh promptly walked straight to the front of the stage to take it all in and salute the audience. 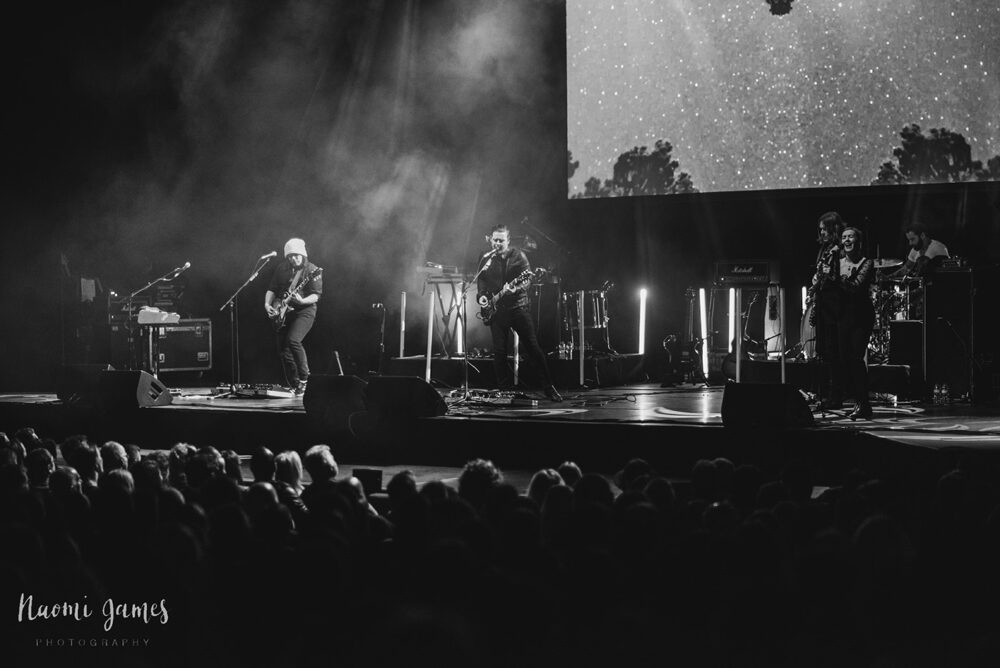 The gig had been billed as a celebration of the tenth anniversary of We’re Here Because We’re Here – the album that had reinvented and re-energized the band and found them a new audience in the prog community – and play it in its entirety. Sensibly, as it turned out, the band decided to tackle this tribute right at the start of the set, and the gentle arpeggios of opener “Thin Air” began to ring out from Danny Cavanagh’s guitar and the sound steadily built into its glorious climactic roar.

This was followed of course by the keyboard entry for “Summer Night Horizon”, with multi-instrumentalist Daniel Cardoso’s impressive drums entering with a thunder that Bonham himself would have been proud of. Live, the complexity of Anathema’s drum parts become more evident – not so much that take they steal undue attention – but they are also quite capable of providing the kind of barrage that the later, louder, sections of many of their songs demand. 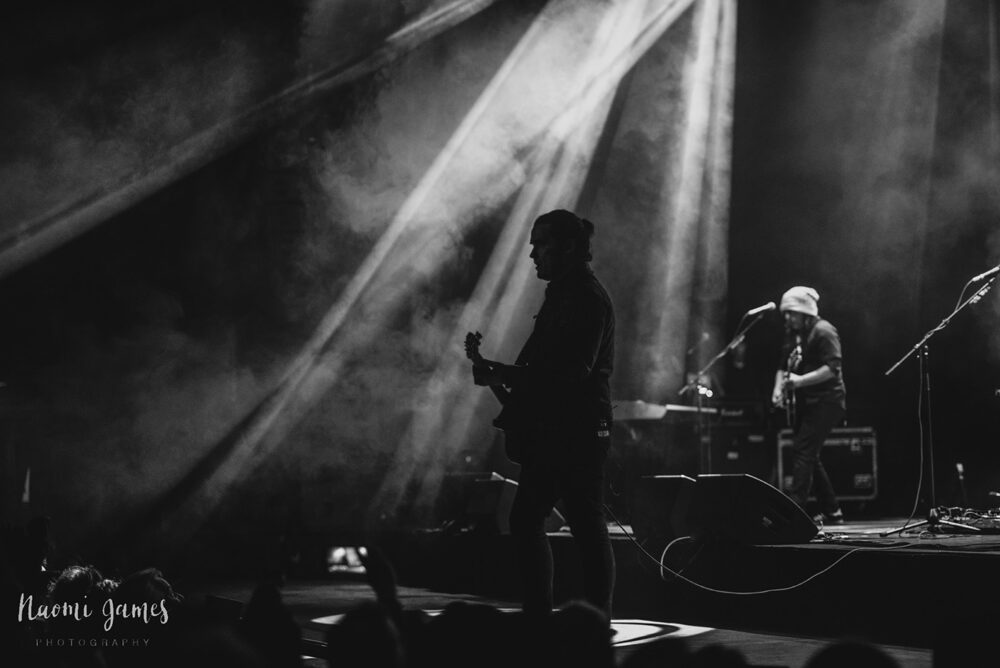 The gentle piano opening of “Dreaming Light” – the song that the Cavanagh brothers consider to be the best on WHBWH – saw Vincent, usually the dark, brooding presence at the centre of the stage (particularly in comparison to his brother Danny’s bouncing enthusiasm) cradle the mic stand lovingly while singing the forlorn “Suddenly, life has no meaning”.

My personal favorite from WHBWH is the extraordinary driving duet that is “Everything” – and it was here that it became apparent that all was not going quite as well as it could be. As Danny rang out the instantly recognizable opening piano cadence (what is that time signature?), he responded by chiding the crowd’s muted applause with “You can do better than that!”. Indeed, to me, it was evident that there are a number of problems that were stopping band and audience from connecting properly, namely, the crowd still sitting down, poor stage lighting, and the extended front of the stage keeping the band further away from the audience than would normally be the case.

Fortunately, halfway through “A Simple Mistake”, Danny had clearly had enough of all this deference and distance. Flinging his hat off, he began the guitar build at the centre of song by jumping to the front of the stage and yelling at the audience to stand up. Relieved to have at last been given some direction, they obliged… and the gig was suddenly transformed. “Stay on your feet!” shouted Danny at the end of the song – and they did so enthusiastically until the end of the gig. 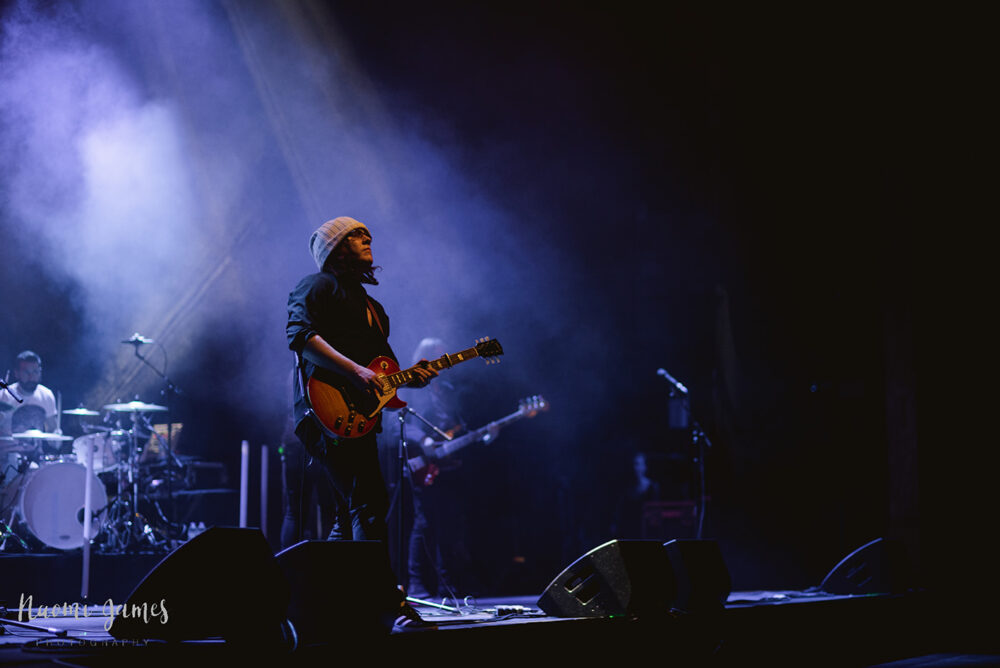 Better still, in “Universal”, Vincent returned to the front of the stage (seemingly happier to have a guitar back in his hands) and the gig really began to fly, with Danny delivering the blistering solo at the end of the song to rapturous applause. The band had promised to make a few tweaks to some of the WHBWH tracks, and its final piece – “Hindsight” – was topped and tailed by a few bars from Amazing Grace, which was perfectly placed.

I think it’s fair to say that having completed the responsibility of performing WHBWH, the band visibly relaxed – as did the audience. “Let’s do some other stuff, shall we?” asked Vincent, and the band launched into a variety of favorites, including “The Lost Song Part 3”, “Distant Satellite” and the slow build and hypnotic vocoder of “Closer”, which ended with Vincent spread-eagled on the floor with hands gripping both his guitar and effects pedals.

“Hey, Lee” shouted Danny, “You’ve played the Palladium!” “So’s Madonna!”, she replied. “Yes, but you sing better than Madonna!” he responded, and so she did, in her showpiece number “A Natural Disaster, with all the lights turned off and audience phone lights providing a glittering backdrop to the song’s aching melancholy. With that in the bag, the band were clearly now feeling confident enough to take the venue on on their own terms: launching into Untouchable Part 1, Danny echoed Lennon’s famous quip (admittedly made at a different London theatre – The Prince of Wales – in 1963): “People in the cheap seats can clap your hands: everyone else, rattle your jewelry!” 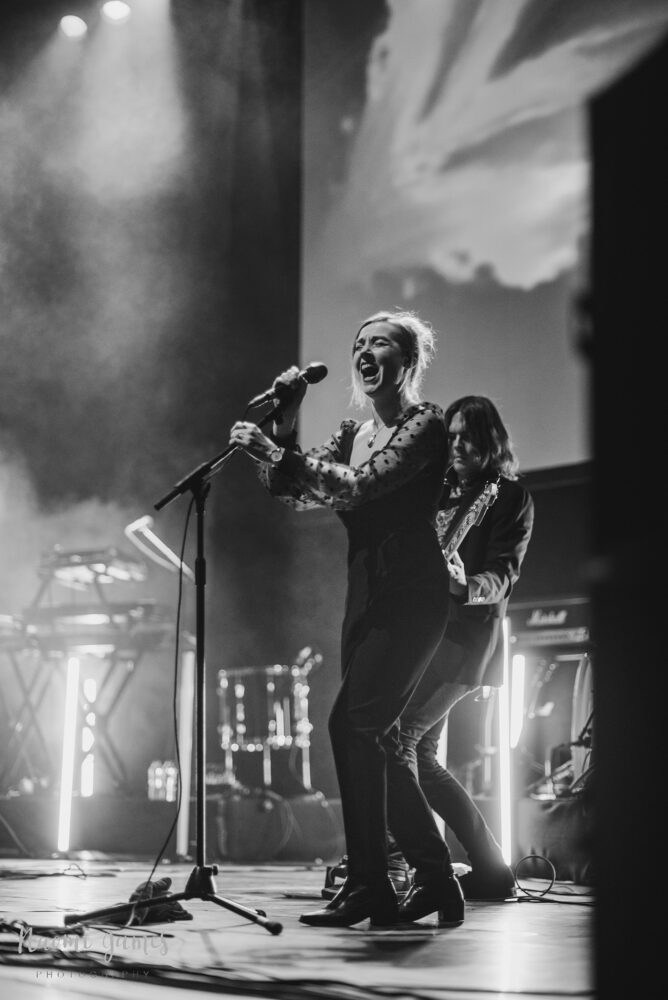 And it was the “Untouchable” couplet of songs that finally lit the blue touch paper: as the mid-section of Part 1 began to build, and Vincent sang over the driving crescendo:

It became clear that this was the song that the gig had been waiting for: suddenly people were standing everywhere – even in the Royal Circle – clapping and singing as one.

And thus it ended (after an encore consisting of a clever interpretation of Hans Zimmer’s theme from Interstellar): to the strains of – of course – the Beatles’ Twist And Shout ringing over the PA, Danny asked one more time for the house lights to be brought up and the band came to the very front of the stage to look up in silent wonderment at the storm of applause that they had conjured up out of these august seats. The evening had perhaps not been an entirely easy journey, but that must have made the final triumph all the sweeter. The Kop (Liverpool FC’s famous crowd of supporters) had come to the Royal Palladium and taken it over as its own.