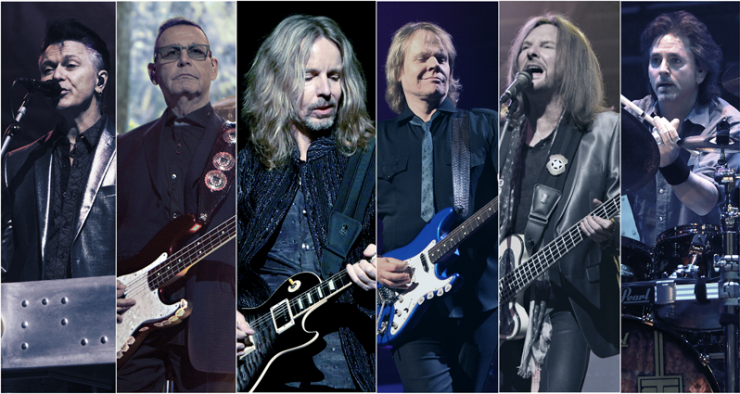 Styx recently re-emerged with a brand new studio, their first in 14 years, The Mission. The album has been hailed as a return to the band’s classic roots and even debuted on the Billboard Rock Charts at #6. (Read The Prog Report’s review)  We recently caught up with drummer Todd Sucherman who has been with the band since 1996.  A successful session drummer in Chicago in the 80s and 90s, he was invited by the band to play on a re-recording of the hit “Lady” for a Greatest Hits album. Shortly after, due to drummer John Panozzo’s failing health, Sucherman,  was asked to join the band on a summer tour and he has been with the band ever since. Todd talked about the success of the new album.

Todd: “It feels just really fun fresh and exciting right now. We sort of worked on this record for two years and we did it with utmost secrecy. So it’s such a relief to be able to talk about it and I think part of the reason why it had the effect on our fanbase is because there was no information leading up to this that this was happening in any way whatsoever. So I think it took our fanbase by surprise, a delightful surprise. It also it also made for you know some difficult interviews because every interviewer asked ‘So is there anything new coming up the pipeline’ and you know we became all professional at being very vague and skirting that answer a bit.

“The record has had sort of an amazing effect on people because it has the sounds of a classic Styx record and it was recorded to analog 2 inch tape and it kind of has this warm familiar sound to it. The reception of it has really been wonderful and it’s great hearing people say that they love the experience of sitting down with an entire record and putting the headphones on and taking a 43 minute ride. It’s nice for people to rediscover that it’s not just oh I want to hear the song and we hear the song, that they could sit down and listen to an entire string of songs that worked together as a work and they can just escape for 45 minutes. It is kind of a beautiful thing I think a lot of people have forgotten that simple joy.”

The album was also pressed on vinyl which Todd says was really important to the band.

“Tommy’s been a big vinyl guy for several years now. So you know when they mastered it for buying on all the people I’ve found even down to the manufacturer they really spent a lot of attention to detail and a lot of love on the vinyl pressing. And there’s been a couple of people that have written me saying that it just leaps out of their speakers a 180 gram vinyl.”

The concept of the album began with a trip down to NASA and some timely inspiration.

“A couple of years ago we were invited out to NASA, specifically with the team of New Horizons and it just coincided that we happened to be in town and on a day off they invited us out just as it was flying by Pluto. And so we were able to see photos of Pluto before they were released to the general public. They named Pluto’s 5th moon Styx after us and then we became friends with Dr. Alan Stern and the whole team there and they’ve come out to shows and I think that was the initial seed in Tommy’s head. He happened to write a song and the phrase “Mission to Mars” kind of fell out of his mouth and it’s sort of quietly germinated from there. Tommy had gotten a lot of material together I think sort of privately before he came to us about it and then it just started building from there. To me it’s really wonderful because I can see how some people out there might think Styx is doing a concept record about space travel, like this is too delicious. They can’t wait to get to smash it and make fun of it. But once you listen to it it’s great because they’re completely disarmed. It’s it’s kind of hard it’s kind of hard to take it apart because it it’s really quite good if I may say so myself. It’s great to see people being completely taken by surprise.”

About the album having a more classic progressive sound, Todd says it was not necessarily intentional. It has to do with the players as much as the history of the band itself.

“You know it just is what it is. The fact that it sort of unfolded very organically, it just sort of ended up that way. There was no preconception of like ‘let’s you write this type of thing’ and ‘you know what would be great if we did’, it everything sort of unfolded in a very organic way. It was like seeing just a picture come into focus. I think that that that sort of vibe and that sort of honesty or whatever that’s what kind of permeates through music because it wasn’t contrived. It didn’t come about that way. It also doesn’t take itself too seriously at the same time. So it just it really has kind of just this lovely spirit about it. And people are reacting and connecting to it.

“With Lawrence and Ricky and myself we have all of our influences that we bring to the table whether you know Ricky’s playing Chris Squire or John Entwistle type thing or Lawrence doing a Tony Banks or Keith Emerson type thing just because that’s where we come from or you know a lot of the drum parts can be a splash of any color you know splash you can sort of late 70s Phil Collins or Roger Taylor and Queen. There’s all these little things, a little bit of Ringo, all these elements and all these little dashes of flavor that are not contrived. It just is what it is because this is who we are as players and that comes out and sometimes you know the things that we listen to they inform us about what is correct what are our musical choices will be. Then you have all these cooks making this stew and it’s something that has a taste that only the five of us could have done.”

As far as the band playing the new songs on tour, he says the band will continue to add more into the set when time allows.

“Right now with the summer tour with the three band bill. You know we’re we’re very limited for time. So right now we’re only doing two songs from the record and we walk on to the to the overture. As the year goes on and we get back to playing shows by ourselves we’ll be adding more songs and you know we hope that at some point we can do some shows where we’ll play the whole record in its entirety.”

As one of the great and perhaps unheralded drummers on rock music, Todd says he isn’t worried about any praise.

“You know that’s that’s really for others to decide. You know it’s I don’t do this for accolades. This to me it’s almost like a game of golf and playing against myself all the time. I want to play every night better than I played the night before. So I’m on the cover modern day this month and there’s been some you know lovely things and it’s you know like anything in art, people like it and people don’t. But that’s the way it is. If people like it that’s great.  This really was a pleasure to make. And it was great to be in an incredible studio like blackbird in Nashville you know on all vintage gear and a vintage new console and recording a two inch tape. It was a it was a great experience for us.

For more news on Styx and tour dates visit: http://styxworld.com/