Big Big Train return with an EP of 3 new songs and one live track. The EP ‘Wassail‘ is the follow up to the English Electric releases which were again released as the compilation ‘Full Power.’

The 3 tracks continue where the band left off.  The title track is a glorious expression of the band’s strong English roots not only musically but lyrically as well.  It might also be the best song written about an apple tree.  As written in the band’s press release, “Wassailing is a traditional ritual from the West of England, dating back to early-medieval times, to wake the cider apple trees and scare away evil spirits by banging pots and pans and firing a shotgun overhead, thereby protecting the harvest later in the year. Much singing and drinking takes place as part of the ceremony.”  David Longdon’s vocals are extremely powerful and the band carries the music flawlessly.

While “Wassail” is a heavier, intense track, “Lost Rivers of London” is more upbeat and shows the band’s other more poppy side.  The 3rd track, “Mudlarks,” is an instrumental that would fit on the EE albums.  Mudlarks were 19th century scavengers who eked a living from the sale of anything they could find in the mud of the River Thames at low tide.

The live track “Master James of St George” was recorded live at Real World Studios and is a more energetic version of the original which is from the album “The Underfall Yard.

The early Genesis similarities are undeniable but the band have their own unique take on that sound and have established themselves as one of the premier Prog bands around. 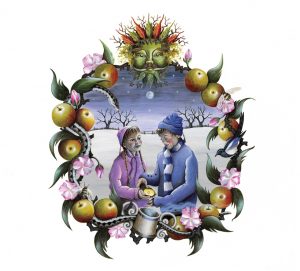