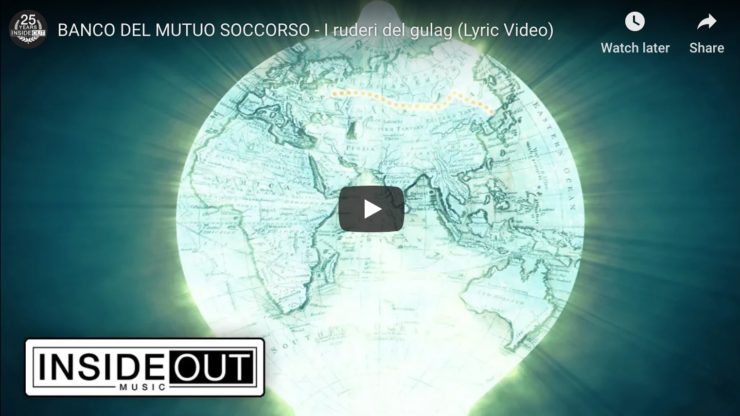 New record ‘Transiberiana’ will be the first studio album in 25 years and is scheduled to be released on April 26, 2019.

Banco del Mutuo Soccorso, the legendary Italian progressive rock band, recently announced the worldwide signing with Inside Out Music / Sony Music group. Their new record ‘Transiberiana’ will be the first studio album in 25 years and is scheduled to be released on May 10th, 2019.

Today they launch the much-anticipated first single from the album, titled ‘I ruderi del gulag’, and you can watch the video now here:

A sophisticated and conceptual piece, composed by Vittorio Nocenzi with his son Michelangelo Nocenzi. Lyrics were written by Nocenzi himself together with Paolo Logli, a writer and screenwriter very close to Banco since the 1970s.

‘I ruderi del gulag’ tells of a meeting between people who are making a journey through wonder and amazement, with the soul open to accepting diversity, and find instead a place where diversity has been repressed and persecuted as dangerous and contrary.

Of the album and signing, founding member Vittorio Nocenzi states: “I’m happy after working such a long time on this new Banco del Mutuo Soccorso album for Inside Out. It fills me with joy and satisfaction as I was truly inspired from the very beginning! For too many years, the band was only dedicated to live performances, so it was about time we would go back to composing, playing and producing new stuff! By choosing the ‘Transiberiana’ concept for this new piece of work, there are two main issues I’d like to point out: first the new Banco line up consisting of great musicians and great people, secondly, the presence of my two sons in the project: Michelangelo co-writing the album and Mario Valerio, who took care of a marketing and communication strategy related to it. These two elements have been the best gifts I could possibly imagine to receive! And this is an extra motivation if ever needed to do my best for reaching our goals.

I can only wish fans will enjoy this incredible project and look forward to see them live when we will go out to perform the album and classic Banco-tracks around the globe with Filippo Marcheggiani (lead guitar), Nicola Di Già (rhythm guitar), Fabio Moresco (drums), Marco Capozi (bass), our singer Tony D’Alessio and myself!”