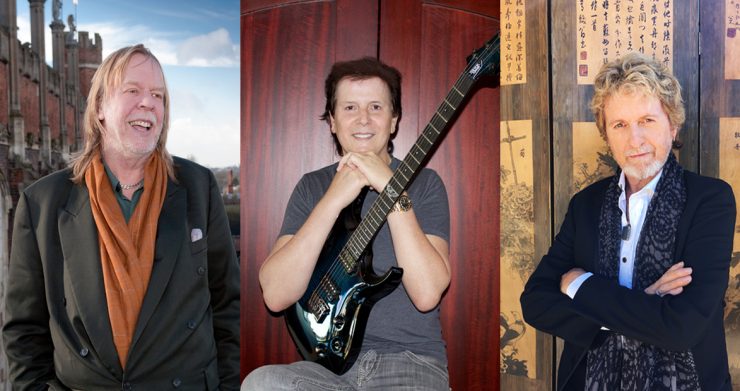 Legendary Yes alums have united and will be embarking on a world tour starting in early October.

Certainly, the most exciting news for long-time YES fans was the recent announcement that three of the group’s best known past members, singer Jon Anderson, guitarist Trevor Rabin, and keyboardist Rick Wakeman – ARW – have united and will be embarking on a world tour starting in early October (October 4th in Orlando, Florida at Hard Rock Live) running through the spring of 2017.  And now, it is time to announce who will be joining the trio for the 2016 tour:

Lee is an award winning composer and producer, as well as being an in demand session musician. As a professional bass player, Lee has recorded, toured, and performed with a diverse roster of high profile artistes, including Jeff Lynne’s ELO, Take That, Steve Hackett and Rick Wakeman. “I have played with arguably the 3 greatest bass players ever, Chris Squire, John Entwistle, and Lee Pomeroy!” says Rick Wakeman.” And I can’t wait to play with him again!”

For 20 years, Gary has been the keyboardist, guitarist, and producer for one of rock music’s most notorious acts, The Tubes. He has also toured and been a session musician for notable acts, such as Stephen Bishop and Jefferson Starship, and produced and helped in the development of many acts in the San Francisco and Los Angeles areas. Gary has composed for film and TV on projects such as, Roseanne Barr’ Saturday Night Special on the FOX Network, The Playboy Channel, and films such as, The Blob (Paramount), Under The Gun, and The Peace Effort (PBS).

All dates below are on-sale now through ARW-TOUR.COM