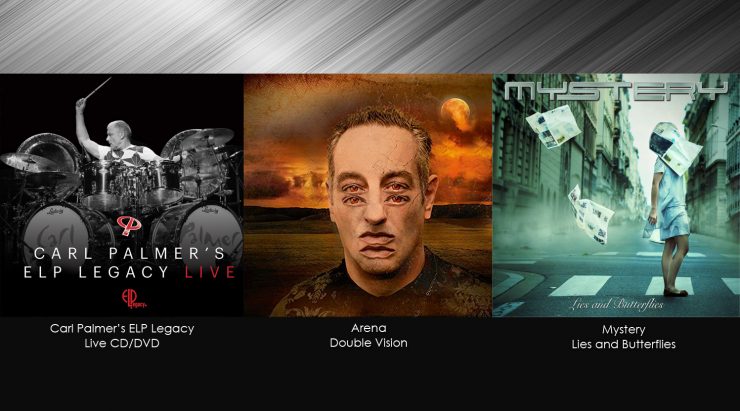 Highlighting new albums you should be aware of from Carl Palmer, Arena, and Mystery

With so many albums released each week it can happen that we might have missed providing a review on some very good albums you need to be aware of. This is the our feature Album Spotlights – highlighting some albums you might have missed. These are all albums that are already out.

Carl Palmer’s ELP Legacy Live is a 2-disc set. The CD was recorded at Buffalo’s Tralf Music Hall on November 25, 2014, and includes a full-length version of ELP’s Tarkus, while the DVD features Pictures At An Exhibition – A Tribute To Keith Emerson, which was filmed at the Olympia Theater, Miami, in 2016. The two-hour set also features special guests Steve Hackett, Mark Stein and David Frangioni and includes ELP classics including Bitches Crystal, Hoedown, Karn Evil 9 (Welcome Back My Friends), Romeo & Juliet, Fanfare For The Common Man, Jerusalem and The Barbarian. The performances are solid, however, Palmer’s song introductions in the DVD are barely audible. Guitarist Paul Bielatowicz does a superb job performing the great Keith Emerson’s keyboard parts on guitar.

Double Vision is the 9th studio album from the band in their 23 year career and it finds the band follwing a heavier path. Frost and Kino member, John Mitchell handles mixing and production duties and the results are superb and dynamic.  The opener “Zhivago Wolf” has a surprisingly memorable hook for an odd title, while “The Mirror Lies” is supercharged by Mitchell’s guitar work. Of course there is a 22 minute epic titled “The Legend of Elijah Shade” a seven part prog symphony that will mesmerize any prog fan.

Canadian prog group Mystery latest release contains 7 songs, 1 hour of new mysterious music by Michel St-Pere. The album comes a little more than 2 years after the release of the world acclaimed album Delusion Rain, and a year after the double Live album Second Home and DVD of the same name. Mystery have worked together to create an album full of emotion and moods.  Lies and Butterflies is full of the symphonic signature style Mystery have become known for with lush keyboards, extended passages, great instrumentality, and memorable melodies.