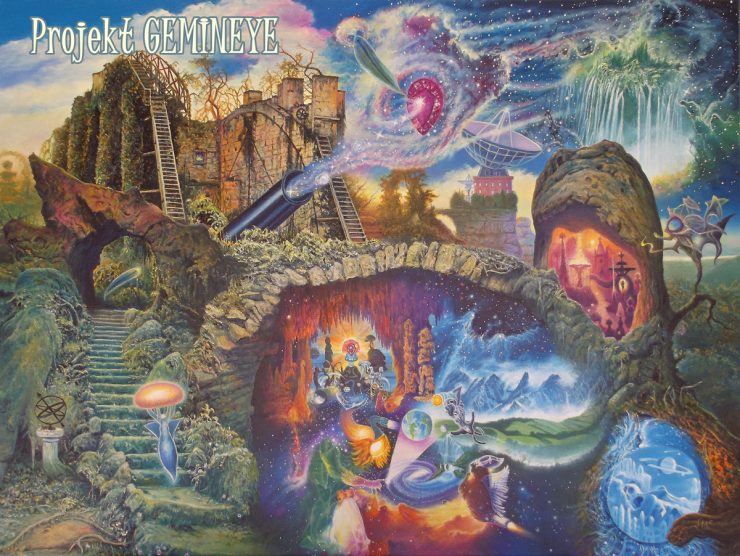 Projekt Gemineye is the recording name of Mr Mark Anthony K, who is a progressive metal/ rock musician based in Ontario, Canada.

Projekt Gemineye is the recording name of Mr Mark Anthony K, who is a progressive metal/ rock musician based in Ontario, Canada.

To date, the project has produced two albums: 2016’s “An Ordinary Day” and 2017’s “A Brand New Day”. Harking back to the days of vinyl (of which he is a huge collector!) each album is approx 40 minutes long and broadly, the style of the music would be towards the heavier side of melodic prog rock – you can find sounds reminiscent of Dream Theater or Queensryche, but of course that sort of comparison is an over simplification.

Mark’s main instrument (though he does actually play everything on both albums!) is the guitar and he has a lyrical touch combined with a heave rock style – he certainly has the chops, but these albums aren’t needless shred-fest and the playing is always appropriate and complimentary to the songs. Mark shows himself to also be a very capable drummer, bass player and even keyboardist throughout the variety of tracks and styles. The vocals on the album aren’t a LaBrie or Tate scream, but instead are more mellow, often effects treated and boosted by additional harmonies – so I would describe So vocally, the approach is more Floyd (or even Blue Oyster Cult) than Maiden!

The first album “An Ordinary Day” kicks off with the symphonic, almost cinematic title track, shifting through moods and time signatures. The track list blends the slower tracks with faster paced songs like the blistering “Fate Unknown”. The album closer, “Ride On” is one of my personal favourites, with the influence, I suspec,t of Mark’s Canadian countrymen, Rush being very strong – it’s an instrumental track, which takes a number of twists and turns before reaching its final flourish.

2017’s “A Brand New Day” is perhaps the heavier brother of the first album, and its colors are very firmly nailed to the mast in the opening track “A New Day”. Harmony guitars lead the song into the softer vocal section, with strong harmony vocals. The piano-propelled “The Long Ride” is a mid album instrumental filled with tasty and lyrical guitar playing. Mark is clearly an extremely capable player but he’s not trying to the next Vai/Satriani – the playing serves the song and it is always just enough. “Space & Time” is an almost 9 minute prog epic, with evolving time signatures, moving the track through different sections and moods. The heaviest album track is the final one – “Sell Your Soul” (knowing Mark is a big Bowie fan, see if you can spot the lyrical reference in the song’s chorus!).

So let’s find out more about Mark:

Mark: Projekt Gemineye came about while I was in hospital recovering from a broken leg. I had lots of time to think as I was there for 3 months…and the one thing I realized was that after all the time I’ve spent in bands…it was time for me to do a musical project that I had full control over.

PR: So you play everything on both of the albums – how do you approach recording as a one-man-band?

Mark: Actually that was a lot easier then I thought it was going to be. I no longer had to have other members agree with my thoughts and once I was happy with the direction…it was full stream ahead. Basically I just write the song first. .very rough form on guitar. Then I will lay down the drums. From there the rhythm guitar track go next followed by the bass guitar. Using Protools makes this process a lot easier then if it was to be done on 2″ tape.

PR: The lyrics on the album are very grounded in real life rather than fantasy – what’s your approach to song words and which comes first, the lyrics or the track?

Mark: Almost always the music comes first…the mood of the music gives me an idea of the type of lyrics the song needs. As far as lyric style…I tend to write about what I know or what I’m interested in. I try to stay away from negative topics as there is enough of that in the news on a daily basis.

PR: You are also a massive vinyl collector so probably not surprising that you are starting to issue the albums on vinyl – how did that come about?

Mark: Well that I owe to my supporters. I refuse to call them “fans” to me that sounds disrespectful. .I have a real respect for the people who buy and support Project Gemineye…so I try to give them the very best quality recordings and merchandise. So far everyone has been very happy. .and as far as the vinyl. ..it was my supporters who really wanted to have the music on vinyl. So I went ahead and did it.

PR: Finally, two albums done in two years and you are working on number three – what can we expect next from Projekt Gemineye?

Mark: The third album is already being recorded as we speak. It’s going to be called “Man of Science. .Man of Dreams”. The album cover is already complete. .done once again by very own Roger Dean..Mr. James McCarthy. Musically it’s very progressive but still keeping that heavy element.. I’m finding I was inspired by bands like Porcupine Tree and King Crimson. .along with Rush and Dream Theater. I hope to have it complete by Sept…maybe sooner.

For more info on Projekt Gemineye and to order the albums, check http://www.projektgemineye.com