You can watch the new video for “I’m Better Now” here:

‘In some ways ‘I’m Better Now’ represents the flipside of the title song from my previous album, “Flowers At The Scene”.

‘Flowers At The Scene’ focused on the repercussions of a violent crime (the impact on the victim’s family and friends), while ‘I’m Better Now’ is written from the perspective of a perpetrator of a hate crime.

For a variety of reasons, society has seemingly become increasingly polarised over the last half-decade and along with an rise in intolerance, there’s been a real sense of more and more people becoming disaffected and feeling ‘left behind’ or invisible. Sometimes, the consequences of that can be ugly.’

Peter Chilvers – who’s previously created visuals for Brian Eno – is responsible for the abstract video that superbly evokes the ominous and chilly mood of the lyric. The clip can be viewed here:

Musically, the track includes contributions from Knifeworld’s Kavus Torabi and Melanie Woods. Bowness says, ‘Kavus’s biting and twisting solo is a particular highlight of the song for me.’ 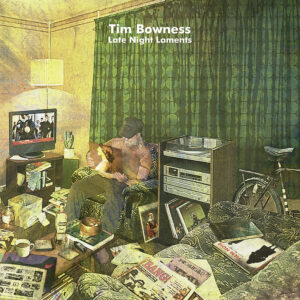