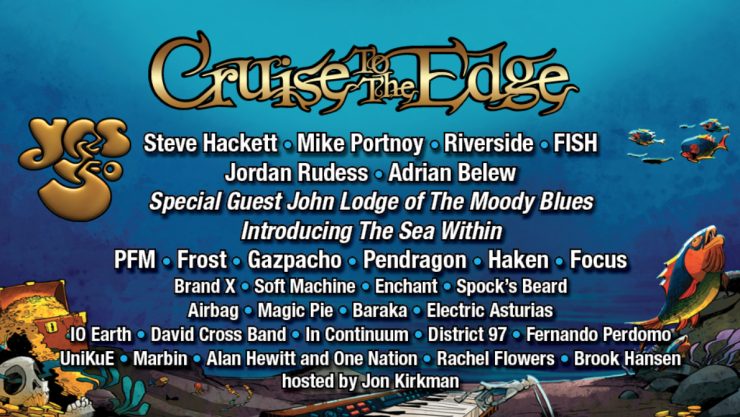 The 2019 version of Cruise to the Edge, the annual festival headlined by Yes, was recently announced with a massive and impressive lineup.  More than a month since the initial announcement comes word that more acts have been added.  Leading the way is the new supergroup featuring Roine Stolt, Jonas Reingold, Marco Minnemann, Daniel Gildenlöw, Tom Brislin, and Casey McPherson. Joining the cruise as well are cruise veterans like Focus, Adrian Belew, Haken, along with guitarist Fernando Perdomo, Rachel Flowers, and Brook Hansen.

Yes returns as the main headliner along with the incredible Steve Hackett. Mike Portnoy is set to return next year, but is listed as only Mike Portnoy with word as to what he will be performing or with who. Also appearing as a solo act is Portnoy’s former Dream Theater bandmate Jordan Rudess. Other returning acts include PFM, who make there return after being missed the last 2 trips, along with Frost, Airbag, and John Lodge. Among the acts making their debut on Cruise to the Edge are Riverside and Gazpacho. The cruise will also mark the debut of Dave Kerzner’s new group, In Continuum.

For more information and to book a cabin visit cruisetotheedge.