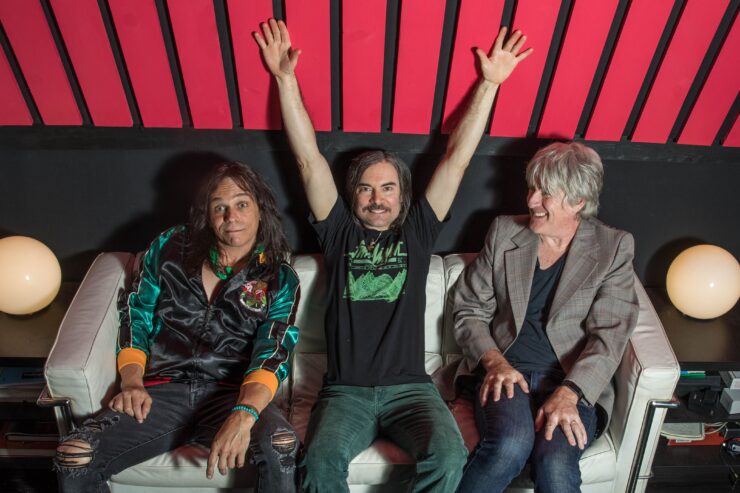 Roger Joseph Manning Jr., Tim Smith, and Eric Dover formerly of Jellyfish reunite on the EP, out May 15th.

TPR – How did the three of you get together. Who who made the first phone call?

Tim – Well, Roger Manning called me in January 2017. I think he had heard a song that the three of us had worked on another band of mine called the Umajets from years ago. It came up on the playlist he was listening to and I guess he got the hankering to call me. So he called and said, hey, what’s going on? How you been? You know, we’ve run across each other socially over the years and being in bands we’ve been touring with and stuff might run across each other, but hadn’t really done anything together in a while. And so he said, “well, why don’t you come out? And I said, “let’s get Eric involved and just see what happens, just get together and play and see what kind of song, ideas might come of that.” That started soon after that January, maybe March or April of 2017. I guess over the course of a few visits with writing songs, we started to realize that there was something here, some music that we were all excited about and continuing on. And so that’s how it started.

TPR – Where did the song “Fadoodle” come from? (new lyric video here)

Tim – It was a song that Roger had for a while, apparently. And yeah, it was one of the things he brought in and I think, well, you know, as you do when you’re before you have any lyrics, you just kind of sing gibberish kind of things and it stayed in gibberish mode for a while. And suddenly Eric showed up with the completed lyric. It was just insane and fabulous and we were so excited about it.

Eric – It really allowed me to indulge my six year old, you know, potty humor mind and so I was thankful about that. I always welcome that opportunity.

TPR – You guys released the first single a few weeks ago called Lighthouse Spaceship, which is the final track on the EP. Who wrote that one? 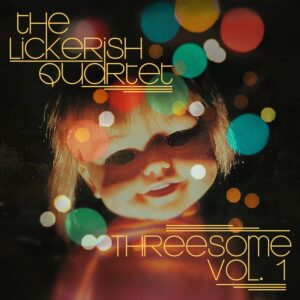 Tim – The lyric was written by by Eric and it was a beautiful idea that I think Roger might have even had when Imperial Drag was still doing stuff, it might have come from, a kernel of that might have been in that area. But we ended up finishing it often and adding the whole ending thing that’s almost as long as the first half of the song. It does incorporate a lot of elements that we like to do with things that are not easy to do so once we got it all together and realized it was a six and a half minute song, we just were like well, so what, we really like how it turned out. But Eric, once again, you know, saw into his crystal ball and realized that the world was gonna be in such a weird place right now, because a lot of the lyrics in that song as we put it out, people have come to us and said, “man, what a great thought it is for us when we listen to that song and hear those lyrics,”. It’s been really helpful to a lot of people, which was, you know, obviously not our intention, but it’s turned out to be something like that for some folks. So that’s been cool.

TPR – Has it been surprising to you to be covered in all these prog rock kind of Web sites and outlets like Prog magazine and The Prog Report?

Eric – I think it’s flattering and wonderful that people dig our music. I don’t consider us a prog band by any stretch. And I’m not even quite sure what the genre means in 2020. For me at least, prog comes from a lot of different places too. It’s also ironic because we’ve got we’ve got Jeremy Stacey who played drums on this record. He’s in King Crimson.

TPR – Was there any discussion about calling this group Jellyfish and reviving that name and was there any talk about trying to reach out to Andy Sturmer?

Tim – No, we never discussed calling it Jellyfish. Obviously, the three of us have been in Jellyfish together, but it’s clearly Jellyfish was a band that was based around Roger and Andy Sturmer And this was not ever going to be that. And that just was never going to be the case. Andy’s never really reached out to any of us. He’s much happier in a life that he does in the scenes with music and music production. And frankly, it was just it was an opportunity for the three of us who spent some time touring together but never got to be creative together in Jellyfish, and that’s fine, it’s just the way it was; this was gonna be something that we were doing for ourselves, for the three of us. And of course, the things that we talk about and what Jellyfish is about because Roger was there, the sensibilities will always pop up. But that was never the intention. A lot of fans that wish jellyfish had gotten back together or wonder what happened to Andy Sturmer. We can’t really answer these questions. I’m just trying to stay true to the music that we’ve loved and had so much fun making these songs and recording them. And we just can’t really think any more about it than that.

TPR – Is there more music planned? Are there plans to release more stuff soon?

Eric – Well, there’s a master plan for everything, of course. And this is no exception. So we’re going to have three EPs of four songs a piece released over the next year or so. And, you know, we’ll just see how things take us. We decided to release it a few songs at a time like this just to give everybody a chance to get into that material and then, you know, give the next sequence, as it were.

TPR- You both always busy with a lot of stuff and and have other other things going on outside of outside of this group? Tim, what else do you have going on right now?

Tim – I’ve really gotten into baking bread since I’ve had to be home so much.

Eric – I’ve gotta get that recipe by the way.

Tim – Yeah, but not nothing else on my radar at the moment, so we’re focusing on this.