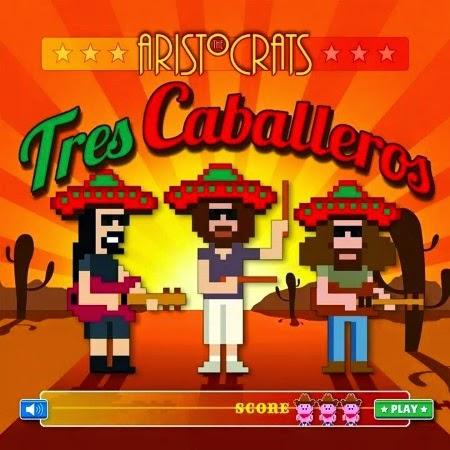 Cd Review of The Aristocrats new album “Tres Caballeros” out on June 23rd, 2015.

The Aristocrats, one of the most eclectic and fun instrumental groups around, are back from constant touring with a new album entitled “Tres Caballeros.”  The album was tracked over ten days in February at world-famous Sunset Sound studios, where Van Halen (1), Led Zeppelin IV, and Rage Against The Machine’s The Battle Of Los Angeles were tracked, among hundreds of others.  The album is their most impressive to date with a collection of 9 songs, each with a distinct style and memorable performances throughout.  The band shift from Rock to Jazz to Surf rock to Country and Jam with ease and they pull them all off with perfection.

The album opens with the rocker “Stupid 7” which is along the lines with what we have come to know from this power trio.  The track is fast paced and the three musicians are completely in sync here with Guthrie showcasing his unique guitar style while Marco plays practically each piece of drums at the same time.  Bryan Bellar carries the rhythm as if he is playing both bass and rhythm guitar and finds his moments to shine here as well.

The second track “Jack’s Back” is where the bands combines their sense of humor with they improvisational brand of playing.  It is hard to know which parts are rehearsed or done out of jamming.  “Texas Crazypants” is a blues rocker while, conversely, the song “ZZ Top” has a progressive element to it, beginning with the band counting off its odd time signature before jumping into a track that sounds more like Rush than ZZ Top.

Every song that follows presents a different style, whether it’s the Jazzy “Pig’s Day Off” or the surf rocker “Smuggler’s Corridor,” which could be on the Pulp Fiction soundtrack, or even the Country vibe of “Kentucky Meat Shower.”  One has to wonder where that title came from.

The album’s closer is possibly the best track and not only because it is 11-plus minutes.  “Through the Flower” is powerful and emotive and more than just the band showing off.  Guthrie’s tone here is reminiscent of Eric Johnson’s “Cliffs of Dover.”  There are some amazing passages here and the closing of the song builds and builds until fading away appropriately leaving the listener ultimately satisfied.

There are no throw away tracks, no over playing or useless parts here.  This sounds like the album the band has been trying to make all along.  There is no trio in music today that is this diverse and so skilled at what they do. Check this one out and enjoy.