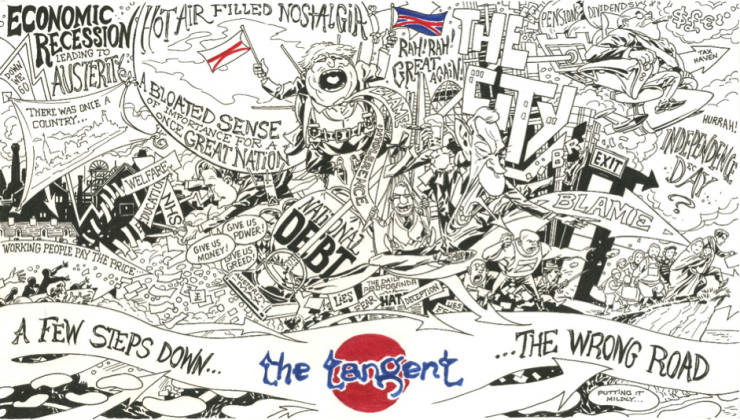 The new song from Andy Tillison and The Tangent on the political climate in England.

The Tangent have returned, following band leader Andy Tillison’s heart attack last year and subsequent recuperation. Never one to shy away from confronting issues head on, Andy has enlisted his band-mates in The Tangent including Luke Machin, Jonas Reingold & Theo Travis, to create one 20-minute long piece titled ‘A Few Steps Down The Wrong Road’ which you can hear now here:

The track sees The Tangent joined by author, playwright & former Chumbawamba member Boff Whalley, for what is a preface to a new album that finds the band focussing on politics and the practice of mass migrations in the contemporary world. Andy Tillison had this to say:

“Inevitably, after a very upbeat and nostalgic album that revisited our early career with “A Spark In the Aether”, I wanted to turn my head again towards the more socially aware music that I have written since I was a teenager. The idea has been building with me for some time, and now it’s time for me to get on with it. In the light of the UK’s decision to leave the EU, a political framework where the Tangent flourished as an international positive idea, it’s obvious that I want to say something about that. I’ve never been good at political debate, but in song I find my courage and I’m not letting this pass me by.”

The track, and the forthcoming album, is accompanied by artwork created by UK comic artist Mark “Bucky” Buckingham, whose images have graced comics for both DC and Marvel. You can see some of the early work he has done for The Tangent above.

Andy continues: “We in the west decimated the lives of so many in other parts of the world – in generations gone by and right up to this moment. We’re doing it now. The Chilcott report on the Iraq War identifies this frequently occurring British/American behaviour and attributes much of the desperate actions of people to that very behaviour pattern. When people travel to escape the chaos in which we had a hand either by political interference or by selling their Warlord governments weapons, they follow the trails WE left for them. We should not be surprised or indignant that they are coming. We left the invitations open when we left those people destitute once before. They will continue to come. Being ready for this is not about building walls to stop them. It’s always been about making good for the past. Whether we can – in our current “economic state” – handle this is really a question as simple as this….

If there was a Tsunami that destroyed half of Southend On Sea, would they build a wall around Basildon to stop the resulting refugees?

Your answer to that question is what England (and I mean England) IS. Or perhaps your answer is what it COULD be. We could make it better. Economics is a consideration, not another brick wall.

Tangent means Tangent. Go off on one. Think again.”