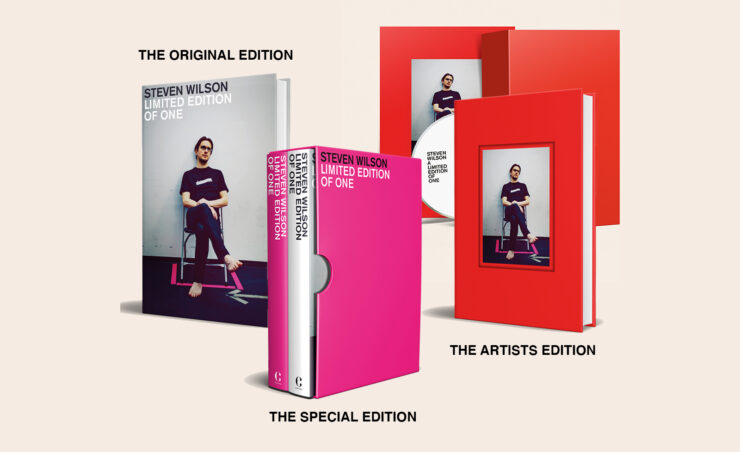 Steven Wilson’s new book Limited Edition of One is out on April 7th, 2022.

Steven Wilson has released the details on his long-awaited autobiography titled Limited Edition of One: How to Succeed in the Music Industry Without Being Part of the Mainstream. The book comes in standard, Special Edition and Artists Edition formats. The book is out on April 7th, 2022 and can be ordered here:

Part the long-awaited memoir of Steven Wilson: whose celebrated band Porcupine Tree began as teenage fiction before unintentionally evolving into a reality that encompassed Grammy-nominated records and sold-out shows around the world, before he set out for an even more successful solo career.

Part the story of a twenty-first century artist who achieved chart-topping mainstream success without ever becoming part of the mainstream. From Abba to Stockhausen, via a collection of conversations and thought pieces on the art of listening, the rules of collaboration, lists of lists, personal stories, professional adventurism (including food, film, TV, modern art), old school rock stardom, how to negotiate an obsessive fanbase and survive on social media, and dream-fever storytelling.

Steven Wilson says this about the book:

“The book was written under a “no rules” philosophy with the collaboration of legendary rock biographer Mick Wall. In addition to containing autobiographical material, it has a lot on my broader ideas about music, as well as list and discussion chapters on the kind of things I get asked about a lot (favourite films, songs, record shops…etc), and some that I don’t. Also among its pages are photos from my personal archives, and a short story (which might be my favourite part). I’ve chosen to focus on the stuff that people really don’t know about me, rather than what is well known and documented by now. The tongue-in-cheek subtitle ‘How to Succeed in the Music Industry Without Being Part of the Mainstream’ perhaps tells you more about what to expect.

“The limited deluxe version features a second volume of supplementary material and photos, plus a CD with “audio illustrations” of some of the things I talk about in the book, including mercifully brief extracts of my school bands, early attempts at electronic music, and unreleased demos from the beginnings of No-Man and Porcupine Tree among others. Although some of its musical merits might be debatable, my intention is to put you there in the room when I’m talking about these early musical endeavours.Finally the super deluxe “artist edition” comes in special packaging and also includes a sheet of handwritten lyrics.”