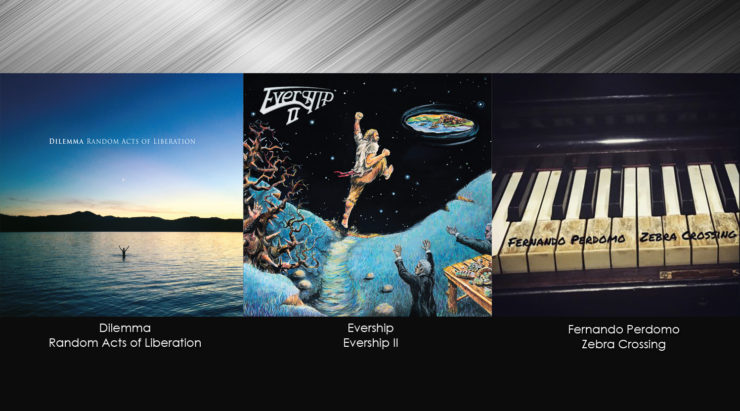 New releases we recommend from Dilemma, Evership, and Fernando Perdomo.

Last seen in 2012 before disappearing, Dutch/British group Dilemma return with a new album Random Acts Of Liberation, mixed by Rich Mouser (Spock’s Beard, Transatlantic, Neal Morse). The band consists of founder and keyboardist Robin Z and drummer Collin Leijenaar (Kayak, Neal Morse, Dave Bainbridge, Affector), as well as British guitarist/vocalist/front man Declan ‘Dec’ Burke (Frost*, Audioplastik, Darwin’s Radio), guitarist Paul Crezee and bass player Erik van der Vlis. The album as heralded by Mike Portnoy as one of his favorites of the year and we agree. The album is a mix of genres from the hard-hitting prog metal of the opening track “The Space Between the Waves” to the 80s rock of “All That Matters” and much more. And of course, there is a long epic in the 12 minute track “The Inner Darkness.” At 72 minutes, there is enough here to keep any prog fan plenty busy.

Nashville-based Melodic Progressive Rock band Evership is the conceptualization of composer, multi-instrumentalist and producer/engineer Shane Atkinson. The eponymous debut album Evership (CD and Digital) was released in 2016. Evership II is a continuation of what the debut album started. With only 5 songs, Evership II is a true progressive rock magnum opus culminating in the 28 minute epic “Isle of the Broken Tree.” Atkinson throws everything imaginable into this album from the sinister groove of “The Serious Room” to the bombastic madness of “Monomyth,” another lengthy track. The group continues to build its audience on word of mouth and rare but powerful performances.

This amazing multi-instrumentalist/lead guitarist is well-known in prog circles for his work with Dave Kerzner, with whom he has performed for the last few years. He also has released a number of solo albums, including earlier this year an excellent prog instrumental album called ‘Out to Sea.’ With his second album this year, Zebra Crossing, Perdomo explores his love of bands like The Beatles and The Beach Boys with a heavily pop-influenced album. Songs like “Sometimes I Feel Like Nothing At All” sound like classic Brian Wilson with all of the necessary production elements. Meanwhile, “We Were Raised With Headphones On” recalls John Lennon from his solo period. While not a traditional prog album, there are plenty of great melodies and songs on this collection that will appeal to a prog fan that appreciates those classic pop groups.