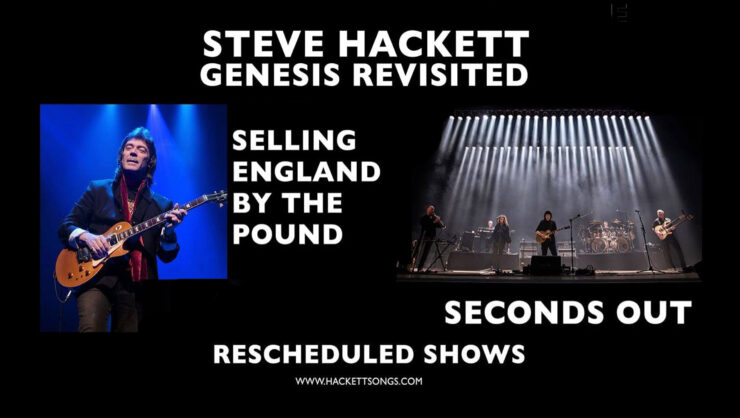 More dates for the main Seconds Out + More USA & Canada Tour 2022 will be announced very soon!

Steve and band would have loved to return to the USA this Spring but unfortunately that won’t be possible.
The good news is that all the shows that had to be postponed due to Covid19 have now been rescheduled for Spring 2022 AND to thank fans for their patience those shows (and ONLY those 8 cities) will feature a very special setlist including Selling England By The Pound in its entirety PLUS the classic Genesis live album – Seconds Out!

Current tickets are valid for the new shows and your seat allocation will be the same… and if you don’t already have tickets get them now before the shows are all sold out!

Seconds Out was the hugely successful double album recorded on Genesis’ 1977 concert tour together with The Cinema Show, from their 1976 tour, and featured Steve Hackett on guitar alongside Mike Rutherford, Tony Banks and Phil Collins who had taken on the role of vocalist following the departure of Peter Gabriel. The tour included music from each of the six studio albums from Steve’s time in Genesis and marked his final recordings with the band as he left to pursue his solo career upon its completion.