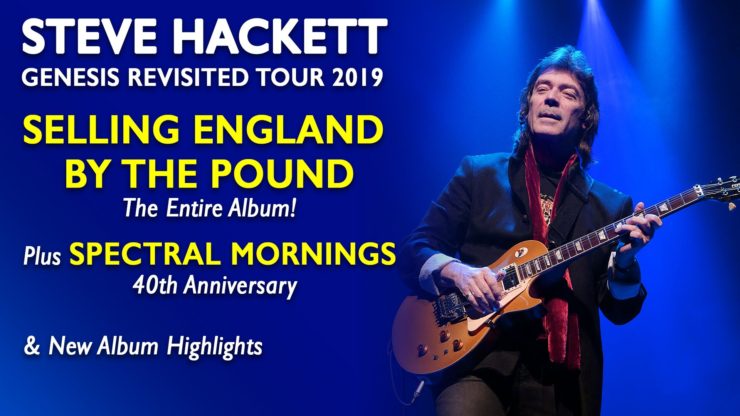 Setting off September 12th, 2019, Steve and his band will perform 27 shows in the U.S and Canada.

The irrepressible former Genesis guitarist Steve Hackett announces his 2019 European Tour. Setting off September 12th, 2019, Steve and his band will perform 27 shows in the U.S and Canada.

For the first time ever, Steve will perform the seminal Genesis album Selling England By The Pound in its entirety. Released in 1973, the album went to No. 3 in the UK charts and has been described as ‘the definitive Genesis album.’ It includes fan favorites such as Dancing with the Moonlit Knight, Firth of Fifth, Cinema Show and, of course, I Know What I Like (In Your Wardrobe). Other favorite classic Genesis tracks will also feature in the show.

2019 also marks the 40th anniversary of one of Steve’s most popular solo albums Spectral Mornings and Steve will rightly celebrate this milestone by performing masterpieces from the album.

Fans will also be treated to highlights from Steve’s new album At the Edge of Light, released on Friday,January 25th, 2019.

Steve explains, “I’m thrilled to be performing the whole of my favourite Genesis album, SELLING ENGLAND BY THE POUND, which caught the attention of John Lennon in 1973. I felt that I was now playing guitar in the world’s best band, and everything was opening up for us… Also I look forward to playing all the favorite songs from SPECTRAL MORNINGS, marking its anniversary, plus new album tasters, as well as additional Genesis gems in a terrific grand slam!”

Canada and U.S Tour dates are as follows:

Joining Steve on the tour are his regular musicians Roger King (keyboards), Jonas Reingold (bass), Rob Townsend (saxes/flutes) with Nad Sylvan on vocals. Craig Blundell (Steven Wilson, King Crimson, Iron Maiden) will be on drums & percussion – he was voted by Modern Drummer and Rhythm Magazine readers as one of the top progressive and forward thinking drummers in the world.