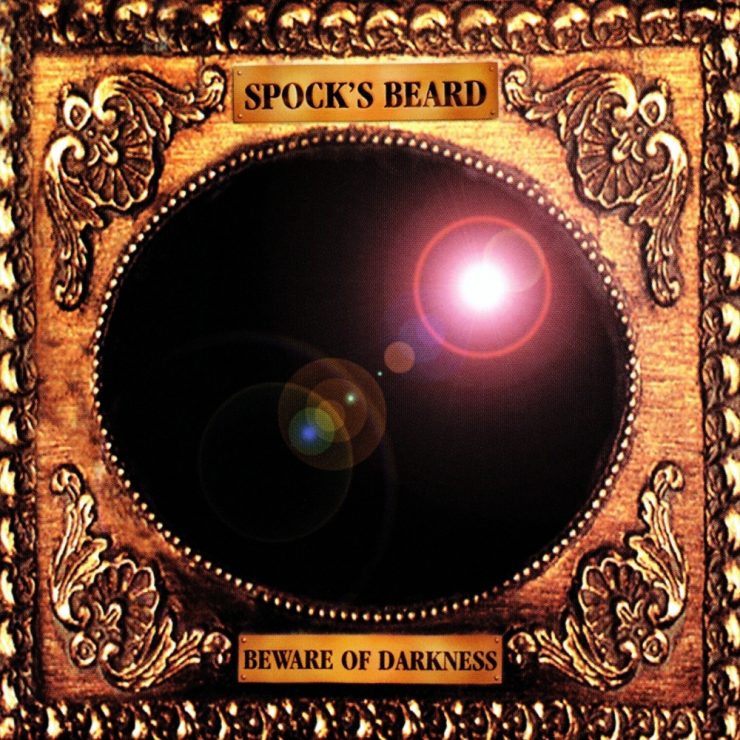 Having made a splash in the Prog world with their first album, The Light, in 1995, Spock’s Beard, now complete with a full five person lineup, went straight to work on their sophomore record, Beware of Darkness. While much of the first album happened by accident, turning demos Neal Morse had written into an album while recruiting a band, this time the band went into the studio having to figure out how to make an album as a group. This is the album where the trademarks of the group would rise to the forefront, with tracks like “Thoughts”, a nod to 70s Prog icons Gentle Giant, “Waste Away” an acoustic rocker, and “Walking on the Wind” the Neal Morse signature epic.

Bassist Dave Meros recognized the different vibe going into the making of the album, “We considered ourselves an official band by this point. The Light was done almost entirely as an experiment, but now we actually saw some possibility of a future. Neal was on fire creatively and I can still feel the excitement that we had going into that album. At the time that I joined the band we were just a four piece. Neal had recorded all the keyboard parts on The Light by himself. But after The Light was recorded we wanted to start doing some gigs and Neal realized he couldn’t cover it all by himself, so Ryo was brought back in. So it really was a complete band then in a physical sense. But beyond that, this was going to be our second album, we had done some live shows as a full band, there was a bit of a buzz going on, we had a new recording contract, and there was definitely a feeling that Beware Of Darkness was our first focused push forward.”

The band would sign with Progressive label InsideOut and finally had a recording budget. This drove them to seek out Kevin Gilbert, as Neal Morse recalls, “Nick had made this connection with Kevin Gilbert. I remember him really setting out to do that. He went up and jammed with him at some ski area or something and we wanted to get to know Kevin so we wound up having Kevin mix some of the songs on Beware of Darkness. We couldn’t afford to have him do the whole thing because he was expensive for us in those days. He mixed “Thoughts”, “Walking on the Wind” and “Time Has Come”. I had flown out back out there to remix some other stuff with Kevin and that was when he was found dead in his studio.”

The album opens with the title track, which is actually a cover of a George Harrison song, but it was not that original version that drove Neal to decide to cover the song. “I’d always really liked Leon Russell’s version of that song and he does these kind of piano jam things before he goes into the song. If you’ve ever heard his version it’s different from George Harrison’s version and one day while I was in the shower I started thinking about a Prog version of that song and taking some of Leon’s keyboard riffs and kind of you know making them into full band things which is where the intro thing comes from that. And yeah I don’t know if this all began to play in my mind that day and so I demoed that and we decided to do it.”

One of the signature songs for the group is “Thoughts” which showcases the band’s knack for wild harmonies and odd time signatures, which they claim are simply from their love of Gentle Giant. Over the years, these vocal arrangements would appear either as parts of longer epics or future versions of the song such as “Thoughts part II” and “Thoughts Part 5”. Dave Meros, explains, “As far as difficulty, I think it sounds more difficult than it really is. Each individual part is no harder to play than any of the other Spock’s Beard material of the time, but the arrangement is so quirky that when it’s all put together it sounds really complex. We actually didn’t feel like we were establishing a sound, it felt more like we stumbled upon the Gentle Giant sound. That song is very obviously inspired by Gentle Giant. I think it’s funny now whenever I hear somebody hearing a quirky counterpoint vocal and they say it sounds like Spock’s Beard, when in reality we were just trying to sound like Gentle Giant.”

Other instrumentation was brought to the forefront on songs like “The Doorway” which is a long piano driven rocker, harkening back to songs like Genesis’ “Firth of Fifth”. “Waster Away”, rather, is a regular 5-minute acoustic rock song, allowing Neal to sing lines like, “Some people are like gravy, spilled on God’s Sunday shirt”. Meanwhile, the standout track is “Walking on the Wind” that has the spastic interplay with keyboards as the main opening section and closes with an epic guitar solo refrain, another Neal Morse calling card.

Beware of Darkness is in many ways just as important an album as The Light. While its predecessor opened the door, this album kicked it wide open, exposing all of what this band was capable of and setting them up for a long career.