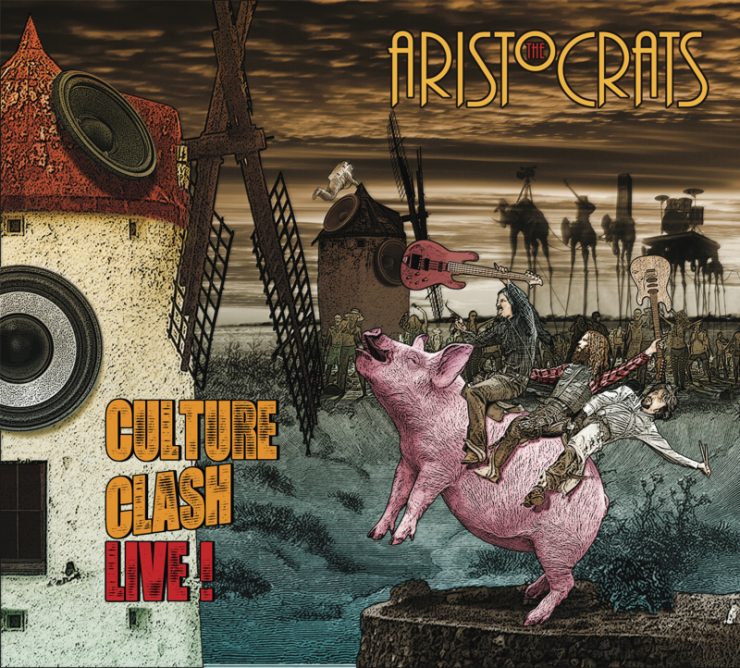 Review of The Aristocrats – Culture Clash Live CD/DVD set out on January 20th, 2014.

With all the great musicians and playing that exists today, it is hard to get overly impressed often, but that is certainly not the case with the trio known as The Aristocrats.  Never ones to take themselves too seriously, the group are all at the top of the list when it comes to their instrument and they do not disappoint with their latest live set, a CD/DVD collection from their last tour in 2014.  Compiled over a few different shows from their world tour, the performances here bring more life to the songs than the studio versions.  If you still have not heard this band, this is the perfect way to get introduced.

Each of these musicians are so respected that they are in many bands with the biggest names in music,  Guitarist Guthrie Govan has been with Steven Wilson for a few years and is again on his upcoming album, as is drummer Marco Minnemann.  Marco has also been on tour with Joe Satriani, as has bassist Bryan Beller.  These guys are the real deal.  Guthrie and Bryan are two of the best at what they do but Marco is the real rock star of the group, making his drumming as wild a spectacle as that of a lead singer of an arena rock band.   His drum solos are funny, challenging and entertaining all at once.

The setlists for the CD and DVD differ slightly.  The main highlights are the tracks “Sweaty Knockers” and “Get It Like That” off their debut album, and “Ohhhh Noooo” and “Culture Clash” from their latest of the same name.  Each song offers each musician a chance to sign.  The songs are memorable and vary in styles from the groovy feel of “Ohhh Nooo” to the bluegrass of “Louisiana Stomp” and the heavier “Living the Dream.”  While Bryan is the main spokesman for the group live, they all introduce a few of the songs.   On the DVD the guys each share stories about how the songs were created or how a title like “Gaping head Wound” comes to be (spoiler alert: it does involve a gaping head wound).

It would be hard to imagine a trio more talented.  Seeing them in person live is one of the best live concert experiences you can have, but if you missed the tour, this set is more than worth it.