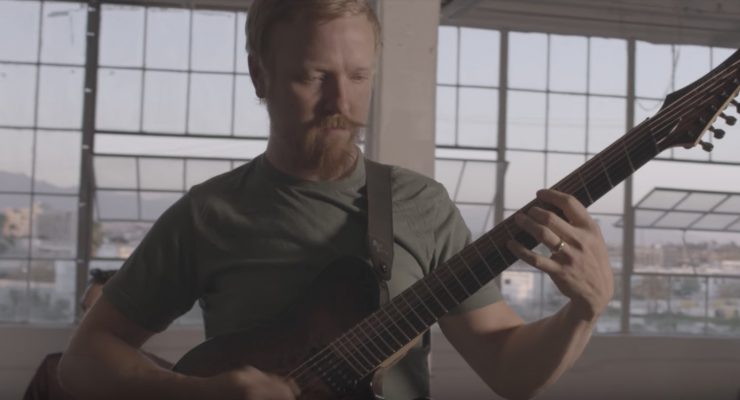 Scale the Summit just released their latest album, ‘In A World of Fear’.  Lead guitarist and songwriter shook things up for this release with new members, guests and more detailed approach to the writing and recording.  We asked him a few questions about this great new album.

What was different in creating the music for the album this time around?

Chris Letchford: I changed up a little bit of the process but for the most part its remained the same. I always write the entire albums start finish for all the guitars and the organization of the songs structure… only this time I handled tracking all the guitars myself and doing a lot more pre-production stuff with programming all the drums and bass to get a better idea of how the final version would sound. This time I also was able to spend a lot more time with the compositions, like adding dozens of different types of layers of new sounds, synths that I made, etc… I feel like it made it the most “complete” sounding Scale The Summit record to date. This was also the first STS album that I recorded all the parts while I wrote them. Before I would write all the songs and just put it all into Guitar Pro so I wouldn’t forget the songs… and then it was enter the studio and rush rush rush to get it all tracked in time. It was nice doing all the guitars myself this time and being able to spend a lot more time getting the perfect takes.

Then after I was 90% finished with the record I sent all the drum parts I had written to Charlie and had him learn and spice up the sections, and finish parts that I had literally no ideas for. We ended up changing a lot of the drum parts since Im limited on the types of drum parts I can write because Im no drummer haha. That part was smooth sailing as well, Charlie and I were definitely on the same page throughout all of that. Then we went to Anup Sastry’s studio and had him track, engineer, and mix the drums with Charlie and I. That was the most chill and least stressful drum session in the history of the band, and that was even with me getting super sick while I was there!

While we were tracking drums, Kilian was in Boston tracking the bass. Same situation here as well. I sent him all the bass I had written and then he finished up the rest that I didn’t really have ideas for. We went with a more rhythm section type of bass style for this album, helps the music to sound heavier and groove a lot more.

Then once that was all done, we re-amped a lot of the guitars at Mystery Ton Studios in Maryland, mostly for the clean guitars and then I flew home and re-amped the rest of the record myself for all the distortion, spacey effects, and all leads.

Then I compiled all the guitars, mixed all the effects how I wanted them for the synths and layers (imagine 10 layers and trying to explain that over the phone or via email, we did not even bother trying haha) and sent it back to Anup and he mixed the entire record. It was the smoothest STS recording ever and a lot fun.

Where does the inspiration for the songs and the titles come from?

Chris Letchford: With song writing in general I just sit down and do it (knock on wood!). Its always something that always came really natural to me. If I needed to get to work on writing another album I would just sit down and do it until the ideas stopped coming and then I would break until the next day. Usually just really nice weather outside gets me in the mood to write music. Of course I listen and love a bunch of bands and artists, but its really a lot of music that is way outside of the genre of music I play that I listen to. I wouldn’t really say they do or don’t inspire me to write music. With titles, once the song is complete I sit back and listen to them until i visualize something or get a certain emotion for them. Couple of the tracks titles I came up with while I was recording them.

Where does the album title ‘In a World of Fear’ come from?

Chris Letchford: I just sat back and listened to the record during its pre production period and overall thought that it sounded very dark and I had that title as a working title and decided that it fit really well. We do live in an age that is completely fear based and I feel its only getting worse the more and more people get so sensitive and opinionated over minor things. Its a lot of complaining and whining instead of getting out there and making things change. Sharing things on social media is not going change anything, it will take physical bodies out there marching to really make a difference. Social media is a nice tool to help organize these things, but asking for people to “like” a post to help, does nothing.

There are a number of guests on the album. How was it working with so many new great musicians on this album?

Chris Letchford: It was smooth sailing and an honor to have them all on this album! I just hit them up and sent them the section I felt fit their styles and told them to play whatever they wanted. I had a huge list of players that I really loved and didn’t even get to write everyone on that list. I was expecting at least half of the players that I wrote to not be able to do it or not be interested but literally everyone except one person was super excited to be involved. They all did amazing, above and beyond what I had hoped for.

How many ideas do you come up with that do not end up becoming songs?

Chris Letchford: I usually write a riff or solo or something and use it as a starting point. I don’t like to take 10 pieces I have sitting around and try to piece them together randomly and force it to work. I just pick one riff or section and build off of it until its a complete song. Its a strange thing too with writing. I have riffs that I write and then I play them to death to point where I don’t even know if they are good anymore haha. So I usually will take a break for a couple days and come back to it, but there is definitely a lot of material that I have just deleted and will never use. Im sure literally every artist, musician or producer can relate to that.

How do you think you’ve evolved as a writer since the debut album?

Chris Letchford: I feel like Im finally writing the music that I always wanted to write. I think its a natural evolution though. When the band first started the music was just super busy and thats what the band members and myself liked that the time. I feel like its more of a maturing process. As each album came out I wanted to start moving more and more into writing more accessible songs but still keeping the very technical approach without it sounding technical just to be technical. I feel this album has finally accomplished that, though its subjective haha. For musicians we hear this style of music differently from the general public that just listens to straight forward rock and roll that you hear on the radio. For myself and fans of STS we can comprehend whats happening, but to the average listener its just noise.