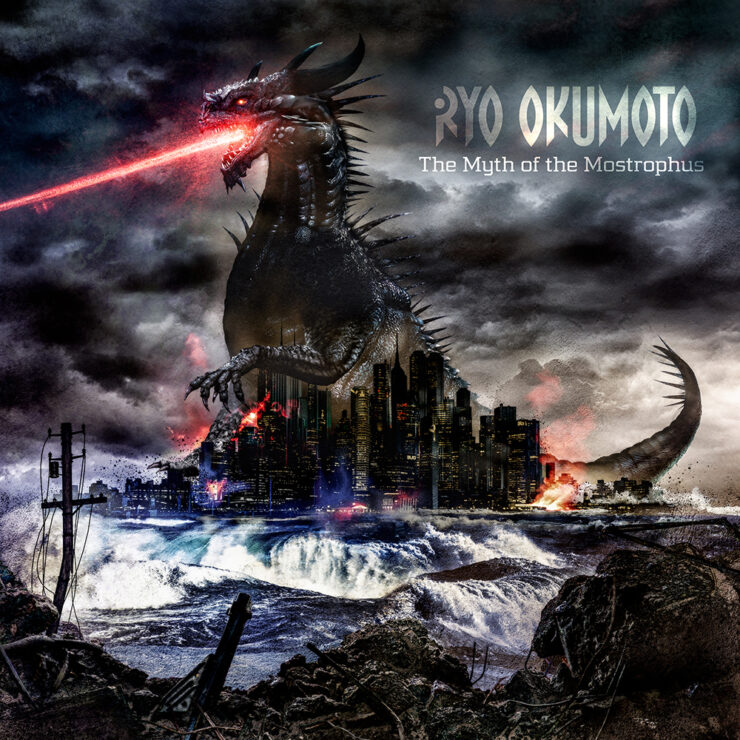 Collaboration has become the order of the day in music, from both the artistic and business perspectives. This is especially so in Prog, where the organogram on any particular project might look like a singularly clannish family tree. While this is particularly so in respect of solo releases, Ryo Okumoto’s new solo album, ‘The Myth of the Mostrophus’, takes the approach to another level. Most reviews of this album are likely to start or end with the observation that ‘RYO IS ROCK ‘N ROLL!’ Well, he certainly is that, but the Spock’s Beard keyboardist is also much more. He may now be described as ‘Convener of the Prog Stars’ or perhaps even ‘the CEO of Prog’. Consider for a moment this list of personnel:

Talk about an all-star cast. Okumoto moves in the most august of Prog circles, and that fact allows him to call on a veritable ‘who’s who’ of almost two dozen revered musicians to deliver his first solo album in 20 years. These artists are on the clock delivering numerous and sometimes multiple performances at various points during this album, and deliver they most certainly do. ‘The Myth of the Mostrophus’ is an album that oozes with collaboration and co-operation. It almost feels like the year-end party for Progressive Rock Incorporated, only with a Directorate of 23 movers and shakers, all at the top of their game.

Comprising six songs (with two bonus tracks on the Japanese edition), the album is, at least partially, intended to fill the gap left by Spock’s Beard’s recent studio silence, but with a twist: all the tracks were co-composed by Okumoto and ‘I Am the Manic Whale’ front-man Michael Whiteman. ‘Spock’s Goes Manic’, you might say. There is a clear connection between this album and what might otherwise have been Spock’s Beard’s fourteenth studio album. The performers include almost every alumnus of Spock’s Beard (with one notable and obvious exception), and other players clearly selected not only for their talent, but also for the individual idiosyncracies and personality that they bring to each track.

Clearly missing his day-job, Okumoto is obviously not intent on allowing the Beard’s legacy to lag. The result is two songs that definitely and directly fill the Spock’s Beard void, and four that maintain the flavor of the Beard but also venture somewhat into other territories.

First song ‘Mirror Mirror’ is named, not coincidentally, after the Star Trek episode in which Mr Spock grows a beard. (I am sure that by now you are getting the picture.) It is a grand ten-minute statement, peppered with familiar grand Beard vocal lines and guitar/keyboard harmony runs, as well as the requisite huge Alan Morse lead guitar climax. Vocals and drums are delivered by Nick D’Virgilio, and both his performances will bring a pleasing sense of familiarity to fans of Spock’s Beard Mark II. Okumoto’s talented wife Keiko provides backing vocals together with Michael Whiteman and Kevin Krohn. ‘One man cannot change the galaxy, but one man could maybe be the change… in a world of tyranny… one man to take the lead’ soar the lyrics in the drummer’s fine voice. Well, Ryo Okumoto certainly is trying to direct and make changes in this particular musical boardroom. A great start in an avowedly Spock Beard vein.

Second song ‘Turning Point’ starts with a complex and excellent drum intro from Okumoto’s new friend and ProgJect band-mate, Jonathan Mover. With Michael Sadler’s familiar voice doing what it does best, this one sounds like Saga at their Proggiest, circa 1981. Mover’s percussive illustrations are deceptively complex and give the appropriate hues and accents to the music. Featuring the great Mike Keneally on guitar, this is a purposefully dramatic soundscape that perfectly accompanies Sadler’s highly expressive vocals. The song describes a man that has reached the end of his tether, and it will speak to anyone who has been manipulated, abused or defrauded, whether personally or in business.

‘The Watchmaker (Time on His Side)’, has already been released as a single and a lyric video produced by Mover. With a distinctly ‘70’s feel and look, the heavy rhythm and guitar leads of Lyle Workman lock into Dave Meros’ weighty bass-lines, both galvanized by Mover’s propulsive drumming. It is a straight-ahead raucous rocker that delivers the more corporate side of Okumoto’s compositional skills, with a driving and uncomplicated beat. It must be said that the lyrics are a little quizzical, seemingly about a chronometer-maker whose workings are so precise that he can control time. The lyrics did not quite resonate with me, but this notwithstanding, the song is an excellent simple rocker with a linear groove. Okumoto’s writhing keyboard runs reassure us that he has not in any way ‘gone commercial’, and that Progressive leanings underlie everything he does. His unmistakable Hammond Organ and Mini-moog are never far from hand in the song, and co-composer Michael Whiteman provides soaring vocals over the granite groove. If any track on the album was intended to be a commercial hit, this is the one.

‘Maximum Velocity’ maintains the melodic Rock value proposition, but this time with a space-faring theme that is not Star Trek related. After a gorgeous acoustic intro, the music builds to keep pace with the celestial subject matter. The Okumoto Inc Board Meeting has by now gathered full steam and this particular debate happens to be a cosmic one. A mid-tempo rocker about space travel and the rocket launch sequence that initiates it, NASA could easily use this song as an introduction to their next press conference. The track features a stomping solo from Steve Hackett, ably backed up by Marc Bonilla on acoustic and rhythm guitars. An ascendant lead vocal is provided by Michael Whiteman and complex alternating time signatures are beautifully presented by Mover. This one will literally soar if it gets performed live – one can just imagine the inter-galactic science fiction video images that will be displayed while the band launches into it.

‘Chrysalis’ is a haunting and beautiful ballad about the very apposite topic of solitude and isolation, presented in a varied palette of colors. Featuring the unmistakable melody and funk combinations of Living Color bassist Doug Wimbish, the musical agenda does not end there. The song contains one of Okumoto’s trademark piano arpeggios and a hypnotic hook. Lead vocals and guitar are beautifully performed by Randy McStine, whose emotional singing and brilliant six-string technique complement the sadness of the composition to perfection. Expect your heartstrings to be torn – especially those of you who have recently been affected by quarantine and enforced solitude. One of the stand-out tracks on the album, this track heralds that McStine and Okumoto should make a habit of working together. Massive potential is revealed by this wonderful song.

Title track “The Myth of the Mostrophus”, is a 22-minute monster-fable epic that returns us to classic Spock’s Beard sounds, featuring largely Spock’s Beard members and ex-members. Included in the line-up, of course, are Nick D’Virgilio on lead vocals and drums and Ted Leonard on lead vocals. D’Virgilio’s percussive flourishes are, as always, stunning in their emotion and precision, once again reminding us why he is one of the most in-demand drummers in the game. Dave Meros and Alan Morse are no less prominent on the track, and Mouser’s production really comes to the fore in this familiar territory. To complete the Beard association, Jimmy Keegan provides excellent backing vocals. There is even a sax solo that, strangely, would not have sounded out of place on a Spock’s album. With a presentation that may as well have been on ‘Noise Floor,’ the song’s line-up is described by Okumoto in the press bio as ‘Ryo’s Beard’. Indeed. The song is a fable-like journey of cinematic proportions about a gargantuan monster destroying the world. What follows the intro is an experience not unlike ‘The Return of the Giant Hogweed’ meeting ‘Godzilla’ meeting ‘War of the Worlds’ – only it takes place in Basingstoke and in 7/8 timing. Getting rid of the Mostrophus and saving the human race is apparently no mean task – one that warriors, scientists, armies and air forces cannot achieve. But guess who can? A singer in a Prog Rock band, that’s who. The protagonist creates a melody that is sung by the people of Basingstoke and the singing somehow combines to drive the monster out, after which Andy Suzuki’s outstanding sax solo heralds the creature’s demise. With Leonard’s and D’Virgilio’s vocal commentaries telling the story in a highly entertaining and graphic manner, the Classic Prog is well and truly in place with this song. Quite frankly, music does not get much more Proggy than this, whether in respect of title, theme, composition or execution. From gentle flute refrains to a slow march layered with a typically strident Alan Morse solo, from dramatic sound effects to cinematic lyrics that must have been an absolute marathon to create, the song tells a highly engrossing story. Though presumably written by Okumoto, one feels that D’Virgilio’s storytelling experiences in Big Big Train must have played a part. This one has the makings of a future Classic Prog epic.

I have not heard the two Japanese edition bonus tracks, entitled ‘Waiting to Be Born’ and ‘Sonny,’ both of which are no doubt about the birth of Okumoto’s son. However the six tracks that are present on the non-Japanese release combine to create a 70-minute experience that is satisfying and highly fulfilling. Okumoto makes no bones about the fact that his intention was to satiate the hunger of Spock’s Beard fans with the opening and closing tracks, a mission which is well accomplished, but those fans and many more will enjoy the remaining four tracks just as much. With Okumoto’s keyboard antics providing constant delight throughout the album, and a line-up as varied and accomplished as this, how could they not?

The album is available in a CD Digipak, a 2-LP plus CD package in black vinyl, a special limited edition 2-LP red vinyl (only 300 manufactured) plus CD and a Japanese CD edition with the two bonus tracks mentioned. The production is suitably complex, sympathetic and pleasing, under the expert stewardship of the President of Prog Production, the excellent Rich Mouser. If sound quality were corporate profits, this album would be listed on the Stock Exchange.

In the absence of a new Spock’s Beard studio album, ‘The Myth of the Mostrophus’ most certainly provides much-needed dividends to members of Spock’s Beard’s Fan-base. It also taps a broader market and might even have a hit song or two on it. This project is more than successful from either perspective, and all those involved may give themselves a hearty pat on the back – most notably the CEO of Prog Keyboards himself. The resolution is passed and the directors have delivered above and beyond expectations. All in all, this product is a winner. Meeting adjourned.

Released on July 29th, 2022 on InsideOutMusic