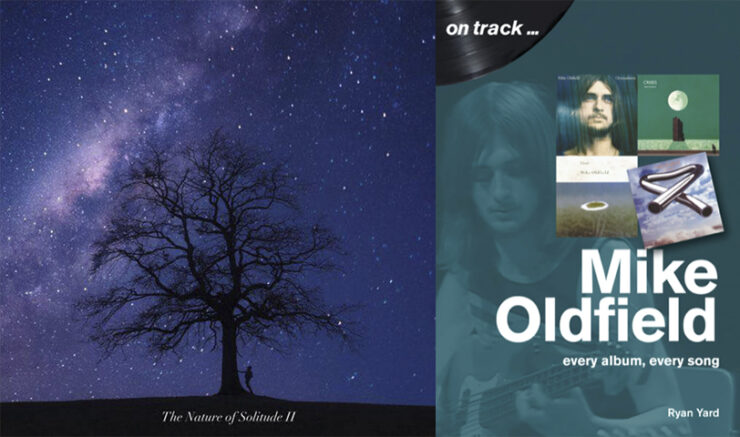 Review of Ryan Yard’s album ‘The Nature of Solitude II’, and his book Mike Oldfield – Every Album, Every Song.

A recent poll of the Greatest Prog Musicians of all Time had a name in the Top 20 which surprised some of my friends – that of Mike Oldfield. Not so much of a surprise to me, as his music was, for the Young Bailie, a gateway into this world of long songs, intricate playing and carefully crafted music that wasn’t about Verse/ Chorus/ Repeat.

I’ve also been a big fan of Sonic Bond’s On Track: Every Album, Every Song series and so a Mike Oldfield edition was a must have as far as I was concerned. It’s a really great book that explains the inspiration and musical structure in a “read along while listening” way! I’ve known all of the albums for a very long time and it was great to learn new things I hadn’t appreciated about what I was hearing (the definition of a good music related book in my opinion is that it makes you hear the music in a different way). This one also serves as a great guide to an explorer… Mike’s output up to 1983/4 is quite well know to many in the U.K., but he produced some amazing albums like Guitars and Voyager in the 1990s which are less well known. The full catalogue is covered with the same amount of detail and comment given to the recent albums as to the earlier classics.

Ryan Yard, the author, is not only well placed to write such a book but is also a musician in his own right. His latest album, The Nature of Solitude II is an instrumental sequel to his 2017 album, consisting, as it did of two instrumental of approximately 20 minutes length. Being a multi-instrumentalist, Ryan plays almost every instrument with some assistance on guitar from Carl Major.

It’s an album of shifting moods and melodies, with the emphasis on the mellow – and that’s entirely as it should be! In the liner notes, Yard explains how the current times have led, for many of us, to increased periods of solitude. Questioning himself during that period, he arrived at the conclusion that what makes him truly happy is making music, hence the album! The phrase “mind medicine” is used and it’s the best way I could describe this listening experience. This isn’t ambient or bland “new age” music of the 1990s – the construction and playing on this album are exquisite. Each “side” is a single track but the moods and instrumentation move and shift, focusing on the various elements, then bringing them together.

The Mike Oldfield influence is clear when the guitars of all varieties intertwine, and fade to keyboard segments, but it isn’t a parody or clone. Yard brings his own textures and inventiveness and part 1 ends with a pastoral melody played on keyboard/ recorder which stands out in my listening. I’m particularly fond of the several of the parts where the bass guitar takes the lead, and there are some great guitar melodies at the conclusion of part 2. Buyers of the CD are treated to two bonus cuts, the guitar focused The Song of the Swan, and the more orchestral Song of the Butterfly with chiming harmonics – the playing on both of these tracks brings David Gilmour to my mind.

It may sound like a cliche, but this is an album where you should dim the lights, grab a mug or glass of your favorite hot or cold beverage and just let the music wash over you. Enjoy the nature of solitude and the refreshment of the music.

Ryan Yard: The Nature of Solitude
Available from www.ryanyard.bandcamp.com