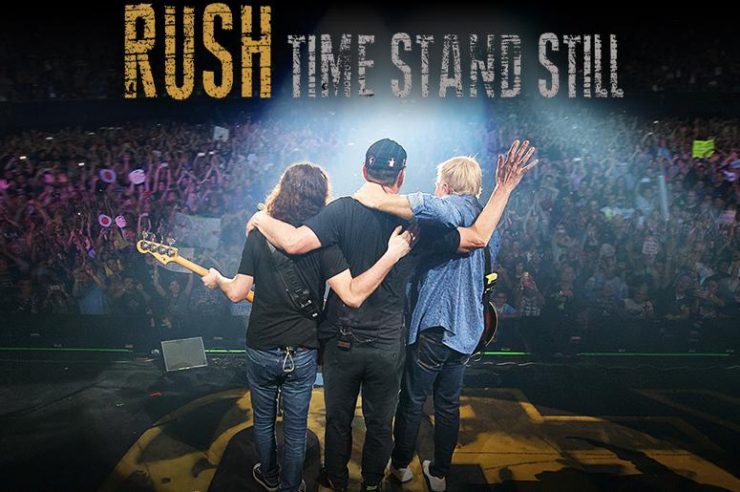 A review of the documentary film, Time Stand Still

Rush’s R40 tour was a monumental event that found the band revisiting their entire awesome history as they were struggling with the prospect that it might be their final tour.  With the behind the scenes documentary of that tour, ‘Time Stand Still’, the fans seem to get the unofficial, but official, word that it was the final tour (at least until a comeback tour).  This is not only a movie about the band for the fans, but a movie about the fans, as well.  The filmmakers do the unique here by making the fans’ love and loyalty of the band seem just as important as the band itself.

This is also a movie for the hardcore fan.  For the uninitiated, all the fan gatherings, Rush-con events, and hordes of fans that claim to have seen hundreds of shows, might seem un-relatable. But in fact, these are fans that find their identity with this band, much like fans of any sports team, and that, in itself, is special.  Few bands in history can claim to have had this affect on people. Mixed in clips like the Rock N Roll Hall of Fame induction ceremony, where the band received the loudest applause, help make the point.

The bond between Geddy Lee, Alex Lifeson, and Neil Peart, is unlike any other band and it is visible in the interviews and classic live footage in the film.  They are like brothers who understand each other in every way.  It is interesting to see how Peart has continued to remove himself from the band to pursue other interests.  He worries more about where he will bike at the next city rather than any drum fill or song.  This makes his immense talent all that more impressive.  At the same time, it is visible in Geddy Lee that he could tour for another ten years, but will not do it without his brother.  It is honorable, touching, and sad at the same time.

Ultimately, this documentary is more for Rush fans then the general music fan, but it does help any music fan understand what all the fuss is about.  It is about the bonds built within the band and the fans.  It is a brilliant testament to the band’s will, effort, and love of music that their fans are so loyal and dedicated.  That is something to be truly appreciated here.  There is also a lot of joy and laughter in the film.  This is not just any band.  It is Rush.  And hopefully, it is not the end.

Track Listing:
When I Was a Kid
It’s a Really Hard Life
A Huge Accomplishment
Building R40
Fan-Tastic
Hello Toronto
‘Ride On’ Neil
Your Weakest Point
Marathon Not a Sprint
At Road’s End